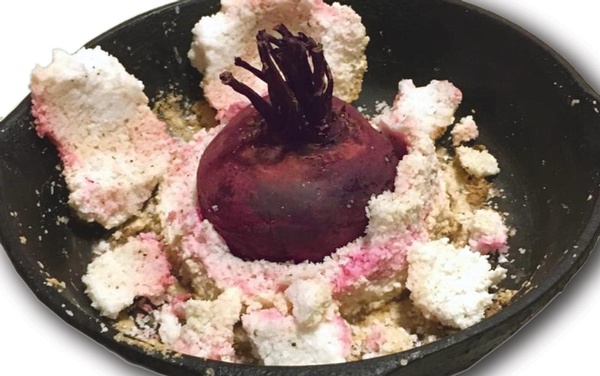 Beets are a challenging food. No vegetable feels so much like work – or tastes so much like dirt. Which surely means beets must be supremely good for you.

But dense tubers are problematic to mess with. You can’t just rifle through the fridge, find some beets, and add them to your rice pilaf like you can with kale or a spare carrot. Beets will take over anything they touch, spreading their reddish purple hue and earthy sweetness to places where they may not be welcome. As it colors your food, beet will even dye your insides, as you will be reminded in a few hours.

Beets are a commitment. Cooking them takes a certain kind of mental preparation. You need to kind of take a deep breath, as you would before diving into water or participating in hand-to-hand combat. If you don’t psych yourself up a little, or if you get a little too relaxed in there, things could get ugly.

Beets do not shine in single-pot meals, unless that meal is beets. Like dark and mysterious horsemen that turn out to be good guys, beets often ride alone. I can’t help but notice that beets clash with a lot of my favorite foods, like eggs, noodles, rice, beans, hot peppers, and basically anything at a potluck. The easiest way to love a beet, generally speaking, is to keep it away from everything else.

Consider pickled beets, which everyone loves. Especially if they are in a bowl, next to some toothpicks with which you can cleanly spear one and then toss. When not in use, pickled beets are safely enclosed in hard, impermeable glass jars that prevent their contents from mixing with corn flakes, milk and other non-approved substances. You take what you need from the jar, do what you need to do, and close it. Just don’t break it, because a broken jar of beets is more of a problem than, say, dilly beans.

Here are two of my favorite ways to cook beets in solo fashion, along with a bonus: how to secretly add beets to one of the most popular foods in the world.

Trim the tops and bottoms, and peel the beet skins if you wish. Cut each beet in half, tip to top, and lay the flat sides down. Slice as thinly and evenly as you can – ideally about a ¼-inch thick. Toss the slices with olive oil, and then add salt, garlic powder and black pepper. Bake at 350 for about 45 minutes, or until they develop a dry skin that cauterizes the purple red flow. Be careful not to overcook, as their sweetness will quickly turn to bitter. Let them cool and serve with Double Balsamic Vinaigrette: 1 tablespoon each of red balsamic and white balsamic vinegar, and olive oil.

In addition to being tasty treats in their own right,

these chips are a useful ingredient in other recipes, especially ones that call for beets that, for whatever reason, you want to tone down the beet. Sometimes, for example, I roast beets like this before making borscht; that roasted skin helps the beets restrain themselves from oversharing.

This is the ultimate in hermetically sealed beet segregation. The throbbing root is contained within a rock hard castle of chaste white purity. It appears, from the outside, as if a hydrothermal vent from the bottom of the ocean set up shop on your frying pan. And it requires, without question, a gratuitous use of salt. And I haven’t figured out a way to re-use it, besides repackaging it and selling it as some exotic pinkish salt. So I end up throwing it away, as it’s no use in the chicken yard or compost pile.

While it uses more salt than is necessary for cooking a beet, what it does, nonetheless, is special. If you’re looking for an impressive way to help someone appreciate a beet, this is it.

You will need about a cup and a half of salt per beet.

Trim a flat spot on the beet’s bottom, and leave up to an inch of the tops.

Mix a cup of salt with a teaspoon each of black pepper and garlic powder, and stir in about a quarter cup of water. Work it together until it reaches the consistency of a snow cone that’s just cold enough to not be drinkable by straw. If it’s too wet, add more salt and mix it in.

Put a wad of this salt mortar on the bottom of a cast iron pan or other baking dish. Place the beet on top, and pack the salt around it. Mix up more salt mortar if you need it. When fully encased, bake for one hour at 350.

Remove the dish, and while it’s cooling, figure out how you’re going to break the beet free of its salt tomb. A hammer works. I would not try whacking it with a jar of pickled beets, as the baked salt is very hard.

When the crust is broken, remove the beet and brush it off. The texture is supple, and the flavor is a deep sweetness that is seasoned but not upstaged by the salt.

Serve it sliced, drizzled in Double Balsamic Vinaigrette. To put it over the edge, make slices of brie or other creamy soft cheese available. On the side, of course.

And if one does feel the need to add beets to an existing dish, I would pick one that already shares the relevant flavors and colors of the beet. Chocolate cake, in other words

It may sound crazy, but grating beet into your favorite chocolate cake recipe is a pretty sweet move. Literally. The bitter and sweet flavors of beets mirror similar qualities in chocolate, allowing the beet flavor to disappear into the chocolate. Ditto for the color – chocolate is one of only a handful of foods that beets can’t stain.

An average-sized box of cake mix can accommodate about a cup of grated or pureed peeled raw beets. If you don’t believe me, try with just half a cup. You won’t notice much except maybe a little more moistness.

So yes, beets can in fact play well with others. But for me, in day-to-day, non-cake-eating life, my beets won’t be mixing with much more than salt, vinvinegar, garlic powder, black pepper and oil.