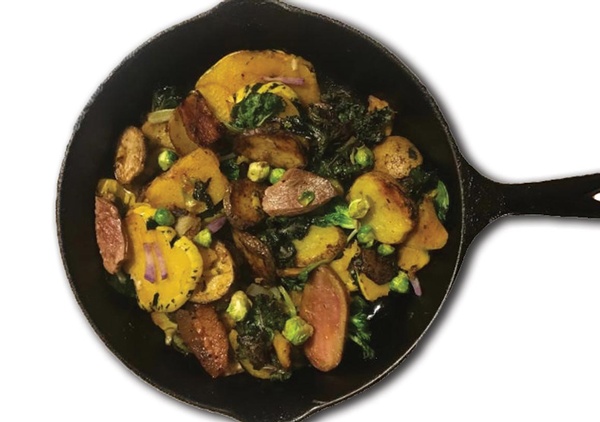 Every action figure has a special tool that defines who they are, by virtue of what they do. A construction worker may carry a hammer, a wizard wields a magic wand. And if there were kitchen action figures, each would carry a special utensil as well. One might brandish a chef’s knife, while another holds a submersible blender. Some cooks can get by with a can opener, while others need a mere bottle opener. And if there were a Chef Boy Ari doll, it would brandish an over-sized cast iron pan.

I collect cast iron cookware, of all sizes, the way others collect guns or shoes. Each piece in my collection has its own niche in my kitchen ecosystem, from the adorable 6-inch personal breakfast pan to the Dutch oven, and of course the 12-incher that I use most often. But at this time of year, a pan that’s large enough to feed the whole family is the one I turn to, when a slow, Winter Pan for dinner is in the cards.

The Winter Pan isn’t a specific recipe so much as a way to use a pan to cook any and all cold-weather ingredients, including root crops like potatoes and celeriac, honorary root crops like winter squash, and other storage crops like onions, garlic, carrots and bacon, not to mention winter greens like kale, spinach, Brussels sprouts and the like. The Winter Pan is also an opportunity to display one’s proficiency with a cast-iron skillet, as roping a calf demonstrates one’s skill with a lasso. The calf doesn’t always run the same pattern, just as each Winter Pan will use different ingredients and require a different procedure. As the cowboy has to adjust on the fly to the conditions of a particular circumstance, the pan expert must do the same. If you’re good with a rope, it doesn’t matter how elusive the calf is. And if you’re good with a cast iron pan, you can cook anything you want.

Before we get into the Winter Pan, some words on cast iron cookware are in order. Many people are intimidated by it, thanks to a long list of specific needs, most of which are geared to protect the pan’s seasoning: that thin black coating on the exterior of a pan to which chefs are expected to revere the way organic farmers worship their topsoil. And there are so many rules about what and what not to do with cast iron that you’d be afraid to use it if you listened to them all.

Bon Appetit even cautioned against cooking eggs in cast iron. Eggs! “Be wary of scrambled eggs and frittatas, which can get gummy and stick to a poorly seasoned pan.” Similar directives against cooking tomato sauce or deglazing with wine in cast iron, as well as soaking overnight and washing with a course scrubber, all followed a similar pattern: don’t do it, unless the pan is really well-seasoned.

But a good seasoning isn’t that fragile. My pans never lose their seasoning, which I make no special effort to maintain, other than avoiding the use of soap when washing them. Basically, the more you use your cast iron, the better-seasoned it will be. Especially if you cook with a lot of fat.

But giving credit where it’s due, that Bon Appetit article did give me a great trick: wash the pan with salt and olive oil. The gritty salt busts up even the most browned of coatings, and the oil floats off the pieces. Supposedly the salt trick is also good for the pan’s seasoning. A true pan jockey is always on the hunt for new moves.

So don’t be afraid of your pan. Just cook with fat and everything will be fine. And better yet, be a slacker and leave the pan out all night with a congealed puddle of grease before washing it. That really helps.

The Winter Pan is a simple recipe, but how it’s interpreted depends entirely on what the ingredients are, and what they need to be their best. Along these lines, I’ll break the recipe into steps.

Step one: Prepare the Pan. In my house this is a euphemism for “cook some bacon.” I keep it frozen so it’s easy to chop into little pieces, as I’m going for bits, not strips. If I can get my hands on some guanciale, which is Italian-style jowel bacon – especially one with a good hard cure – I do so. It’s fattier, for one, and the fat is why we like bacon. When cooked slowly, it tastes like fried chicken skin. Olive oil is a great oil too. A mix of olive oil and butter makes for a decadent flavor, and won’t burn as easily as straight butter. Fat can be added to this recipe at the beginning, middle and end, from bacon to mayo.

The heat under the pan should be at medium or less. This dish gets ruined if you rush.

Stir judiciously, maybe four times at the most over the course of an hour. When you do stir, do it gently, with a spatula or other flat-bottomed utensil, scraping the bottom of the pan clean as you do.

Step two: Add dense ingredients, the ones that need a while to cook, like potatoes and slices of squash. I don’t peel my winter squash. I just slice it into half-inch slices. Cut potatoes equally thick. Add a layer of potato slices first, followed by a layer of squash, and any other veggie that needs a lot of cooking, like carrots. Add a few whole cloves of garlic if you wish. Let it slowly cook and brown and get delicious. Pour in more olive oil, add more butter.

Step three: Maintain proper moisture. This is crucial for a long, slow pan, because you don’t want to stir it too often, which can break the veggies, and you don’t want stuff to burn. You can add moisture by simply adding water. Moisture can also be added with a layer of chopped onions or cabbage, either layered on top or carefully stirred in. After adding moisture, I often cover the pan to steam the upper layers. Frying and steaming at the same time, we call it freaming, can be a powerful technique.

Step four: Add delicate veggies, starting with the toughest of the lot, like cauliflower florets or Brussels sprouts, followed by tougher greens like kale, and finally tender ones like spinach or tatsoi. At this point, add fresh garlic, minced, pressed or grated. Add cheese now, if you wish. Put the lid on one more time after splashing in a final bit of water, to wilt the tender greens and melt the cheese.

Once you have the proper skills and wisdom, a recipe for a winter pan – or a spring, summer or autumn pan for that matter – can be written as a simple sequence. For example: bacon/radish/carrot/cabbage/garlic/oyster sauce, for example.

In between proper meals, prepare the pan and experiment with the heat on low. Add something, and see what it does. A sparse pan filled with a diverse assortment of goodies is a beautiful thing. And what you learn about your ingredients, and your pan, will improve your cast iron improvisation skills. At that point, with pan in hand, you won’t need a plan.