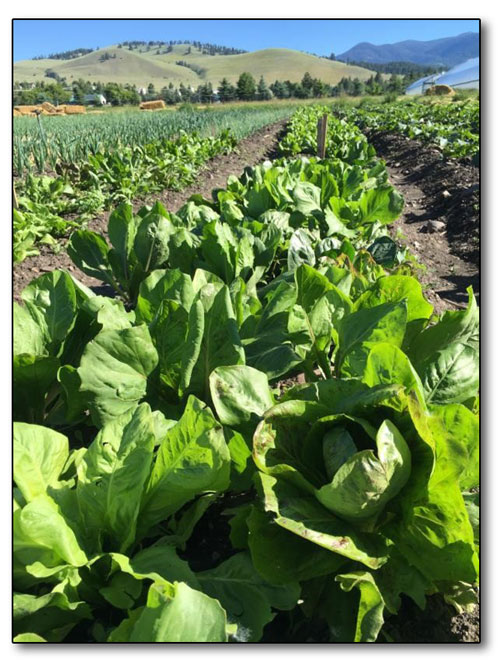 At an airport salad bar in Rome, recently, I filled a plate with leaves. It was a basic cafeteria salad bar, one that in the U.S. would probably be dominated by a large bin of iceberg lettuce laced with carrot shavings. But instead of lettuce, the leaves were chopped escarole and radicchio. Dressed with oil and vinegar, they were crisp and watery. And they were bitter, a taste I have been coming to appreciate.

By this point in my travels I was well aware that the Italians are ahead of the curve when it comes to eating chicory, the family of bitter-leafed plants that also includes endive and dandelion. At various stores and markets along the way, I had picked up several seed packets of different chicories, like the stately, thick-stemmed Catalogna that looks like a dandelion on steroids, or the Rossa di Treviso, a leafy radicchio shaped more like romaine than the typical tight radicchio head. These and several other equally interesting varieties would become the basis, when I returned home, of the chicory project.

The chicory project, which also includes Italian chicories ordered from GourmetSeeds.com, is now fully under way at an area farm. We are investigating which varieties do well in our climate, while playing with different ways of serving it that might appeal to the locals.

This last part is kind of a tall order, as we are programmed to reject bitterness from an early age. Newborns will scowl at the taste, and for good reason: most toxic substances are bitter. Our default status, thus, is to avoid them all until we learn otherwise. Like, say, when we learn about beer, or mixed drinks that contain bitters. Or coffee. Or chocolate. Or something charred on the grill.

The American palate is catching on to the dark flavor of bitter. Dark chocolate is increasingly popular. Dark roasted coffee is all the rage. But how dark is too dark? Everyone has their own comfort zone. I personally think dark roasted coffee tastes burnt, and so I always order the lightest roast. Similarly, I don’t like my food blackened on the grill.

Many bitter flavors from plants come from the presence of glucosinolates, and other plant defense compounds, that are toxic to insects and worms and other hungry critters. But at the levels we humans consume, these molecules are not dangerous and are showing promise in actually preventing a variety of diseases.

Meanwhile, fiber. One hundred grams of escarole only contains 17 calories, but has nearly 10 percent of your daily fiber requirement. The bitter leaves tend to be stacked with other nutrients as well, like folate, and various antioxidants, and readily accessible forms of minerals.

There are ways to remove, hide and blend away the bitterness of chicory. You can soak the leaves in ice water, balance the bitterness with fruit or a sweet dressing, or combine it with other bitter foods, like mustard, to create a smooth continuum of bitter flavors. You can braise chicory leaves in butter or melt the stems into a fatty sauce. But the best way to deal with these and other bitter foods is to embrace them, head on, and celebrate them for what they are.

I don’t know anyone with more of a chicory habit than my wife. And those tight burgundy radicchio heads, dreadlocked frisse and grand Batavian leafed escarole aren’t cheap. Which, admittedly, is a big part of my interest in the chicory project.

Like the Italians, she equates a strong bouquet of bitterness with complex flavor, while mild lettuces no longer hold her interest. She has two primary ways of using chicory. They are both exceedingly simple, and instructive to those bitter-curious who may be interested in embarking on this path.

One method is to use leaves like tongs, to grab and encase food en-route to one’s mouth. The food that is grabbed could be anything. A bit of crumbled hamburger patty, some onions, tomato and mustard, and a radicchio burger bite is ready to go down the hatch. A leaf-grab of ratatouille, or a bitter leaf-bite of some other salad. Some people bring their own plates to potluck dinners. My baby, she brings heads of radicchio.

The other way she eats chicory is via what I call the “chip and salsa” technique. She makes a salad dressing of two parts olive oil to one part vinegar, with the vinegar portion split equally between cider vinegar, balsamic and white balsamic. Then she adds soy sauce to taste.

She then dips prepped leaves into the dressing like a chip into salsa, and chomps them down. How the leaves are prepped depends on the type of chicory, her mood, and how much time she has. The only requirement is that they be cleaned.

Freshly gathered dandelion greens are eaten whole, two or three at a time, and folded in half, with the fold dunked in the dressing. This shape holds the dressing for the potentially messy journey to your mouth. With radicchio, my wife will sometimes cut the head into wedges, which also hold dressing very well, having oozed between the leafy layers.

One enjoyable combination of both of these methods is to wrap a thick chunk of bacon or other meat in the leaf, and then dip in dressing.

If she has the time, my chicarista’s all-time favorite way of eating chicory is in a big salad tossed with this dressing: In a blender (or other processor) whizz ½ cup olive oil with a few cloves of garlic, and ¼ teaspoon salt. When smooth, blend in the juice and some zest of a lemon or lime and a tablespoon of white vinegar. Adjust salt and vinegar to taste.

There are all kinds of interesting recipes out there for braised radicchio, wilted escarole, endive torte, and many others. Enthusiasts of cooked chicory praise how it mellows the flavor, and how it adds to sauces. But after adapting my palate to the crisp texture of the raw stuff, I have no interest in soggy chicory. And I don’t want to mellow the flavor anyway, because I’m into bitter. I’ve acquired the taste, and I can go there by myself without training wheels. I’m a chicory grown up.