The fungus among us 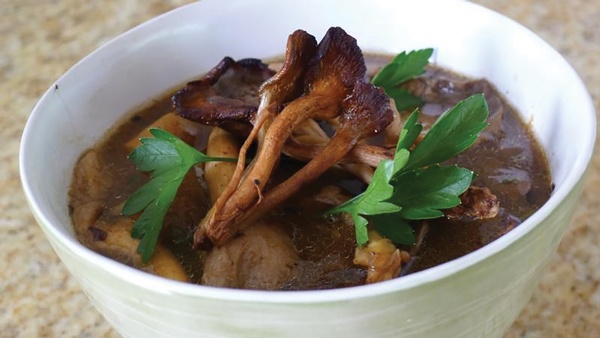 With the melting of snows and falling of rains, edible mushrooms are poking through the soil and hanging off logs, adding magic to the forest and glory to the dinner plate. These rot-eating beings reside mostly within the decaying materials they consume, in the form of tangles of thin fibers of fungal cells called mycelia. The colorful array of mushrooms that grow from the world’s mycelia are reproductive organs, also known as fruiting bodies. They appear and release their spores when the mycelia decide it’s time. And foragers are ready to pounce.

We love wild mushrooms for their lusty vibes and meaty, earthy flavors. Cultivated mushrooms like buttons and criminis have these qualities too, but in much smaller doses. Morels, porcinis, chanterelles and other celebrated wild mushrooms, meanwhile, are every bit as savage as a hunk of hunted elk, and their flavors carry the essences of the wild places where they were gathered.

Oyster mushrooms, both cultivated and wild, are rich sources of glutathione and ergothioneine. Glutathione is one of the most powerful known dietary antioxidants, while ergothioneine, also an antioxidant, is an amino acid made exclusively by fungus. Laboratory evidence suggests ergo, as it’s called, can protect cells from multiple toxins, and researchers have recently discovered that mammals have a specific transporter molecule that pulls ergo into red blood cells, which transport it elsewhere in the body. Ergo and glutathione are present in all mushrooms, although the white button variety have the lowest concentrations, while oysters have among the highest.

Button mushrooms may be more dilute sources of flavor and healthfulness, but they are also much cheaper than wild ones, so you can eat more of them for the money. Buttons are one of the very few mushroom species that you can eat raw, and while they lack the excitement and musk of the outdoors, that kind of puffy white domesticated fruiting body still has a place.

When wild mushrooms are on the menu, you can get extra mileage combining them with buttons, which will absorb and carry the wild flavors from their outdoorsy cousins and come to taste like their counterparts. It’s like buying buttons at home, waving a magic wand over them, and turning them into morels, porcinis or whatever you cook them with.

Here is a recipe that works with all wild mushrooms, including combinations of multiple wild and cultivated types. Slice and saute? them in butter with roughly equal parts chopped onions. Season with salt, pepper and a pinch of nutmeg. Deglaze with sherry once or twice. Serve as is, or add cream and a squeeze of lemon.

The other day I went hunting for oyster mushrooms. The rains had come and gone, and I fully expected to get armpit-deep in fungus but came up empty. Mushrooms, it turns out, are better at knowing where they ought to be than I am. But I had a lovely walk among the woodpeckers and cottonwoods in a certain creek-side habitat. (Don’t forage for wild mushrooms unless you know what you’re doing, btw.)

A few days later, at the farmers market, I was buying cucumbers and noticed farmer Mike had oyster mushrooms for sale. I bought a sack and went fishing for recipes.

Mike, who has long white hair and a weathered face, wore a shirt that said “Gardening is cheaper than therapy, and you get tomatoes.”

“I’m pretty boring,” he demurred. “I’ll throw some mushrooms on the grill with some meat or fish, and steam some broccoli, and that’s about it.”

“Why are they called oyster mushrooms?” I asked.

“Have you ever tried making chowder,” I asked?

“Actually, yeah,” he said, his face brightening. “I have an oyster mushroom chowder that I kind of invented. I went through my cookbooks – I’ve got like 100 cookbooks – and read the clam chowder recipes, and kind of put one together with some of my own touches.

I’ve made Mike’s chowder a few times now, and I don’t blame him for being proud. It’s rich and creamy and chowder-ry with strong fungal presence, hitting gentle notes that are at once luxurious and untamed, with a quiet, rich soulfulness. Being who I am, I had to tweak, adding thyme and sherry, and slow-fried oyster mushrooms and parsley as garnish. In one batch, I tried clam stock instead of chicken, in honor of clam chowder, but it was a resounding dud. Chicken stock is the one to use with mushrooms.

This dish can also be made without the cream, for a lighter-yet-earthier version. If skipping cream, skip the red pepper too.

Fry bacon until crispy on medium heat. Add onions and celery. When the onions are translucent, add flour and butter, stirring often into a gently brown roux. Add the potatoes and stock, stir thoroughly and simmer for about 30 minutes, until potatoes are cooked. While it simmers, fry some oyster mushrooms in butter very slowly, so they get deliciously crispy.

Season the soup with salt and white pepper to taste. Add mushrooms and simmer for 10 more minutes. Add cream and red peppers, if using, and simmer an extra five minutes on low. Garnish with parsley and fried mushrooms, and serv