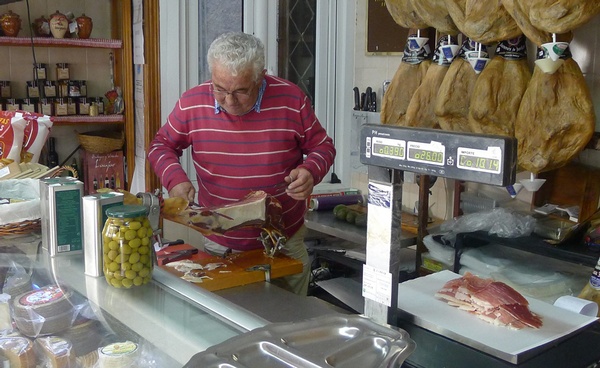 About halfway through our family trip to Andalusia, the U.S. restricted air travel from Europe, and Spain declared a state of emergency. The geopolitical and pandemic crosscurrents at play were difficult to read, even from the rooftop terrace of our house in Guajar Faraguit, a quiet village in the hill country above the Strait of Gibraltar. We tried to sniff the breeze for guidance, but all we could smell were lemon blossoms.

I sipped red wine into mouthfuls of manchego and jamon. My wife took her manchego with vegetables, while the kids munched avocado toast and drank home-squeezed orange juice. We were surrounded by clean water, carefully tended groves of olive, citrus, almond and avocado, and not much else. If an algorithm were programmed to find the perfect location in which to weather a pandemic, it would find places like Guajar Faraguit, in the sparsely populated, dead-end valley of the Toba River.

Our flight home just more than a week away, and there was a growing possibility of being trapped in Spain for an indeterminate amount of time. But the journey home looked like a slow-motion nightmare of terminals clogged with long lines of coughing, irate passengers and every other circle of airport hell Dante could never have imagined.

After a few days in the mountains, we went shopping in Lanjaron, a village in the foothills of the Sierra Nevada. As we walked toward the municipal market, the police stopped us and sent my wife and kids back to the car. It was a drag to shop alone, but I was glad to see Spain determined to not become the next Italy.

The Lanjaron market is a stage for the finest ingredients Andalusia and Spain have to offer. Citrus, peppers, artichokes, a diversity of avocados, two boxes of strawberries, black tomatoes, pomegranates, potatoes and oyster mushrooms from a produce stand, bread and pastries from the bakery, a side of lamb ribs from the butcher, a sack of seafood from the fishmonger: mackerel, red shrimp and flying squid (capable of launching 100 feet through the air).

My arms were burning when I made it back to the car, itself on the verge of spontaneous combustion from the friction within. We drove to my go-to jamoneria, Jamones Pozo, and double-parked on the narrow street in front.

Santi had my order wrapped and rung up, including the jamon serrano, a local ham cured in multi-story structures in the mountain communities of the Sierra Nevada – a region called the Alpujarra, of which Lanjaron is the gateway. To go with my jamon, a final round of Alpujarran sheep’s milk cheese, a number of bottles of local red, a jar of olives, two sacks of oranges from Santi’s tree, tins of olive oil from the Lanjaron press, and a locally crafted chess board made of walnut and lemon woods, wrapped carefully for protection and also discretion – the police had zero tolerance for “non-essential” purchases. In front of his shop, Santi and I hastily bowed goodbye.

The next day we hiked along ancient Moorish roads and irrigation ditches above Guajar Alto, at the top of the dead-end Toba Valley. I picked handfuls of wild thyme, fennel and rosemary. As the kids played by a creek, I checked the phone, and the world.

The death toll in Spain had doubled again, to about 500. Italy was closing its borders and shutting down air travel, and the American Airlines representative we reached by phone said our scheduled flight home might be cancelled.

When is the next flight out of Spain? I asked. The next morning, out of Madrid, she said. Madrid is a six-hour drive from Guajar Faraguit. We made the change and gathered the kids.

Our plane left in 12 hours. The kids showered, my wife made salads, and I rubbed olive oil into those lamb chops, along with sea salt, garlic and freshly gathered wild thyme and rosemary. I got to grilling one last time on that Andalusian rooftop, and we feasted on lamb, salad and leftover soup. Then we cleaned up the kitchen, gave the rest of our food to our neighbors, did the idiot check, and bailed.

The road to Madrid was fast and, except for trucks, completely empty. The toll booths were empty and open. The rental car company didn’t answer the phone, so we left the car in the Budget lot, six days early and in the wrong city.

We had these extra-toxic death wipes that sterilize anything and used them to wipe down a corner of the empty Madrid airport for us to doze until morning. I nibbled on leftover lamb ribs, finally able to wash them down with the rest of our wine, and pined for a microwave.

The plane to Dallas was extra-clean and nearly empty, with a crew of spunky flight attendants in good spirits. I fell into a deep state of chill, and awoke remembering Santiago’s jamon. Customs would not allow Spanish pork into the U.S., so I had work to do. Noticing my project, my impish flight attendant placed the entire bottle of red wine on my tray table.

“Tengo mucho jamon,” I said, gratefully, and a little helplessly. (I have much jamon.)

“I’ll get some bread,” he replied matter-of-factly in Spanish, the only language he appeared to speak.

The two of us were still in Spain, somewhere above Louisiana. High above COVID-19, but not for long. I asked if he wanted any jamon for the road. “I can’t bring it in either,” he said.

I assumed the plane would return to Madrid after taking us to the States, but it turns out neither plane nor crew were going back any time soon. Our flight, AA37, was the last American Airlines flight out of Spain – and that jamon was my last taste of the beautiful country, at least for a while.