The moving target of hardiness 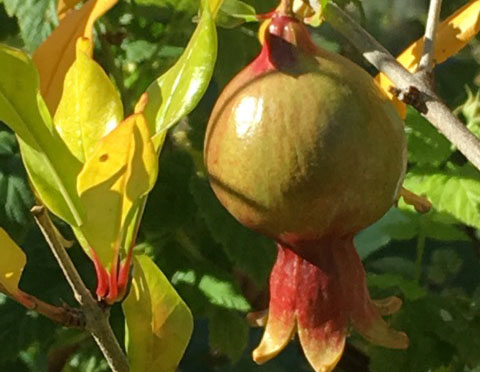 Pictured above: A viable Montana pomegranate just may become a thing if current USDA hardiness zones continue their northern march.

This is the time of year to think about planting trees. It’s a powerful, important and often fruitful thing to do, as well as a seriously long-term commitment. Planting a tree requires a deep look into the future, and the making of decisions based on one’s best guess for what that future holds. On a planet that wasn’t warming at an alarming rate, planting a tree would require forethought. But as it is, with the climate shifting around us, planting a tree is like aiming at a moving target you can’t see.

The USDA plant hardiness zone boundaries are marching steadily northward, as can be seen on a map loop at climate.gov. In the 15 years since my friend Tom McCamant planted his peach orchard in northwest Montana, his land has been reclassified from Zone 5b to 6a.

It wasn’t long ago that if one wanted peppers here in Montana, one had to plant them in a greenhouse. Now we get outdoor peppers every year. Ranchers that used to get two cuttings of alfalfa are now getting three. Pasta makers are looking northward, in search of the next hotspot for the best durum wheat. Some wine grape growers are preparing to move north as well.

The plant hardiness zones are based on overnight lows, which determine both the growing season for annuals and which trees can hang through the depths of winter. These constraints can be increasingly finagled with the help of a growing arsenal of clever tricks that farmers are coming up with to control the climate around their crops.

Such measures can help extend the season for greens deep into winter, or set up an early start next year, or allow risk-tolerant growers to take a chance on some exotic thing that shouldn’t have any business growing here. At the farmers market in Missoula, one can now get fresh ginger with his or her okra, artichokes and freshly roasted green chile (not necessarily a serving suggestion).

“Most of the country has moved up a zone from where they were in 1980,” McCamant says. “The best opportunities in agriculture right now are in marginal spaces,” he adds.

McCamant would know. When he was planting his Forbidden Fruit orchard, extension agents and agriculture academics told him that peaches were at best a marginal crop in Montana. Now, his many varieties, some of which are grapefruit-sized, have become a prized delicacy in the region. The lengthening summers and shrinking winters have generally been good to his orchard, in terms of quantity as well as quality. Bumper crops have become the new normal at Forbidden Fruit.

But these changes have a foreboding side too, thanks to the ever-increasing menace of an early bloom. And the general sense that one doesn’t know what to expect.

“It’s a double edged sword when you bloom early, because you still get those cold snaps. You increase the chance of frost damage,” McCamant says. “Weather in spring and fall is a lot more unstable these days,” he adds.

McCamant has a frost protection system that consists of a series of fans called “cold air drains,” and the occasional sprinkler –water forms a brief line of defense against frost. Last year McCamant spent more time running frost protection than sleeping. He operated it for 14 nights between April 1, when the peaches bloomed, and April 20, when they used to bloom.

But a March bloom would be tougher to manage for his system, which can only buy a few degrees. And a February bloom would mean he could take the summer off, unpaid.

“Februarys have been warming faster than just about any other month,” McCamant noted.

But while last year was stressful, this year the peaches were big and easy – that is if any aspect of farming could ever be called easy. McCamant only ran frost protection once, and that was more as an exercise than actual protection. “Having an early bloom once in a while is to be expected,” McCamant says. “But having two early blooms in a row, that’s a first.”

So while it seems clear that warmer days are coming, it’s less clear what to do about it. My yard is home to a Chicago fig that is rated for zone 5, my current hardiness zone, and a Russian Pomegranate that supposedly needs a zone 6 – the edge of which is a few miles to the west and approaching. At the rate we’re going, we might already be there.

In a vacuum, the prospect of homegrown mangoes is enticing.  But the latest data on climate change isn’t good. It seems to be happening faster than expected. And the faster it happens, the more violent it is.

Messing around with hobby plantings like this isn’t a substitute for getting out there and doing something about saving the planet. But if there was any lingering doubt that things are changing, watching the trees might set that aside.

And while some new plants will be growable, we can also expect others to die. Sugar maples, for example, are more vulnerable to disease during warm winters, which give many pests the upper hand. Pollination patterns are also changing.

With all of that in mind, it’s time to order trees. No more pomegranates and figs for me, at least until the first ones prove themselves. I will bundle them up this winter and assess their suitability next year. Some peach trees are in order – McCamant recommends Reliance – and I’m going to order a plum tree too, albeit with trepidation as it’s a cold weather tree.

Fall and spring are the two best windows for tree planting. Which of these seasons is better depends on which species is being considered. But keep in mind that some trees must be ordered in fall, even if they will be delivered and planted in spring. I know it can be a bit disorienting to be planning next year already, but that’s part of what being human is all about: obsessing over the future.

And maybe if we all obsessed a little more about planting trees, we wouldn’t be aiming for such a moving target of a growing season.