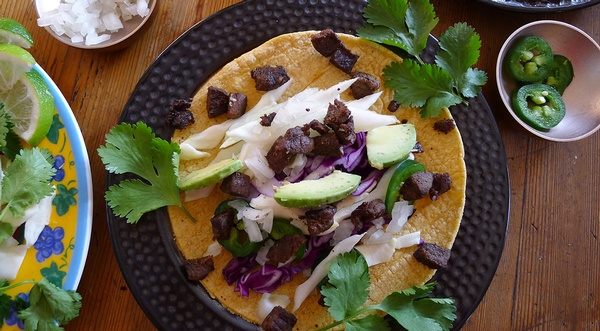 At a family gathering, my wife’s mom asked me to cook some meat from a deer that my father-in-law had shot. It was his first, and nobody seemed to know exactly what to do with it. The flesh resided in a cache of unlabeled Ziplocs in a chest freezer in the basement.
Chances are, every meat eater – even those without ties to hunting – has encountered a frozen hunk of mystery meat in the back of freezer. Nobody wants meat to spoil. The resources, carbon emissions and death behind that meat make it precious. At the same time, we don’t want to waste time and energy on a meal nobody will eat.
Meat can definitely spoil in the freezer if not properly processed and sealed, but there is nothing intrinsically wrong with long-frozen meat. In fact, the texture of meat can actually improve in the freezer, as tough chunks will soften with time.
The notion that meat can survive, much less thrive, in the freezer flies in the face of the belief that fresh meat is better. Wendy’s hamburger restaurants make a big deal of their burger meat being 100 percent fresh. But raw meat is rotting meat. If you really want to keep red meat fresh for more than a few days, freeze it.
When you freeze meat, wrap it tightly in plastic. You don’t want to leave any air pockets next to the meat, or they will fill with frost and cause freezer burn. If you don’t have a vacuum sealer, plastic wrap will cling very tightly to meat, and not provide space for frost to develop. If you then wrap the plastic wrapped meat in butcher paper, shiny-side in, the meat should stay in pristine shape for well over a year.
And that bright white butcher paper practically begs to be drawn on with a sharpie. My son likes to draw pictures of the animal inside, before it was meat. The cook, of course, prefers their meat labeled with all of the relevant information, like what kind of animal, which part, and when it was packed.
Luckily, for those times when we are cooking blind, we have the mystery meat techniques, time-tested ways of assessing and preparing meat of uncertain age and origin. They aren’t that complicated and will give you the confidence you need to go in there and solve the mystery of the next piece of random meat you encounter.
Mystery Meat Techniques
The first step is to thaw the meat slowly, still wrapped, to what’s called the “sherbet” stage, where the surface is soft but not thawed, and the inner core is still solid, but softening.
With a long, thin knife – a filet knife, ideally – trim the outside of the meat. Think of it like skinning an orange: you want the peel gone, but you don’t want to cut into the flesh beneath. In the case of mystery meat, as well as poorly sealed meat of known provenance, that “peel” is a greyish layer of oxidized flesh. Keep trimming until the surface of your meat is completely red, with no splotches of brown, grey or green. You may have to dig deeper near freezer-burned areas. As you slice, make note of the musculature that is revealed. Is it smooth, uninterrupted muscle flesh, or is it crisscrossed with connective tissue?
When the surface of the meat is clean, slice off a thin piece – less than a half inch –  and do some analysis in the pan. Heat some oil, add salt and pepper, and cook the piece of meat on both sides. While you’re at it, open a bottle of wine for proper enjoyment.
If, upon tasting this morsel you are like “WANT MOAR,” then you are good to go. If your mouth has reservations, then you might need to pay attention.
It’s possible for a piece of meat to taste good, but to also have off-flavors. And it’s easy to temporarily convince yourself that the good flavors outweigh the bad. You can mask flavor to a certain extent with spices, marinades and sauces, but ultimately a piece of mystery meat is not worth getting sick over. Trust your gut. If it doesn’t taste right in any way, don’t take the risk.
Truly bad meat is a lot more likely in the case of wild mystery meat. An outdoor hunt presents a whole new set of variables, like temperature, manner of death, and how the animal was processed into meat. On the other hand, meat that was processed in a USDA inspected facility doesn’t face those variables and should be fine, unless it spoiled at home before you froze it or something like that.
Assuming you have good meat beneath that oxidized peel, the pan test will also help you determine how chewable it is.
If it’s tender, cut the sherbet meat into little cubes, half-frozen meat is easy to cut. Cook the cubes in oil, with salt and pepper, and let them slowly build a crusty shell of brown armor.
You’ll want to just shovel these browned cubes into your mouth and wash them down with wine. Or make mystery-a-carnitas tacos, or mysterious fried rice.
If the meat is tough, then you will have to melt it, with an oven braise or in the slow cooker. Cook at 300 in water and wine, covered, until soft, which could take six to eight hours. With tough cuts that have been braised into submission, make stew or pulled meat sandwiches.