The spicy mortar of autumn 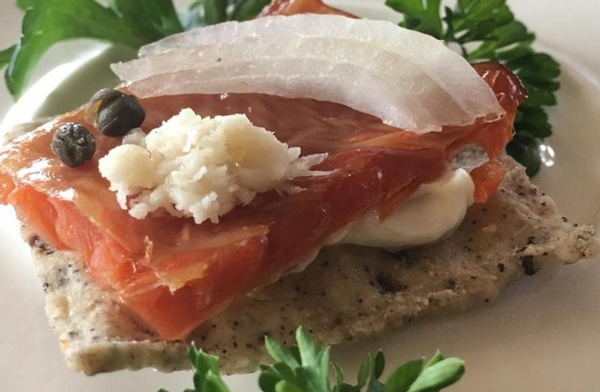 Last Saturday was opening day of hunting season in Montana, and my friends and neighbors were out in force. But while my fellow hunters hunkered down in the predawn drizzle, I stayed in bed. Later that morning, while they scanned distant hillsides through their spotting scopes, I could be found squinting behind my spectacles at a bright white elongated tuber.

My boots are oiled and my trusty .270 is sighted in, but I did not join the hunters, because opening day was also the second-to-last farmers market of the season. I had to get my horseradish together. Because what’s the point in bringing home the game if you don’t have the condiments with which to properly enjoy it?

Horseradish is a potent root, with a flavor that shines brightest when paired with similarly strong-willed, earthy foods, and ingredients that are rich and decadent. An amount of horseradish that would be too spicy to swallow from a spoon is rendered completely palatable when served with an accommodating partner. This puts horseradish at home on most fall menus, where it can be found adjusting the flavors of pickled beets, roasted Brussels sprouts, mashed potatoes and wild mushrooms, as well as lustier, more carnivorous dishes like smoked salmon bellies, prime rib or most any kind of raw flesh. Ask the Japanese, whose wasabi is a form of horseradish.

Most of these varied applications boil down to simple preparation of grated, salted horseradish soaked in vinegar.

After a moment scrutinizing those roots, I determined they would do quite nicely. Freshly dug by Alisa the quail egg lady, they were evenly formed with no rotten spots and about 2 inches wide.

Two inches is well beyond the official 11⁄4 inch cutoff, in terms of girth, that is necessary for a piece of horseradish to qualify as “U.S. Fancy.” Any narrower, and the root’s status drops to a mere “U.S. No. 1.” According to USDA’s Horseradish Root Grades and Standards, a certified “Fancy” piece of horseradish must be, “... firm, well trimmed, well shaped, fairly smooth, free from decay and hollow heart, and free from damage caused by dirt, sunburn, cuts, cracks, internal discoloration, mold, freezing, insects, mechanical or other means,”

I’ll admit, I was initially surprised that our tax dollars are being spent on such hair-splitting distinctions. But having worked with horseradish, it’s clear that Fancy roots would be easier to peel and would yield a higher percentage of usable flesh than the lower grades.

Meanwhile, a team of researchers at the University of Illinois recently added a new twist to the horseradish grading curve: U.S. Fancy horseradish was found to be higher in allyl isothiocyanate, a powerful anticancer com- pound, than lower grades of horseradish. Allyl isothiocyanate is a type of glucosinolate, the type of anti-cancer compounds famously found in broccoli. Horseradish generally contains about 10 times the glucosinolate of broccoli, but this study confirms that Fancy horseradish has it in the highest concentration. The spicy root has also been widely used through the ages to treat congestion, low energy, inflammation, infections and other ailments.

I brought home my certifiable U.S. Fancy horseradish and grated it up. By mistake, I used the coarser setting on my hand grater (a typical deal with four sides, two for zesting and two for grating) for the first batch. I realized my error and on my next batch grated it on the finest setting.

Grating horseradish produces an effect similar to what one might get from swimming in a vat of horseradish juice with eyes wide open, while attempting to nose breathe. It targets the same part of the head-brain as an ice cream headache.

Per Alisa’s advice, I salted a cup’s worth of finely grated horseradish with 11⁄2 teaspoons Kosher salt, and then a half-cup of white wine vinegar. I packed it into mason jars and put in the fridge.

Then I set about making a fermented version, following Sandor Katz’s recipe in his classic book Wild Fermentation. Grate the horseradish, but instead of adding salt and vinegar, just add some water sweetened with honey or sugar. Stir it up, cover with some cheesecloth, and wait. Over the course of weeks, the sugar in the water and horseradish will ferment to alcohol, and eventually be- come vinegar. As it is unsalted, you will have to account for that at serving time. Alisa had said that I could start eating the salted, vinegared horseradish in about a week. I started digging into it pretty soon as I had planted my leftover pieces of horseradish root into the front yard. It’s one of the few plants the deer will leave alone.

The instant horseradish was nothing short of spectacular. I began searching the fridge for things I could prepare with horseradish. Food became a vehicle, and then an excuse for eating that spicy, tangy condiment. Grilled backstrap with horseradish, stewed shank with a dollop of horseradish sour cream.

I developed a condiment I call the Four Hots, in which horseradish was mixed with garlic, black pepper and Arthur Wayne Mango Habanero sauce, and mixed with mayo. I’m used to the phenomena of intense flavors exploding in my mouth, evolving their way into new patterns on my taste sensors. But the flavor of Four Hots seemed to evolve in circles, spiraling upward like a plane gaining altitude. Nonetheless, in a side-by-side, I prefer plain horse- radish, Alisa style.

There was no comparison between the finely grated stuff and the coarser batch I made by mistake. But as the days went by, I found a use for the coarser stuff. I squeezed a clear fluid from the gratings that was essentially horseradish infused vinegar, and added it to melted butter. Slices of Rose Finn fingerling potatoes and onions absorbed the horseradish beautifully. But the coolest was when I fried some shaggy parasol mushrooms, aka Chlorophyllum rhacodes, in the horseradish butter.

These mushrooms have been all over my neighbor- hood this year. Considered a choice edible, they are usu- ally a bit too strong for me. But when cooked in the horseradish butter they were absolutely spectacular, and I began lamenting all the ones I’d seen and not picked. Never again. Those whitetails are no longer the only carbon-based life forms that need to watch their backs when I’ve got my horseradish together.