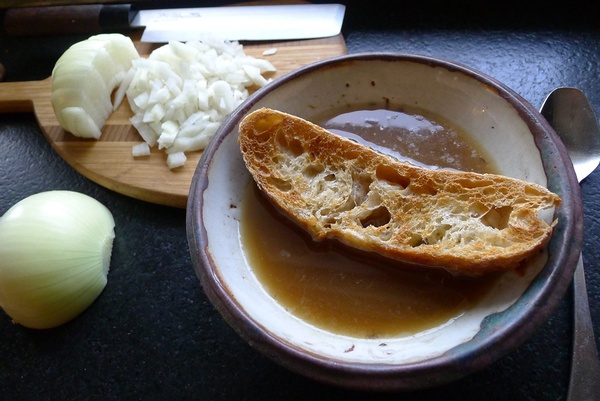 “Put chile and some water into a saucepan with bullion, garlic which is diced, and salt and pepper and onion which I don’t have and won’t mention anymore because I miss it, and you shouldn’t ever be anyplace without it, I don’t care where.”

– Simon Ortiz, “How to Cook a Good Chili”

I made it surprisingly far through life without thinking deeply about onions. It took an acid trip in college, during which I watched my friend Wayne fry an onion that had been cut in half. We stood transfixed as it slowly melted in the pan. I could feel it was a profound moment, but it would be years before I understood the onion’s many layers of flavor, and its fundamental importance to cooking.

A decade later, when I read the Simon Ortiz poem (quoted above), it resonated because I knew he was right, that you shouldn’t ever be any place without onion. But I still didn’t know how to cut an onion. I could hack one, with too many strokes, into large, awkward pieces, but I had no system.

I finally learned how to cut an onion from an old chef friend, when I was helping him cater an event and he was bossing me around. He told me to cut the onions just so. In the days and weeks that followed, I realized that this is the only decent way to cut an onion.

Cut the ends off the onion, peel it, and slice in half from tip to tip. Lay the flat sides down and make a series of thin parallel slices, about 1⁄4 inch apart, along the tip-to-tip axis. Each thin slice is fragile, ready to fracture into concentric arcs with a mere tousle. If you need them minced, it’s just one more step. After making those parallel slices in the onion halves, hold the pieces together with one hand, turn the held-together half 90 degrees, and cut 1⁄4-inch slices perpendicular to the previous ones. The onion will fall apart like confetti.

The power of an onion is compounded by its dual personality. While a well-cooked onion gives its flavor selflessly, bringing harmony do a dish, raw onion is about contrast. Its presence is more of a fiery assault by an army of white light sabers.

Sometimes I find myself running to the cutting board, mid-chew on a delicious mouthful of food, where there is always an onion in some state of disrepair – hopefully a juicy salad onion. I’ll chew a piece into my mouthful to enjoy the raw onion’s sharp, sweet and crunchy flavors.

When cooking for my older son, who purports to hate onions, mincing is mandatory so they disappear completely into the dish. His little brother, who is the chef in the family, acknowledges the value of an onion “cooked for a very long time.” Generations of French onion soup makers agree.

Legend has it, French onion soup was invented in a hunting cabin, by the king of course, when he discovered the cupboard bare of everything but onions and bread. If that wasn’t really what happened, it could have been. Nobody should be surprised when an onion carries the day. Especially an onion cooked for a very long time.

Recently, in the kitchen of the old chef who taught me how to cut an onion, I watched him prepare an eggplant and tomato recipe into which onions would disappear. Forgotten but not gone, those onions would hold together the flavor with an unseen force more likely to be missed than appreciated.

I asked the chef: “If you were stranded on a desert island, and could only have one vegetable ... ?”

“I would take the onion,” he said gravely, before I could finish.

Although the active time is brief, French onion soup takes time to prepare. It’s perfect for a cold winter day, when the process can heat the entire house.

French onion soup is traditionally served au gratin, which means “with a browned crust.” Many cooks add cheese to the gratin, which confuses the issue if you ask me, as there is already so much butter. Whether you toast the bread under the broiler as directed here or dip your untoasted bread as my kids do, bread just goes with this dish. I prefer a white, crusty sourdough.

Traditionally it’s made with beef stock, but chicken and veggie work as well, as do mushroom and clam stocks. Onions play well with everyone. And when it’s done, you have an onion stock that will be useful as a soup base for other dishes, to deglaze a pan, and anything else you would do with a dark, sweet stock full of earthy flavors.

Serves 6 and can easily scale up
2 pounds peeled yellow onions, ends removed and sliced from tip-to-tip
1 stick butter
1 bottle white wine
2 bay leaves
1 gallon stock of your choice
1 tablespoon thyme or herbs de Provence
A crusty white sourdough
Minced onion, as a garnish
Bake the onions at 300 on a cookie sheet, flat side down in butter, “for a very long period of time,” as my young chef will sometimes say.

Add a half-cup of wine every hour. When the onions begin to melt, use a spatula or wooden spoon to press down and smear apart the layers. After about three hours, when they are deliciously sweet and browned but not burned, transfer the onions and all pan juices to a pot of stock. Add bay leaves and herbs and the rest of the wine and simmer for about three more hours, seasoning with salt and pepper as it cooks.

At serving time, heat the onion broth under the broiler in personal-sized bowls. Slice the baguette, butter the slices, and set aside. When the soup is hot, add the bread, buttered sides up, and broil until they are toasted. Garnish with raw onion