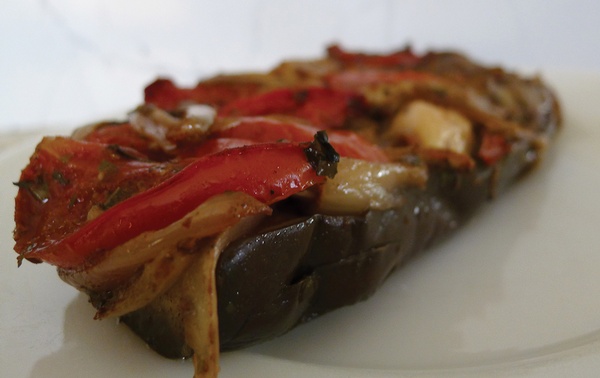 The Turkish eggplant dish Imam Bayildi is named for its ability to separate a man from his consciousness. Literally, it means “the Imam fainted,” supposedly after taking a bite. Presumably, he fainted because of the dish’s flavor, but there is a competing theory that he fainted upon learning how much olive oil his wife used in preparing it.

Eggplants share the genus solanum with tomatoes and potatoes. Peppers are one branch over in the nightshade family tree. With a few niche exceptions, like the ground cherry, most other nightshades are poisonous, hallucinogenic, medicinal, inflammatory or any combination of the above, depending on the dosage. This toxicity is thanks to alkaloids, a type of molecule that’s diversely represented in the nightshade family. The alkaloid nicotine is found in potatoes, tomatoes and eggplant, but in much lower concentrations than in their nightshade cousin tobacco.

With one notable exception, every important nightshade comes from the Americas. That exception is the enigmatic eggplant, which was domesticated in Asia.

My friend Ray Risho, a Syrian-American chef, restaurateur and lifelong scholar of Old World cuisines, grew up in an eggplant-friendly household in 1950s Providence, RI. To this day, during the peak eggplant months of late summer and early fall, Risho goes on a seasonal binge, buying and cooking eggplant in various ancient, succulent, fragrant ways. And recently, he showed me how to make Imam Bayildi.

Risho’s rendition is exotic enough to drop you like a kick to the liver but considerably more enjoyable, thanks largely to the Baharat seasonings he mixes with the tomato and onions.

Baharat is a classic spice blend that can be found in most Middle Eastern stores. Risho, a black belt in spice blending, mixes his own. If you are purchasing Baharat or any spice mix, he advises, read the ingredient label carefully. You only want the spices, no flour, salt, sugar, oil or any other filler that would dilute the impact. You can add salt later.

Risho lays eggplant halves in a cast iron skillet, blankets them with a Baharat-seasoned onion and tomato  mix, and bakes the skillet, covered, until its contents are a savory pudding.

“The idea is to get the onions, tomatoes and eggplant to melt,” Risho said. Like the imam, we presume.

I watched him prepare a pan. As he put it in the oven, I took my leave and went home to prepare my own. When it was done, and the kitchen filled with Baharat aerosols, I could not wait for it to cool to a reasonable temperature. Risking heat damage to my mouth, and  with dainty nibbles that grew larger as the pan cooled, I dove in.

The Baharat spices are magical in this dish, pulling it together into a tightly woven yet luxuriously soft magic carpet ride of a meal. If I had passed out and woken up on the floor, it wouldn’t have surprised me in the least. The only surprise would have been if I’d stopped chewing.

Imam Bayildi is hardly the only dish this mix will spice up. It’s used in dishes throughout the Mediterranean and the Arabian Peninsula.

Since learning the dish from Risho, I tweaked it, adding garlic and lemon, both of which appear in other renditions of Iman Bayildi.

Serves 6
2 lbs eggplant, trimmed and sliced in half lengthwise
1 lb tomatoes cut into ribs (see below)
1  lb onion cut into half ribs
2  tablespoons Baharat (recipe below)
1 cup extra virgin olive oil
3 teaspoons salt
1 tablespoon tamarind paste
1 tablespoon dried mint
1 head garlic, chopped coarsely
1⁄4 cup lemon juice
Slice off a thin piece of skin on the underside of each eggplant half so it sits flat. Fill a cast-iron pan or other baking dish with eggplant halves, trimming as necessary so they fit in the pan as snuggly as possible with no empty spaces. If there are lots of gaps, cut up eggplant pieces to fit. With a sharply pointed knife, score a crosshatch pattern into the up-facing sides of the eggplants, about a quarter-inch deep, so the cut halves look like they have been overlaid with graph paper.

To make onion ribs, cut an unpeeled onion in half from end to end, and lay one of the halves flat-side down. Slice off both ends, slip off the skin, and slice thinly along the axis between the two trimmed ends. Finally, make one slice across the middle, 90 degrees from the others, so all the ribs get cut in half. Cut the tomatoes to ribs, but don’t cut them in half.

Combine the tomatoes and onions. Add the salt, olive oil, Baharat powder, lemon juice, garlic, mint and tamarind syrup, and stir it into a caramel-hued mix. Spread this mix evenly atop the eggplant. Bake covered at 350 for two hours. It should be succulent and soft but not collapsed and mushy.