Time to get pickled 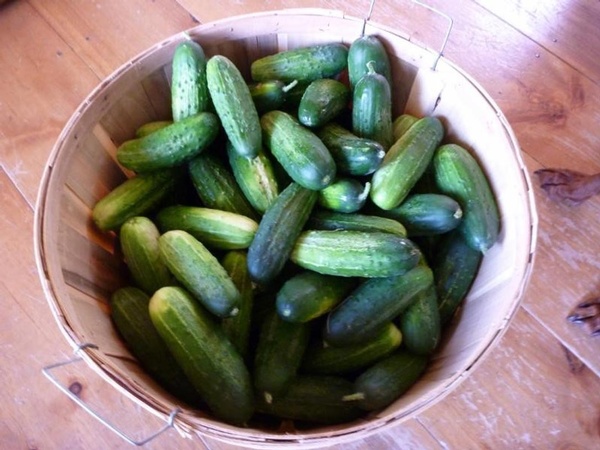 Spring is the time for planting. Autumn is when we put things in jars. So goes the conventional wisdom, anyway, among enthusiasts of the garden lifestyle. But the reality is, one can surely plant after the summer solstice has passed, and pecks of pickles can be packed before the equinox.

A stealth window exists after solstice, when a fall garden can be planted. The days are getting shorter now (sniff) but the good news is that the havoc that lengthening days can wreak on plants will finally end. Now, as summer heats up, you can plant seeds, counterintuitively, for cool weather crops like radishes, spinach, lettuce, radicchio and other greens. Summer will be gone in the blink of an eye, leaving these plants robust and ready to cruise into winter – possibly with the aid of garden blankets and hoop houses and other forms of wintergreen shelter.

If you already planted your entire garden and didn’t allot space for a winter patch, you can almost always squeeze a few plants in the gaps, keeping in mind how future growth and harvest of other crops might create or close opportunities.

Plant your seeds in wet soil, and keep them wet in the days that follow, as they sprout into little plants. Careful: if you forget to water even for a day in the summertime heat, they could fry.

And while the time for planting has not yet passed, the time to harvest and preserve is already upon us, if you’re so inclined. Fall, according to conventional wisdom, may be the time for marathon canning sessions, for steaming kettles and a kitchen buried with harvest. But once you’ve got a few of those marches under your belt, you’ll appreciate the concept of pacing oneself through the growing season. A few here and a few there, whenever the opportunities present themselves, will leave you in good shape by summer’s end.

My garden, bless its heart, lends itself to small batches. It is not the world’s most productive piece of ground, but it tries hard. Most of what it does produce is quickly gobbled up, and hardly any gets put up. What does comes from off-site, usually the farmers market. It’s the rhythms of the market that determine whether I’m making salsa, ratatouille, peach jam, or bread and butter pickles.

These days are good for cucumber pickle making, because they are really coming on strong. At my market, the Russians cucumber growers are hauling big loads of little picklers, and they are ready to move them along at a decent price for a bulk deal.

Now, when it’s early in the canning season, you have an opportunity to figure out how you prefer your pickles. Do you want Russian style (dill, horseradish leaf), or perhaps sour, which is fermented rather than pickled with acid.

One of the easiest ways to get started on the pickle path is with a simple batch of fridge pickles, which are little more than cucumbers, vinegar, sugar, salt and perhaps dill or other herbs. As they aren’t sealed in jars or processed with heat, fridge pickles are crispier than normal pickles, and are thus a treat of summer.

The easiest way to make fridge pickles is to eat the pickles from a jar, and replace them with fresh cucumbers, whole or sliced depending on their size.

When you’re ready for something a bit more advanced, consider the recipe that was the context for my first stab at pickles: bread and butter pickles from Stocking Up (Rodale), a book that has long been a go-to manual for ideas on putting up anything that grows (plus recipes for head cheese and whatnot). A jar of bread and butter pickles, once opened, will be empty in very short order, because everybody loves them and wants to eat them and put them on their sandwiches. Jars of B&B pickles, to the home economist, are like jars of bitcoins to a technologist. And you can’t eat a bitcoin, I don’t think, so there’s that.

30 medium cucumbers
10 medium onions
4 tablespoons salt
(Slice the cucumbers and onions, sprinkle with salt, and let sit for an hour. Then drain)

Meanwhile, make a spiced vinegar with the following: