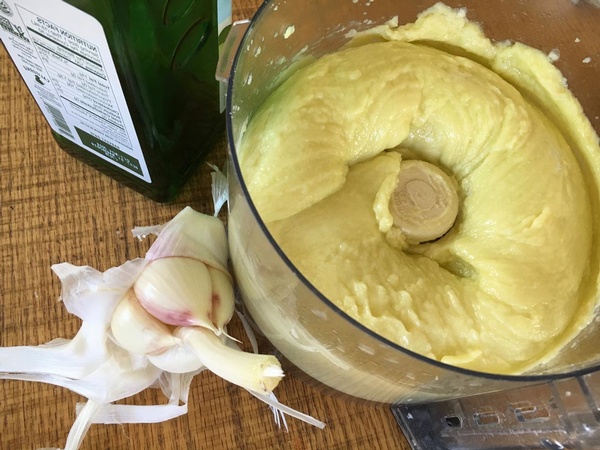 Garlic season is upon us, which means that last year’s garlic will be on sale alongside the new crop. Don’t be fooled by a sale price; you want only the good stuff, which generally isn’t available in supermarkets, as their suppliers are sitting on this year’s crop and trying to get rid of the rest of last years.’ Squeeze each head you buy. It should feel like a lumpy swollen golf ball. If there is any squish to it, you can look forward to a green sprout inside each clove.

I always get excited this time of year, when the cloves peel with an extra soft eagerness and the flesh is at its juiciest. Cooked, in whole clove or slices, new garlic turn translucent; pearly white earthy scallops in your pan. I didn’t think I could love garlic any more, and then I discovered a special garlic sauce, toum, which took my garlic appreciation to a new level. It also helped fill in some blanks in my understanding of another favorite subject of mine: mayonnaise.

It was like a scene from an anthropological thriller, like “Indiana Jones” or the “Davinci Code,” where some missing link is discovered in a crowded market. But instead of a dusty notebook or bag of seeds, I found a plastic container full of what looked like mayo in a refrigerated section of a Lebanese-owned Armenian market named Arax, in Watertown, Mass. The label said “Garlic Sauce.” Three ingredients were listed: garlic, olive oil and salt.

I recognized them immediately from a long-lost text, Catalan Cuisine by Coleman Andrews, which makes the best case for the origins of mayonnaise that I’ve seen, and I’ve considered them all. Andrews suggests it evolved from the Catalan sauce aioli, which in turn sprung from a precursor known as allioli, made with olive oil and garlic, skillfully emulsified in a mortar and pestle. (Later, presumably, when they figured out that egg yolk was a much better emulsifier than garlic, mayo was born.) So while I’ve long known about the supposed existence of allioli, I had never seen it, and never known for sure if it was a myth, because it sure didn’t sound physically possible. But there I was, potentially holding actual evidence of garlic and olive oil emulsion.

I brought the garlic sauce back to the lab, where it performed like a cross between mayonnaise and custard, and tasted like garlic. I’d say it performed like yogurt and tasted like garlic, but when I mixed it with some thick Kefir (basically yogurt) it became something else entirely, something that, tossed with cucumbers and mint, or dolloped into a bowl of soup, was really good.

The shopkeeper told me it was called toum, which I later learned is a word that can be used interchangeably in Arabic to mean both garlic and that most epic and special cre?me I had just tasted. And, as can happen with other condiments – for some people it’s hot sauce – the condiment itself becomes the reason to eat the food, rather than that which it’s ostensibly there to flavor.

For me, that is mayo, which an emulsion, a mixture of oil and lemon juice (or vinegar) that won’t easily separate. This stable bond is brokered by yolk, which is a powerful emulsifier. Toum is an emulsion as well, but is brokered by garlic rather than yolk.

It turns out, I’m not the only one who has discovered toum, with myriad YouTube videos of this divine sauce emerging from well-worn food processors. The interwebs are full of ways to serve it, marinade with it and otherwise consume it. As with mayo, once you’ve got your toum on, anything is possible.

Some people, I learned at another store down the

street, add potatoes, and the interwebs are thick with toum thickeners like flour, corn or potato starch. These are of no interest to me, as thickened toum is the analog to Miracle Whip, another starch-thickened sauce that isn’t an emulsion.

So here, at long last, is something new to do with garlic. Fresh garlic, not sprouted garlic. It is a toum recipe that will get you to the point of emulsion, if you are patient, and then it’s on you not to take it too far.

and other such refined, odorless, arguably nasty oils are popular among many New World toum formulations, and many avoid olive oil for its color and flavor. Not me, even though my toum isn’t as bright white as it could be.

Make sure all utensils are dry, and don’t let any water touch any of the ingredients.

Add salt and garlic to a dry food processor and pulse four times, about five seconds per pulse. Scrape down the garlic with a spatula. Run the food processor again until it’s all stuck on the side, and scrape it down one last time.

Now, turn the processor to on and leave it there.

It will get progressively fluffy, until the processor is nearly full of this fabulous substance.

Transfer to a container and let it cool in the fridge, uncovered, or covered with a paper towel (to avoid condensation dripping down into the toum, which would cause it to separate).

To clean the food processor, add some vinegar or lemon juice, and a bit of oil, and a dash of soy sauce, and pour out a nice garlic vinaigrette.

After the toum is cool, cover it, and let it sit overnight in the fridge before using. It will last a month or longer in the fridge. Or it might not last a day.