Turnip-ing salad on its head 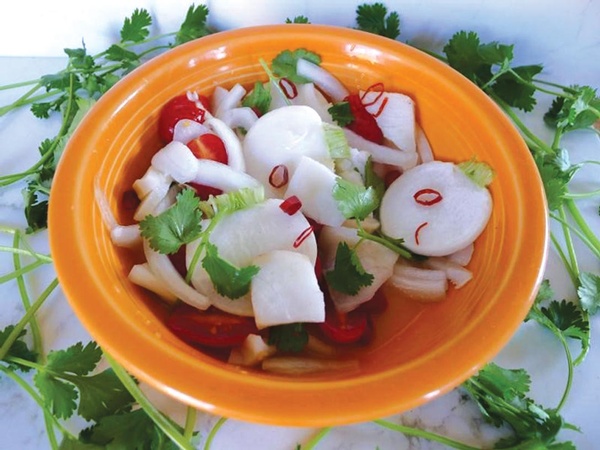 The words “salad” and “turnip” rarely appear in the same sentence, much less the same room at the same time. That dense, pungent root, which must be cooked to be rendered edible, is a winter storage crop, the one you eat when all the potatoes and carrots are gone from the root cellar. A salad of mild leafy greens is the antithesis, in terms of flavor, season and plant parts, from the spicy white roots known as turnips. But a “salad turnip” does exist, and it is so sweet, tender and crispy that it contradicts the notion that a salad turnip is a contradiction.

Most shoppers have never had the opportunity to buy this subterranean unicorn, even after it’s been harvested. Unless you shop at the farmers market, have a CSA membership, eat at locavore restaurants or are otherwise
connected to the small farm scene, you’ll not cross paths with the hakurei turnip, as the Japanese variety is called.

It’s pronounced “Hacker Eye,” which is appropriate, because once I brought my first bunch home and began the most cursory of explorations, I was hooked. Next time I hit market I had my Hakurei Eyes on, and I saw those overgrown pearls wherever I looked.

Also known as the Tokyo Turnip, the hakurei has yet to debut in supermarkets, at least according to my well-placed sources in all of the important places. But in the farmy trenches, word has travelled quickly along the farmer-to-farmer information superhighway. Their deliciousness, versatility, beauty, cold tolerance, quick life cycle and other favorable growth traits reward all who seek them out.

Hakurei translates to “esteemed companion,” a name that, like “salad turnip,” is entirely appropriate. The entire plant is edible, from green tip to root tip. You can do anything you want to a hakurei, including nothing. Raw and unpeeled, with just the spindly root part cut off, it’s ready to go. Just bite into it like a piece of ripe fruit. Sweet and juicy, yet crisp, hakurei is like jicama, but less starchy, and like kohlrabi, but without the armor.

The seeds can be planted all summer long, and into the fall. Last year about this time, all of the seed was out of stock thanks to a crop failure from the farm that supplies seed to Johnny’s Seeds, in Fairfield, Maine. Johnny’s was the earliest adopter, among seed companies, of hakurei on this side of the big pond, and remains the biggest retailer of the seed.

This was explained to me by Sam(antha) Burns, who answered the phone at Johnny’s. A farmer herself, Burns is a grower of hakurei. (Or at least, she was and will be; this year her farm, Runamuk Acres, is in transit from

rented land to new digs in New Portland, ME.) She said that many vendors, including herself, sell hakurei at the Madison farmers market, and are a major hit with the locals. But, she confirmed, they haven’t made the jump to retail stores.

I get a seafood feeling from hakurei. Maybe it’s because they look like diver scallops, or because they are delicious saute?ed in garlic butter with a squeeze of lemon. I asked Burns if she knew of any good seafood recipes with hakurei. “I can’t afford to eat seafood,” she said matter of factly. “I’ve been saving up for this farm.”

It may not be fresh from Maine, but oyster and fish sauce can be thrifty alternative. Hakurei sauteed in oil with garlic, soy sauce, and either sauce makes a great dish.

Like fish, hakurei also does well in acid. Sliced and submerged in lime or vinegar, you’ll have pickled hakurei within the hour. The slices will keep pickling in your fridge for as long as you can refrain from eating them. Which brings us to the recipe for hakurei ceviche, a juicy, crunchy and filling summertime dish.

Bonafide ocean creatures can be omitted, as hakurei can hold its own as the main event. If you do use seafood, white flesh like Pacific cod, halibut, scallops, tilapia or wall-eye works well. All fish used in ceviche must be frozen to -4F for seven days in order to kill any of the parasites it may harbor. Allow it to thaw to a point where the fish is soft enough to cut, but still hard enough that it won’t squish down when you push the knife through.

Citrus, by contrast, is nonnegotiable. I like a mix of lemon, lime and grapefruit. Squeeze the juice into a bowl and screen out the seeds. You want a cup and a half of citrus juice per pound of fish. Combine the citrus and fish slices. They should be completely submerged. Marinate for at least 30 minutes in the fridge.

Meanwhile, for that pound of sliced fish, add:

• Half a medium onion, sliced thinly end to end
• 3-6 trimmed hakurei depending on their size and

red chile peppers, fish sauce
Add the onion, hakurei and any of the extras to the fish. Toss, and season with salt and pepper to taste. Garnish with chopped parsley or cilantro.

This is a recipe built on layers of redundancy. Multiple acids, including three kinds of citrus and tomato. Both fish and fish sauce. And two kinds of juicy white root, both of which have sweet and spicy notes. The hakurei, having been added and stirred in right before serving, maintains a crisp that distinguishes it from the other white ingredients swimming in the bowl.

This is a refreshing, satisfying dish that will make you sweat as much as you dare add chili. Served on greens, perhaps mortared together with mayo—the other other white meat – it will fill you up as it washes down the greens.

As for the hakurei greens, I prefer them cooked. I use them in fried rice, saag paneer, collards, and the like. Sauteed in bacon, butter, or olive oil, with garlic and perhaps some other fresh veggies, the hakurei greens disappear about as fast as the roots.