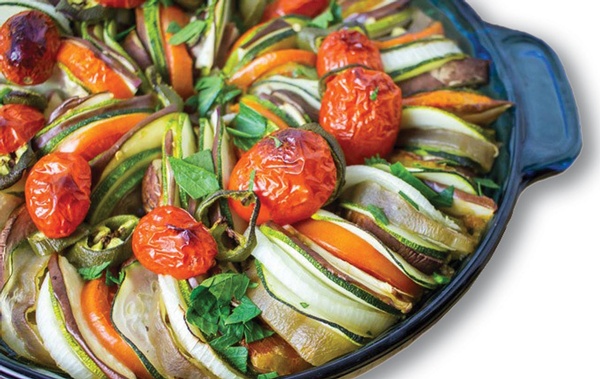 Welcome to peak food season, when the diversity of produce from the garden or farmers market is at its greatest. With just a few exceptions, all of the summer produce is still available, while the fall bounty is kicking in. The fridge is full of fresh veggies and possibilities, and the kitchen is never clean. It’s a glorious time, but it can be an overwhelming time too, as you ponder how to use all the stuff that seemed like such a good idea to purchase.

Peak food can be an especially busy time for those who choose to spend their entertainment dollars on canning and freezing fresh produce for year-round use. After spending a day in the kitchen filling the pantry with jars, you don’t necessarily want to cook up a five-course feast, despite having the ingredients to do so.

For guidance on how to make dinner, I often look to the farmers themselves. They know produce better than anyone, and the dishes they cook at home, when time is short and hungry mouths await, have numerous virtues that we all can appreciate. These meals tend to focus on the produce itself, and on how to bring out the best qualities in each variety. Farmer cooks rarely try to impress anyone by tap dancing through a series of fancy maneuvers. Farmer dishes are generally simple affairs that don’t require a massive cleanup. They rely on the basic premise that if you use good-quality ingredients, you don’t need a culinary degree to cook good food.

So in honor of peak food, I asked a few local farmers what some of their favorite dishes are at this time of year.

Pattie Fialcowitz, of Fialky Farm in Dixon, Mont., shares her recipe for a stovetop ratatouille she makes this time of year. A simple mix of tomatoes, eggplant and summer squash, ratatouille is the kind of bucolic dish that put French cuisine on the map. But unlike a lot of French country dishes that went uptown, ratatouille never changed. I don’t think it’s even possible to make a fancy ratatouille, as attempting to do so would change it into something else. Earthy to the core, ratatouille is the embodiment of terroir. It’s a simple, elegant combination of garden ingredients that’s easy to prepare, hard to screw up and will win over the most ruthless critic – as seen in the 2007 movie by the same name.

“Sauté a cup of onion in some butter, add the garlic, then eggplant and zucchini. Add a cup of water and a cup of broth. Add tomatoes, and simmer gently so it doesn’t turn to mush. Season with salt and pepper, and add chopped fresh basil or parsley right before serving.”

Any leftovers can be drained of any excess liquid and frozen in jars or freezer bags, so you can enjoy peasant food all year long.

Every Friday evening, Josh Slotnick of Clark Fork Organics jumps off his tractor and heads to the kitchen, where he cranks out a spread for the hungry crew to devour when they are done harvesting for the Saturday market. One of his favorite dishes this time of year is the Middle Eastern dip baba ganoush. It’s easy to prepare and can be used to coat any number of fresh vegetables, including cucumbers, broccoli, carrots and pretty much any other vegetable that can be eaten raw.

Slice the eggplant into rounds of consistent thickness – between ¼- and ½-inch – sprinkle with salt, and set in a colander for 10 minutes to drain the moisture the salt pulls out. Drizzle with olive oil and broil on a baking sheet until browned on both sides and mushy in the middle. Allow to cool, pull off the skins, and whizz the eggplant pulp in a food processor with tahini, garlic, lemon juice and olive oil, all to taste.

Luci Brieger, of Lifeline Farms, is the earthly embodiment of no-nonsense cookery. Her Big Pot Pasta dish is a family favorite. Everything about it is big.

“Fill the biggest bowl you have with sliced zucchini, sliced tomatoes and chopped garlic. Toss with salt and olive oil. Paste tomatoes are better because they don’t have too much water – that’s why I only grow paste tomatoes. If you only have juicy heirloom or slicing tomatoes, use fewer of those and more zucchini.

“Find the biggest covered baking dish you can. I use a square enamel turkey roasting pan because it’s the biggest thing I can fit in my oven. In that container I can make enough to feed 15 people but I cap it at 12 so we can have leftovers.

“Start with a layer of tomato/zucchini/garlic in the bottom of the pan. Then add two to three layers of uncooked lasagna noodles, then another layer of zucchini and tomatoes, followed by a layer of ‘motz’ (mozzarella cheese, for the uninitiated). Then repeat, building the dish layer-by-layer. When it’s full, I press down on it with all of my body weight and squeeze in another layer or two.

“Finish with a fair bit of cheese on top. You can add Parmesan too. My kids covet this top layer. They call it ‘Cheesy Topness.’

“I’ve tried adding basil and oregano, but they don’t want any of that jibber jabber in there.”

Bake at 350 for two to three hours, covered. If it’s too watery, remove the cover halfway through so the noodles don’t get soggy.

“Next time,” she promised, “I’ll tell you how to make my inside out superfast stuffed zucchini with sage.”

With that, Luci took her leave. She and the crew had 750 pounds of kale to pick that day, plus they had to get the squash out of the field ahead of an early frost.

“In my next life,” she said in parting, “I’m going to move to Brooklyn and open a restaurant called Glop. We will only serve farm food. My son Fisher (who lives in Brooklyn) says the place will be packed.”