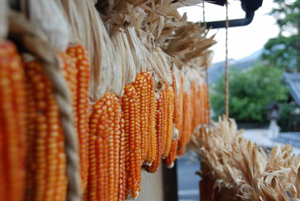 Siting into a juicy ear of sweet corn is a highlight of summer. But, like a summer romance and things that happen in Las Vegas, it’s fleeting. And you can’t take it with you when the vacation ends. But thanks to an Anasazi trick, you can enjoy your corn all year long, in a fresh-ish sort of way.

You’ve heard of tortillas and tamales, and perhaps even corn syrup. But in terms of non-fresh uses of corn, these foods are just the tip of the corndog. Prepared via an ancient technique, chicos are still made by residents of the Upper Rio Grande, but they could, and should, be made by you, too.

Corn has a dual nature. There is corn the commodity, aka big corn, grown with all sorts of infamous, large-scale farming practices. It’s the corn that fills Midwestern silos, is sold by the bushel and fed to animals, or turned into sugar syrup or ethanol.

And there is little corn, aka the original soul food of America. Bred into existence in what is presently known as Central Mexico, maiz, as its creators called it, became the lifeblood of native tribes throughout North and Central America and played a pivotal role in the Pilgrims surviving in the new world.

Whichever paradigm it was grown under, corn will produce more calories per acre than any other food but the potato. In its ancestral Southwestern homeland, corn remains the heart of the regional cuisine, embracing vegetables and meat in tortillas and encasing it in tamales made of ground corn from the previous summer’s crop. Most dietary corn comes in the form of ground corn, but there are also a few forms of corn that are preserved and prepared intact. The most well-known of these is posole (or the Mayan-style pozole), which refers to large kernels of corn that have been treated with lye or wood ash to remove the skins and soften what remains. The swollen posole kernels are used to make a stew of the same name.

Posole’s less famous little brother goes by the name chicos, Spanish for “little ones,” or more colloquially, “pals.” These are the dried kernels of sweet corn that has been roasted all night in a Pueblo-style horno mud oven and then sundried and stripped from their cobs. They are thought to be an Anasazi invention, as chicos-like remains have been found in Chaco Canyon, Mesa Verde and other strongholds of the Ancestral Puebloan Indians. Today, dried corn has gone global (as has corn itself, obviously). But depending on how dried corn is prepared, it may or may not be chicos. Real chicos will melt when added to food, while typical dried corn will taste like rocks.

Chicos are more than a historical staple food. They are a regional treasure, the darlings of farmers markets from Santa Fe to Durango. They hold up in dry storage through the winter and are an indispensable ingredient in some of the most treasured Southwestern comfort foods. Despite this niche, chicos can be easily prepared at home from any sweet corn you can get your hands on.

Pound for pound, a few pieces of corn can pack an impressive punch. A handful of kernels tossed into soup converts it to corn soup, thanks to a powerful, umami-rich flavor. Add potatoes, and you’ve got corn chowder.

Chicos rehydrate quickly and then can be tossed into soups and stews with the spontaneity typically reserved for fresh corn. In winter, those sweet, smoky kernels are like packaged drops of sunshine.

Today, we refer to the corn belt as a lateral figment of the Midwest, but the original corn belt extended south-to-north, from the Mexican crucible to a northern extreme at the headwaters of the Rio Grande in Southern Colorado. This northern edge of ancestral corn country is the 120-mile long San Luis Valley. This is hardly typical corn country, and the varieties that grow there are short season varieties, able to withstand large swings in temperature between day and night.

One of these short season varieties, a white corn called Maiz del Concho, is most commonly used to make chicos in Northern New Mexico and Southern Colorado. However, I know from experience, that any cob can be made into chicos. And if you have multiple varieties, all the better. A diversity will increase the flavor and fun to be had in the kitchen.

An horno oven isn’t necessary either. The corn can be roasted in a regular oven, or better yet, a pit in the ground, where the ears are buried with juniper and piñon embers. The ears should be soaked first, though.

If you aren’t going with the pit technique, and you don’t have an horno, then 300 degrees in a normal oven will suffice. Place the corn unpeeled in a covered baking pan or wrapped in foil. Bake it for 3 to 4 hours, checking occasionally to make sure it doesn’t blacken. Turn the oven off before bed, but leave the corn inside the oven overnight. It is this cooking that separates chicos from dried corn.

In the morning, take the corn from the oven, pull back the husks, and hang them or lay them out in the sun for a week or two. Brace yourself: the flies will notice your setup approvingly. You can cover the cobs with cheesecloth if you wish, but I just let the flies do their thing as the corn dries out. Whatever nastiness the flies deposit will dry and die and get washed off.

After they are bone dry, put on some clean work gloves and rub the kernels off. Clean them in front of a fan, or on a windy day, so the flecks of husk and whatnot can fly away. Store the dried kernels in freezer bags or jars in a cool, dark place. When it’s time to cook, give them a rinse and a soak ... and maybe a final rinse to lift off any remaining silk or fly turds, and add them to things, from ramen to frittata. Can them in salsa. Sprinkle them, pre-soaked, in stir-fries.

Traditionally, chicos are often cooked with red chile, onions, salt, oil and some kind of meat. Traditionally venison or lamb were used, but today people use chunks of pork, chicken or beef. Ribs are a popular cut as well. Cook the meat in the oil with onions and chicos. Stir in some chile powder and garlic powder if you wish (I would), and oregano if you want some herbal aroma. Make it as thick or brothy as you wish, adding bullion if necessary.

This is the base of a very old recipe. And like many old recipes, it’s not as fancy and complex as what they’re serving at the local bistro. Dress up your ancient little pals in whatever fancy outfits you wish. Call it Anasazi fusion. Call it summer, any day you want it.