When life gives you eggplants... 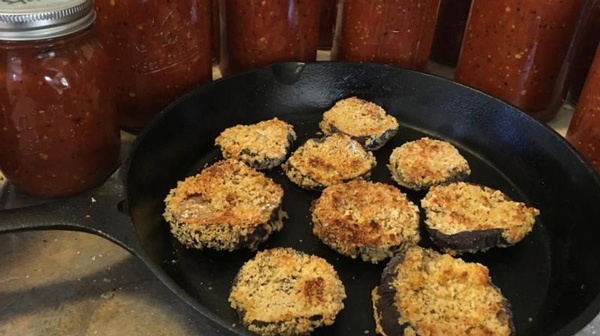 I frown upon driving a hard bargain at the farmers market. This is not some sweater market in Ecuador, where, as the guidebook tells you, bargaining is an opportunity for social interaction, and if you don’t talk them down by at least half you pay a hefty gringo tax.

At the farmers market, the vendors are generally not out to gouge you; they just want to make a First World living at growing food for you and your family. Prices are usually fixed, and growers don’t necessarily appreciate your feedback as to how their produce is valued.

And when the action is busy, haggling is more than just annoying. You and your hard bargain are blocking shoppers who want to shop. If you don’t care about exploiting farmers, then go to Wal-Mart. But if you want to participate in a system that’s fair, and bring home a better product that is likely to have taken less of a toll on people and the environment, pay up and move along.

But with all of that being said there is, actually, a time when it’s morally conscionable to strike a deal.

At market’s end, when the growers are wearily packing away their unsold produce, that is the time to make a deal. Especially for the stuff that is totally ripe and could very well be headed to the compost pile.

Nobody wants food to go to waste, which makes this a time when it’s OK to try to strike a mutually beneficial deal. This is not about simple grocery shopping, a cucumber here and a bell pepper there, but about major movement of produce.

It helps to cultivate a stable of farmers who will be amenable to this kind of wheeling and dealing. If you’re a market regular, you’ve probably already done this work. Don’t ask the price of something and then talk them down. Rather, begin along the lines of “How much do you want for the rest of your (blank)?” or “Got any (bleep) you need to get rid of?”

After you’ve done this a few times, the deals will start finding you. There are parts of the market where I can’t go, or I’ll be offered deals so compelling that I’ll end up spending the rest of my day in the kitchen dealing with it.

The other day, sure enough, I wandered over to that part of the market, and received an offer I couldn’t refuse. Two, 30-pound boxes of tomatoes. He threw in a box of eggplant to sweeten the deal.

Of course he did. This time of year, eggplant and tomatoes are inseparable. They appear together in great abundance wherever local or seasonal produce is sold. When both are present, you can’t have too much of either. If for no other reason than it’s not possible to have too much eggplant parmesan.

From moussaka to ratatouille, there is no shortage of iconic tomato/eggplant dishes from the Mediterranean region, including sauces, dips and main dishes. But eggplant parmesan holds a special place in my heart because it was my first exposure to this most dynamic of duos, in the form of an eggplant sub at Armando’s pizza, in Cambridge, Mass.

These days I’m not much of a sandwich guy, but the spirit of eggplant parmesan can be conjured from the same components – minus the sub roll. This is what I decided to do with my boxes of bargain produce.

I made an oven sauce with the tomatoes, following the recipe I printed last week. But any decent tomato sauce recipe will do. The real art here is in the preparation of the eggplant.

At Armando’s, they use a deli slicer to cut the eggplant into laser-thin slices, which is tough to do at home. So unless you have the tools, thick rounds are the way to go. They will be meaty and juicy. And they will be waiting in the freezer, ready to go.

One could prepare finished trays of eggplant parmesan and freeze them like TV dinners. But I prefer to prep and store the main ingredients – eggplant and tomatoes – and then cook the finished product as needed. With breaded eggplant cutlets and tomato sauce ready to go, the heavy lifting of preparing this dish is done. When the time comes, the ingredients can be assembled, with garlic and cheese and whatnot, and you will have yourself some instant Parma.

Slice the eggplant into ½-inch rounds and place them in layers in a bowl or pot. Between each layer, sprinkle about a half teaspoon of salt. When the eggplant is cut, layered and salted, put something heavy on top to compress the whole stack and slowly squeeze the water out. Ideally, leave it this way overnight.

The eggplant will give up its bitter water, which will pool at the bottom of the vessel, washing away most of the salt as it weeps out. Toss the salted slices in olive oil, about a third of a cup per four eggplants. Double the oil if you wish, depending on how much you like it.

Set up a three stage breading station. In one bowl, mix a cup of white flour with 1 tsp each of black pepper, garlic powder and paprika, and a half teaspoon of nutmeg powder.

With one hand, dredge a slice of eggplant in the seasoned flour, until coated on both sides, and drop it in the egg bowl. With the other hand or tongs, coat the eggplant with egg and then dredge it in the breadcrumbs. Lay these cutlets on a tray and bake at 400. As soon as you catch a whiff of browning, turn them. Remember, the bottoms will brown first so use your nose!

When golden on both sides, remove the cutlets and let cool to room temperature. Then place the whole tray in the freezer until cutlets are frozen. Transfer to freezer bags and freeze.

Thus prepared, whenever you happen to be in the mood for eggplant parmesan, thaw some cutlets, get your tomato sauce, along with some garlic and your favorite cheese – traditionally Parmesan and mozzarella – and get layering. The soft bargain you drove at the farmers market will pay you dividends all winter long.