Anarchy on wheels
Is the Single Speed Cyclocross World Championships the Snowdown of bike races? 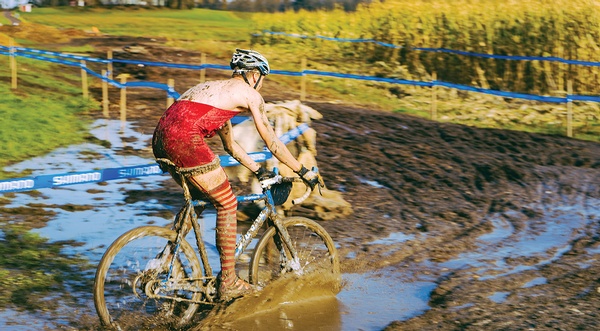 A participant in the 2016 SSCXWC in Portland, Ore., gets his thigh-highs muddy. Not for the weak or timid, this year's event comes to town this weekend, with racing Saturday at Durango Mesa Park and antics in and around town the rest of the time./ Courtesy photo

There’s a fun game I play with my friends where they ask me to do something crazy, and I say no, and then they ask me again, and I say yes. And that is exactly how I found myself signing up for this year’s Single Speed Cyclocross World Championships (SSCXWC).

The SSCXWC is an unsanctioned bicycle race with more than 300 riders that takes place once a year somewhere – so far – in North America (mostly U.S., but one in Canada). This year, it is in our little city of Durango, taking place at various locations around town from Thursday to Sunday, with the main racing events up at Durango Mesa Park, aka Ewing Mesa.

Single Speed Cyclocross is a race, sort of. The sport of cyclocross actually started in Europe (so they say) at a time when cyclists wanted to continue racing against their buddies through the winter months. So they rode over snowy and muddy farmlands with their steel-framed, rigid bikes. They deemed the experience “fun,” and now, many years – and twists and turns – later, has gone mainstream and is usually the sloppy end cap to a season of bike racing.

Participants in the SSCXWC generally ride their one-geared bikes around a course that has different obstacles and funky features (supposedly mimicking the hilly farmlands of Europe), and they all try to get to the finish line first. It all sounds very race-y, but the SSCXWC is actually bicycle anarchy. Races are mayhem. Riders are costumed and drinking, staying up late and partying, and waking up early and riding bikes.

Dylan Stucki, Durango’s SSCXWC organizer, is the one who brought the race to Durango in the first place. Stucki is a long-time, quintessential bicycling dude who spins circles around us all – literally and figuratively. Three years ago, in Ogden, Utah, Stucki grabbed the rights to host the 2020 (pushed to 2022 because of the pandemic) competition and did so by slurping fry sauce from condoms.

That might sound weird to you – because it is – but for a single-speed competition, it’s all part of the game.

Ever since its inception in 2006 in Portland, SSCXWC (and other single-speed races) have passed the hosting baton from town to town by making the bidders square off in some competition that sometimes has nothing to do with bicycles and usually involves things like consuming fry sauce in condoms. Whatever it is, the winner gets to choose the next location, and Stucki had his eyes on the prize.

“I won by a landslide,” he said. “No one could even keep up. There was no doubt it was coming to Durango.”

After the dark years of the pandemic and two years of self-proclaimed procrastination, Stucki brainstormed, planned and organized the event. He then pulled in a team of helpers, with bribes of beer, to come up with enough weird events to keep all of us – registered riders or not – highly entertained for three days.

The tomfoolery begins Thursday by weeding out some of the 250 registered male racers. Obviously, this can’t be done simply by pulling names from a hat, or even a race around the course. That would not be up to SSCXWC snuff.

Instead, the first round of knock-out qualifiers will include roller races at The Garage, which “might be” modeled off the All American Beer Mile, where participants have to eat a hot dog, sprint a mile (on your bike on rollers), and then chug a beer.

There are more qualifiers that continue through Friday, putting riders through “feats of strength,” aka more eating and drinking contests, but with the power of athleticism: chug a beer, do 50 pushups, then chug another beer, in under a minute. There will be barrel racing, tug-of-war, bike limbo and a few other events that will test both self-proclaimed drinkers and elite athletes alike. This might actually be the hardest part of this race in particular: finding the balance.

“There’s this weird convergence of racing and partying, and it all comes together at Single Speed Cyclocross World Champs,” Stucki said.

Stucki knows pro cyclists are trying to balance out the party shenanigans with the racing aspect, but he said “participating in everything is almost more important than actually winning.”

“We wanted to be part of moving the needle forward for people who are interested in participating in the sport,” Stucki said. “We want people to feel comfortable in whatever category they’re racing in. We have a men’s champion, we have a women’s champion, why can’t we have a non-binary champion?”

The winner of the final race, which is taking place on Saturday, gets tattooed at the after party that night at Ska Brewing by local tattoo artist Roger Seliner. If the winner doesn’t want the tattoo? Well, then the winner doesn’t win the race. Which has happened, Stucki said.

While registration is now closed, everyone still has a chance to attend all four days. Most of the events are open to the public, but the main event for spectators, Stucki said, will be Saturday, including folks on bikes dressed up in costumes, riding around through sloppy, steep, wet and historically fiery obstacles. And yours truly. Face down in the mud probably thinking that I’m so glad I said yes instead of no. More info and schedule of events: sscxwc20dgo.com/