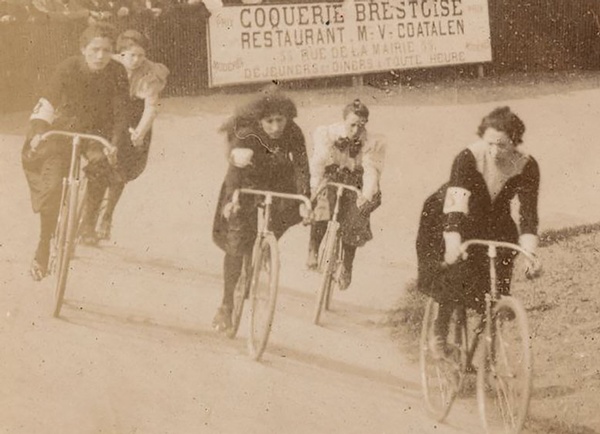 I often watch sports at bars where I sit and drink beer with my friends. The TVs are usually turned on overhead, and I will inadvertently, quickly glance at the screens above my friends’ shoulders while we catch up on life. Teams do stuff and score points, and while I’m on a bad date or my companion has gone to the bathroom, I will pay better attention to what is going on and silently cheer on the sports teams. That’s how I first started watching the Tour de France.

Le Tour de France started in le year 1903, but I started watching it over my friends’ shoulders at le local brewpub probably sometime around 2010. To the true-blue Tour fans, this pegs me as a newbie or a poser, but I don’t le care. Suck it up. Let’s move on.

The Tour de France is a fascinating event if only because the scenery is beautiful, and the event itself is super confusing. The race course goes through France but also sometimes other countries. (This year, it goes through four). It is around 3,500 kilometers (2,200 miles) and has 21 stages, each lasting one day for 23 days.

The 21 daily stages that last for 23 days are battled out between 22 teams, with eight riders on each team. To my understanding, each rider has a strength, such as flat roads, hilly terrain, climbing up mountains, or having a doping scandal and getting pee thrown in their faces. None of which are my strengths, which are riding to the grocery store and sometimes getting caught in a rainstorm in the high country.

Each team member of the Tour rides the stages, gets the time points (they’re not actually points, but it’s not sports without points), and whoever gets the least amount of time points is the winner of each stage. The one with the least time points in the end gets to stand tallest on a podium, receive medals, gets champagne sprayed in their faces (instead of pee) and wins a bunch of money.

And also there is a yellow jersey for the stage winners, and that’s cool.

It took me a while to learn even these basic premises because, while simple and admittedly practical, it’s still a lot. It’s more than just riding fast and crossing the finish line, and I’m super into that, because sometimes you just want to watch guys in tight Lycra ride their bikes through some neat terrain in some pretty scenery.

I say “guys,” because Le Tour is for le men only, and while the 2022 race is already really exciting – i.e. locals Sepp Kuss and Quinn Simmons competing – we can also be stoked, because it is the inaugural year of the Tour de France Femmes, an official women’s stage race.

This year’s historic ladies’ race is an eight-day event taking place the same day Tour de France hommes ends. While it’s still a mini version, it has been a long time in the making and hopefully brings the promise of more.

There have been attempted piggy-backdTour De France female races in the past: the Leulliot race; Tour de France Féminin; Tour de la C.E.E. féminin; and the longest-running and most recent, Grande Boucle Féminine Internationale. But these races were not officially operated by the TourdDe France organizers (the Amaury Sport Organization, or ASO), and so there were obvious inequality battles over, well, pretty much everything: pay, media coverage, marketing, organization, routes, etc.

So this year, after (only) 119 years, the ASO finally agreed to make the Tour de France Féminin an official part of the Tour de France. This means the ladies will get similar media coverage, the same event sponsor and, I assume, besides pay and cash prizes, they will have all the other advantages the men have as an official ASO race. Including, hopefully, the amount of champagne sprayed in their faces.

The ladies ride takes place July 24 – 31 and will span 1,029km (about 640 miles) over a mixture of gravel, unpaved sections and mountain passes. There will be 24 teams starting where the men end in Paris, and while they ride east to Lure, I will be sitting at my local brewpub, watching over my friend’s shoulder, cheering the women on.