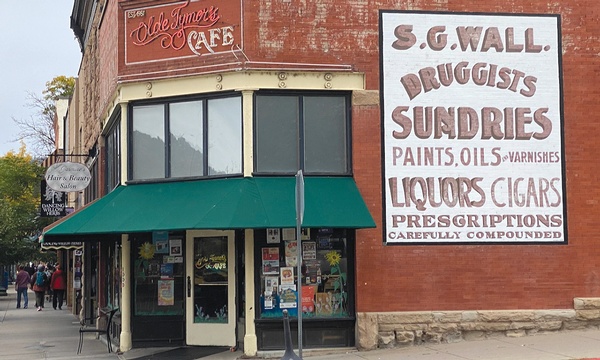 Olde Tymer's Café, the venerable beer and burger joint on 10th & Main, underwent an ownership change recently. The restaurant was bought by Mark Cavalli, who started working in the kitchen in 2020./ Photo by Sinjin Eberle

Who doesn’t love a great comeback story? Just when you think the champ might truly be down and out, they somehow pull themselves up and come back swinging – grinding to land every punch and eventually coming out with arms raised. So heartwarming, but in reality so rare, making the victory in the end that much sweeter.

We’ve all heard the stories around the restaurant industry about how truly grueling the past two years have been – places closing early in the pandemic, closing in the middle of the pandemic or just not quite being able to make it through the pandemic. Then the struggles with staffing and cost of living, all layered on top of the sheer fact that running a restaurant is hard in the best of times. Stack all these headwinds against them, and it’s remarkable that any of them have made it through, let alone thrive.

In the summer of 2021, I heard rumors that Olde Tymer’s Café – the classic burgers and beer spot at Main Avenue and 10th Street, was about to go through some big changes. Rumors were swirling and questions were asked, and then suddenly boom, there were signs on the doors about being closed for a while. If you peeked in the windows, the lights were off and chairs were stacked on the tables. Was this the end of yet another cornerstone of downtown Durango – taking after the permanent closure of the Irish Embassy, The Red Snapper and The Palace? Was this going to be the knockout punch for yet another “everyday Joe” restaurant after a nearly 40-year run?

Olde Tymer’s Café was founded in 1981 by Roger Roessler and some partners, who eventually sold the business to Roger’s nephews Keith and Kevin Roessler about 20 years later. Things were going along swimmingly until the pandemic shutdowns hit. While there were plans to do some remodeling and changes to the restaurant to take advantage of the down time, as time went on, the hardships from the pandemic lingered, and it looked less and less likely that they might pull it off.

Enter Mark Cavalli, who started working in the Olde Tymer’s kitchen in the summer of 2020 during the pandemic. At the time, Cavalli was working there part-time to help out a friend who was also a cook while he planned to secure funding to open his own bistro-style restaurant in town. As pandemic shutdowns continued, his funding was put on hold, so he went to work at Carver Brewing for a while, which offered more hours and pay.

Eventually, he was offered an opportunity to head back over to Olde Tymer’s full time. Cavalli told me, “I already saw the potential for the place at the time, so I took the job and left Carvers and came back here. Over the course of that year, I just fell in love with the building and the blood, sweat and tears and all that good stuff.”

At one point last summer, it looked like the restaurant was truly going to close if a deal couldn’t be made for Cavalli to buy it. So he kept negotiating and working through the process, and then, in October 2021, they were able to close the deal.

More than a year in, he’s hitting his stride. “I’m really getting to know my regulars now, what they like and what they order,” he said.

One thing that is clear from talking with Cavalli is the pride in the restaurant still being a family operation to this day. “We are family-operated as well,” Cavalli said. “My kids work here, my daughter works downstairs doing all the books, and my other daughter works in the kitchen. The grandkids are here all the time. So people see the family here – they really see us as a family place, and I think that’s bringing more support from the community.”

Cavalli, 47, grew up in Phoenix and moved to Durango in spring 2017. For nearly 30 years, he has been a professional cook. “I do food because this is what I love to do,” he said. “I could have made more money doing other things, but I can’t imagine doing anything else.”

One other aspect I had heard about this renewed vision for Olde Tymer’s was a unique ownership model. Cavalli described to me how a handful of employees are participating in a program where, if they work there for more than two years and commit to staying after that, they get 1% ownership of the business free of charge.

“Hopefully we grow the corporation with more money to make for everybody, and the hope is that people will buy into it more – feel more ownership themselves. We may not be able to compete with some other places on wages, but we can compete in a different way together,” Cavalli explained. “After that, if they do want to leave, they could sell their shares back to the corporation (based on the value of the business), but not sell them out on the street.”

Cycling the investment and loyalty back into Olde Tymer’s is yet one more metaphor for the family business, and it looks like it is working, as retention is better even in the face of all the challenges facing restaurants right now. Like most other establishments, cost of living, rising food costs and secure, reliable workers are the biggest challenges Cavalli – and essentially all other restaurant owners – are grappling with. Some of the bigger places might be able to raise wages to lure workers back in the door, but a scrappy operation like Olde Tymer’s doesn’t have that luxury when there are upgrades to be made and a building to maintain. How any of these operations hold it together is simply amazing and impressive.

We left our discussion thinking about the vibe that defines Olde Tymer’s. I like going in there to enjoy a comfortable setting, maybe just take in a Broncos game with a burger and a beer, and enjoy the positive, upbeat staff and energetic feel of the place. Cavalli described it as being a “Cheers-type of place,” but with good food at a reasonable price. “Where you can come in and just relax and do your thing – not be stressed out – and spend an hour or two,” he said.