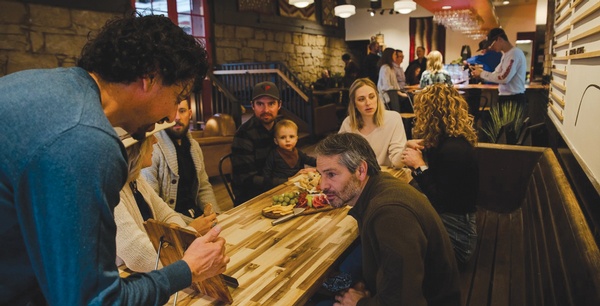 Jared Scott, left, owner of EsoTerra, goes over the drink list with customers at the cidery's downtown location, near Main Ave. and College Dr./Courtesy photo

Is there anyone among us who doesn’t love a good apple? I’m not talking about the soft, chewy warehouse dregs we get in late summer. I mean the crisp snap of firm fruit as your teeth release the juicy, tart pop of flavor on the first bite. Then the unconscious quest to dig out the very last chunk of sweet flesh on your journey to the core – a fine seek-and-destroy mission if there ever was one.

I grew up in Colorado’s North Fork Valley, a fruit-crazy hub. We gauged seasons by the fruit – the end of the school year (cherries) on through the heat of summer (peaches and apricots) into the amber sunset days of fall (apples and pears), as if we all simply orbited the orchard circuit year-round. But as much as I loved our little valley, little did I know about the apple mecca that existed just a few hours south in Montezuma and La Plata counties. Fortunately, other people did know the historic, if not hidden, fruit gem tucked in Southwest Colorado.

Jared Scott and Elizabeth Philbrick met in graduate school in Fort Collins and quickly fell in love. And while they were apart for much of their early relationship, good intentions and some careful planning eventually landed them together here in Durango. Scott worked in Geographic Information Systems and IT for the Forest Service, while Philbrick worked initially as a congressional staffer on Capitol Hill before landing as a planner for a firm here in town. Scott started making cider in 2012, experimenting with both new-world and old-world styles and exploring and studying the diversity of apples and the more than 600 varieties found across Southwest Colorado.

As his curiosity and passion grew, he became associated with Jude and Addie Schuenemeyer, co-directors of the Montezuma Orchard Restoration Project, a nonprofit that “works to preserve Colorado’s fruit-growing heritage and restore an orchard culture and economy to the southwestern region.” From there, Scott engaged his mapping skills and worked with MORP to map the locations of many rare and unique orchards (sometimes consisting of a single tree) across the region. After making cider with Mancos’ Fenceline Cider for about a year, Jared and Elizabeth took the plunge and opened EsoTerra in the old Mountain Sun apple juice factory in Dolores, which produced more than 2 million gallons of apple juice a year in its heyday.

But as these stories seem to go lately, they started their business in September 2020, just as the tentacles of COVID-19 were reaching into the rural areas that had escaped the worst of the pandemic for months. Through grit and true commitment, Scott and Philbrick hung in there to keep the business going, emerging once the worst of it was behind them.

I joined them at the grand opening on Dec. 31 of their new Durango tasting room, located at the corner of College Dr. and Main Ave. in the space most recently occupied by Mountain Monk Coffee, and Starbucks before that. This is not their first foray into Durango – EsoTerra was previously wedged in the back corner of the Outdoorsy RV space in the 900 block of Main until Outdoorsy’s plans abruptly changed, leaving EsoTerra without a home. After a couple of weeks of energetic hustling, they found their new home, and within a couple of weeks remodeled the new space with their “Industrial Moulin Rouge” décor, as Philbrick described it, and opened their doors.

Sitting with Philbrick, it’s hard to not be consumed by her energy and excitement for what they have created – both in Dolores and now here in Durango. She explained to me that EsoTerra is a made-up word, combining the spirit of being eccentric or obscure, and “terroir” meaning “of the land.” While her bubbly enthusiasm is certainly eccentric, one can’t help but feel her deep intention and acknowledgement to the land, to the history steeped in our surroundings, and a care and commitment to her friends, employees and community.

Philbrick explained how they behave more like a winery than a conventional cidery, in that they are extraordinarily thoughtful about what apples they use, sometimes even down to the specific tree within a certain orchard. And, given that they hand-pick every apple, they are intimately familiar with everything that goes into them.

No sugar is added to their fermentation, allowing the sugars in the juice to do their thing, creating a generally drier, cleansing mouthfeel in the final product. And that is how they begin the initial conversation with a new customer – feeling out how they think about white wine, then guiding the patron through their menu of ciders.

Some include snappy, astringent palate-cleansers; sultry, barrel-aged sippers; and slightly richer, creamier Forswunk. This is the one I enjoyed, which had a bit more body than others, but with a light, tropical essence that went down oh, so easily.

Ultimately, though, the goal of EsoTerra is that you can taste the land and the diversity of our region’s apple history in every glass. I certainly picked up on both the unique varieties on tap at the tasting room.

“We have been overwhelmed by the response and the beauty of this community,” Philbrick said. “We care so deeply about this place and our employees, and we just love telling people about the trees and the cider they create.”

EsoTerra’s slogan is “Savor the land, drink real cider,” and I for one can’t think of a better way to relish the history and diversity of our area, with people who are so invested, engaged and hopeful for what is to come.