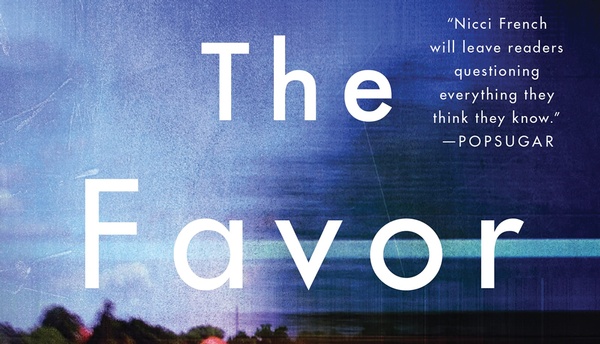 This time of year, and contrary to the simple formula of supply and demand, it seems that book publishers of fiction offer slim pickings. Perhaps they throw their weight behind profitable seasonal marketing to kids or young adults? Plus, the giving season is flooded with door stop biographies from a thinning field of distinguished wirepullers.

And when mysteries are not on the front burner, Nicci French is the go-to author that gives you confidence you will read a damn good book.

January is flooded with so many outstanding mysteries, I may have to bundle them in the next “Murder Ink” column. But, on par with any marquee fiction authors, you’ll not be disappointed in “The Favor” by French, released in paperback last month by William Morrow.

Nicci French, which is actually the pseudonym of English husband-and-wife Nicci Gerrard and Sean French, has published 23 books in the crime fiction genre since 1997, which have sold worldwide in many languages. And when recognition is being lavished on standout contributors to psychological thrillers, French is up at the head of the line. French books are so flawlessly satisfying that it’s certain many readers have read every one. I have reviewed at least a half dozen over the years.

Every French book is another immersion into surprise and approaching dread, each plot is a slow boil to a crescendo of literary prestidigitation that accompanies wide-awake astonishment. “The Favor” is something of a diversion for French, though. Not in craftsmanship, certainly, but in plotting. It’s an in-your-face story that begins with a car wreck one summer evening where a coming-of-age couple in the impressionable stage of planning a future begins a strange journey in an impressionable relationship.

We’re in England, outside of London. Liam is the swashbuckling “Gadsby” interpretation of a 17-year-old, who drinks and smokes and is suave and inelegant. Jude is waiting for her acceptance letter from medical school – a striver, she has it all mapped out, trying with all amplified vigor to be a mensch.

Four were in the car. Liam was drunk driving and bursting con brio and hardly noticed when the car went careening off the road. Jude escaped with head trauma of physical and psychological nature. There was a death in the back seat, and Liam was arrested for everything that went wrong that night and went to prison for 10 years.

French knows how to build a set and how to set the hook. Ten years later, Jude is engaged to a swell guy named Nat and writing wedding invitations. She’s comfortably practicing medicine when Liam shows up.

“I got everything I wanted, and you lost most of what you wanted,” Jude whispers repentantly. “Afterward, you rejected me.”

Liam broke the veil of wistfulness and put a piece of scrap paper in front of Jude’s cold coffee with an address in Spring Cottage, a hamlet a good drive outside of London, with a post code Jude didn’t recognize. “I want you to go there on Saturday,” Liam said. “I wouldn’t ask you to do anything wrong. Though you mustn’t tell anyone. Not even this Nat of yours. Nobody at all.”

“All right,” Jude whispered, determined to help the boy she loved in the man she didn’t know and distrusted.

It’s not fair to tell you any more of this cresting story, especially since we’re only on page 25. French now has the ingredients to put the pedal to the metal, and this strange but simple favor asked by an old flame and fellow crash survivor turns into a unique and perfectly irresistible example of unintended, lethal consequences.

While French may not be a marquee name, it is no backbencher. And remember to ask Maria’s Bookshop for a 15% Murder Ink discount.