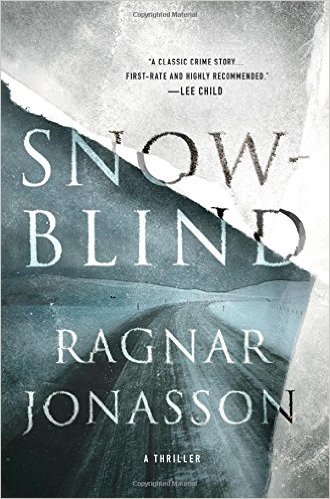 Beautiful is not usually a descriptor applied to crime fiction, but it’s the first word that comes to mind when introducing Icelandic writer Ragnar Jónasson’s debut novel Snowblind. And we might as well add stunning to describe Quentin Bates’ English translation, and let’s blow the doors off and call Snowblind one of the 10 best works of fiction you’ll read this year and predict that it will win awards in at least one of the world’s handful of literary prize-giving organizations. If Jónasson weren’t from Iceland, he’d win recognition, too.

With Iceland’s literacy rate highest in the world, coupled with the bleak beauty of this country touching the Arctic Circle, some of the best noir crime fiction oozes out of this remote island. To mention a few writers, there are Yrsa Sigurdardóttir and Óttar M. Nordfjörd as well as Arnaldur Indridason, who started me reading crime fiction with his 1993 Jar City, which became an international phenomenon. And now with his first novel, after being known for translating 14 of Agatha Christie’s mysteries into Icelandic, Jónasson hovers near the top of Iceland’s literati as well.

Snowblind is the story of young Ari Thór Arason, adrift in his twenties, living in the capitol city Reykjavik with Kristín, who is focused on medical school. Ari Thór gives up his attempt at theology and philosophy degrees and in an unlikely alternation, enrolls in police college. He’s encouraged by Kristín, who has fitted their lives together as the happy couple they have up to now been.

Before Ari gets to his final exams, he gets a phone call from the chief and one of the two policemen in the northern coastal village of Siglufjördur – population 1,200 and dwindling – offering him the option of finishing his final term while on duty. He must accept the posting on the phone or lose the opportunity, and with feverish imprudence, he accepts and sheepishly breaks the news to Kristín. It is this solitary action that portends our first gossamer glimpse of Ari Thór’s drama.

Snowblind is fueled by the goings on in The Dramatic Society of Siglufjördur and its octogenarian chairman, literary celebrity Hrólfur Kristjánsson. There is also the new ingénue from the far western spit of land called Westifjords, and an ensemble of characters who nearly thrive in a town where snow closes access for most of the year and all the residents are below average. This is a town of secrets, where Ari Thór learns quickly to trust no one, where secrets and lies are a way of life. It’s a place to yearn, wither, suffer and regret silently as the relentless snow. Jónasson depicts this elegiac state through the heart and initiative of young Ari Thór – a decent human being – and it is quite beautiful.

Then one day, the octogenarian Hrólfur is found dead and reeking of alcohol at the bottom of the stairs in the community theater. The death is assumed to be an accident by the police chief but not by the eager initiate Ari Thór. The plot thickens when, soon after, when a young woman is found lying half naked in the snow, bleeding and unconscious – “The red stain was like a scream in the silence.”

Snowblind is published in hardcover by Thomas Dunne for Minotaur Books, the leading publisher of crime fiction. Again, for the cost of lunch at a slow food joint, you will be transported to adventure in a far-off land and have a book you will surely want to reread and lend to friends.