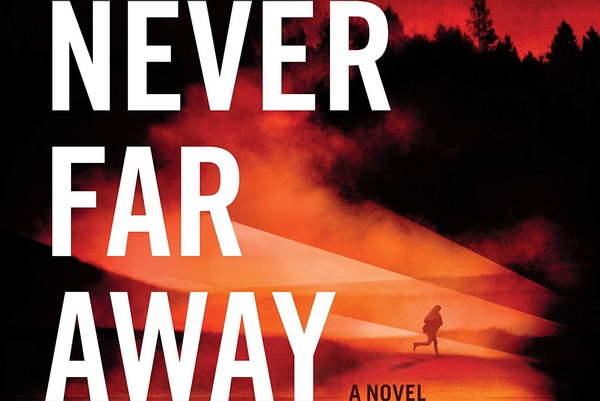 Michael Koryta is one of those household names that didn’t make it across the threshold. He’s out with a new book, though, his 16th – Never Far Away – which will be a big hit for him and his publisher, Little, Brown and Co. And he will once again show aspiring writers how long-form crime fiction is done, and again leave his notoriety at the front door unless you invite him in.

“They circled the car with guns in hand orbiting but never intersecting, like twin satellites of death. Nina sat with her hands on the steering wheel and her eyes straight ahead. The tears had dried on her face. The shakes had stopped but her jaw ached from clenching her teeth. She watched them move and listened to them talk and she didn’t say a word. There was no point, and she understood this. They would make their decisions and then she would die.”

This is the opening paragraph of Never Far Away. And the tension and suspense and succinct writing never lets up, gets even better as consequences of events loom larger, suspense builds and timing ticks like a fine watch.

Nina Morgan had been working as a bush pilot for The Lowery Group, a security firm doing business on both sides of a narrow path snaking through the under- and over-world, run with an iron fist of its overlord, J. Corson Lowery. Lowery’s competition and sometimes-outsourced contractor was the Blackwell family, another security contractor working in the penumbra of officialdom. Its heir apparent is the young Dax Blackwell, trained in the clandestine arts from youth, an unrepentant killer to be sure but not of the old bloodbath league. He’ll be a critical player in this drama.

And the drama is the consequence of testimony Nina gave at trial against a couple of Lowery’s goons who were sent to prison. This foretold the guaranteed extirpation of Nina, her husband and two infant children unless they were more than clever enough to disappear without even a whiff of fragrance. Lowery contracted the disappearance of Nina to the Blackwells, whose operatives forced Nina’s car into a remote Florida wasteland and were circling and devising the best way to kill her. But they didn’t kill her; they allowed her to cut a vein in her hand and smear blood around, especially on the headrest. Then they cut a plug of her scalp with a hunk of hair, shot a hole in the headrest, doused it with blood and embedded it with scalp and bloody hair before giving Nina directions for leaving the scene.

Nina changed her name to Leah Trenton, moved to the dense woods in northern Maine. Her husband changed his name to Doug Chatfield and moved with the children to Louisville, Ky. Ten years had passed when Hailey, Leah’s 13-year-old daughter, used a phone number her father made certain she’d memorized to call her Aunt Leah if anything ever happened to him. Doug was killed in an auto accident coming home from getting Sunday donuts for Hailey and her brother, Nick. Hailey made the call. Leah left immediately to pick up the kids, bring them back to her private, rural world and begin making plans to avoid Lowery’s long-simmering revenge once he knew about Hailey’s phone call, which he would.

Never Far Away is a virtuoso cat-and-mouse adventure that few writers can achieve without that critical suspension of disbelief, sobering up and revealing the fat man pulling the strings behind the curtain. As soon as Leah scoops up her children, finds a new place to live in Maine where she’s unknown and a little more untraceable, she makes the risky calls to a couple of her old Lowery operatives in hiding. She’s suffered for 10 years of forced absence from her children, and now she knows the three of them will be hunted down and killed by Lowery himself for her betrayal. She knows she has no choice other than preparing to kill the man himself. Leah is a pilot, though, not a gunman. One of her furtive coworkers, the one who encouraged her to testify against Lowery’s killers, risks his invisibility to call the one person who might hate Lowery enough to help Leah: Dax Blackwell.

Never Far Away gets better with every page. You’ll be reading at breakfast, reading in bed long past time to sleep and at stoplights, and your thoughts will be interrupted all day long until you finish. And then you’ll get flashbacks; the story is just that exciting and flawless. So while your friends will still not know the name Michael Koryta, you’ll know you’ve discovered the path not beaten down by lazy top-10 readers who think celebrity writers hung the moon. Never Far Away was released clothbound on Feb. 9. So, since you’re saving money on lunches and movies and concerts and bottles of wine brought to dinner parties, spring for a book. And let Maria’s Bookshop know you’re a “Murder Ink” reader for a 15 percent discount.