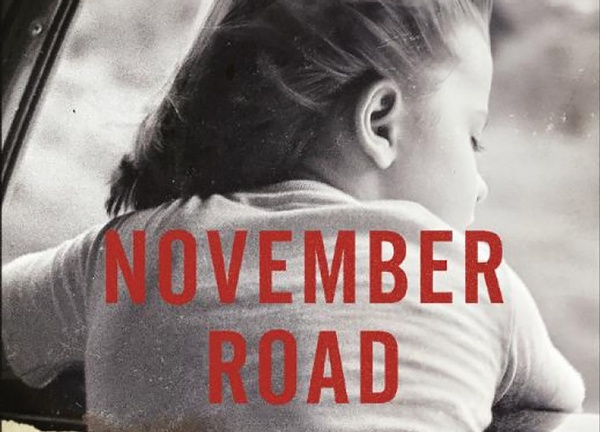 Every once in a while, I get a hold of something that’s beyond compare, something so nearly perfect that the French in their fastidiousness for language have a word for it: nonpareil. There is such a book being released by William Morrow on Oct. 9. And as we’re nearing the end of the year, I have to say that November Road, by Lou Berney, will be among the few “Murder Ink” books vying for my “Book of the Year” pick. (Bluebird, Bluebird by Attica Locke comes right to mind, as does IQ by Joe Ide).

Berney’s The Long and Faraway Gone was heralded as the best crime novel of 2015, with the Edgar, Macavity, Anthony and Barry awards. November Road will match those accolades, no doubt, and quite possibly be the crowning performance transcending the crime fiction genre into mainstream literary fiction and prove once and for all that mysteries cannot just be relegated blithely to the unwashed.

The “November” in November Road is the November of 1963, the 22nd day of a month that put Dallas on the map. It also fixed in the minds of a dumbstruck country conspiracy theories that all made far more sense than ordinary Lee Harvey Oswald firing three perfect shots into John F. Kennedy from the sixth floor of the Texas School Book Depository with a $30 rifle. Berney’s construction of the backstory to the Kennedy assassination is so convincing that the plot never addresses the assassination itself. During Oswald’s 1950s childhood, he lived in New Orleans, returning again for five months in 1962 before taking up residence in Dallas. Berney so very cleverly thinks of this faint New Orleans connection of Oswald’s, easily envisioning an organized crime underworld for the Big Easy. Then, with an unnoticed sleight of hand, he tells the story of Frank Guidry, the fixer for big crime boss Carlos Marcello.

Carlos orders and Frank obediently parks a freshly stolen Cadillac Eldorado on an upper floor of a parking structure, two blocks down from Dealey Plaza, the day before JFK was so impeccably shot. If Frank doesn’t get told why, Frank doesn’t ask why. He’s a right-hand man, a go-to soldier who wears bespoke suits, alligator shoes and lives large. He knows his strengths, his talent for making friends, staying razor sharp and being the cock of the walk.

It seems, though, that Frank saw too much in Dallas. Someone drove off in the sky-blue ’59 Cadillac on that day of such confusion, after a shot a warehouseman could have never made in a hundred years. And Frank heard too much when Carlos ordered him to pick up the Eldo at the Dallas airport and drive it to Houston and make it disappear. And this is where November Road begins the extraordinary story of Frank knowing he knows too much, knowing there’s nowhere to hide, and how he lives one day more.

California is where you go in 1963 to get lost. People are pouring in for the good life; nobody knows anybody; no crime families are established for Carlos to ask a favor of. Frank drives a burner car west and on the way spots an attractive damsel in distress, Charlotte, on the side of the highway with her two 10-something year-old daughters. He stops to learn that they’re escaping their dull, foredoomed life in Oklahoma, leaving drunk husband and father, escaping to the Golden State and a life of purpose. Frank does the math, helps this needy young family, and it doesn’t hurt at all that he shall now be traveling as a family, less noticeable and maybe thinking of living in fragments of weeks instead of days. He pays the mechanic to declare Charlotte’s car irreparable, and after a couple of days on the road, he’s charmed himself into a family headed west for the sunshine, white beaches and opportunity.

Both these flawed and very real people are running away from a death of some kind, and we’re just on page 47. This is a hardback book. It’s worth the money. And with the 15 percent discount for “Murder Ink” books at Maria’s Bookshop, be at their door early next Tuesday and skip lunch to pay for a story you’ll want to put on a shelf with books you’ll never part with.