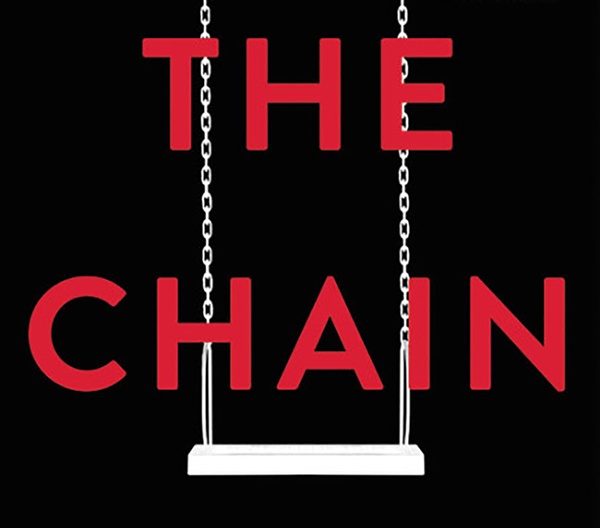 Adrian McKinty is one of those rare writers who creates characters and dreams up stories that are consistently real and sizzling. He was born and raised in Belfast, Northern Ireland, during the Troubles, and the viciousness of those times informs his noir procedurals.

He was propelled to the top of the pyramid of noir crime fiction with his Sean Duffy series of five books beginning in 2012, which all won top literary prizes or were shortlisted in the U.S. and abroad. McKinty is a caustic writer, and I have given up on more than a few of his books as too lion-hearted and just not my taste. If you’re interested in pursuing McKinty’s Sean Duffy stories, Rain Dogs and Gun Street Girl will not disappoint. And now McKinty has left his payday Sean Duffy to test his mettle on the most challenging narrative he has to this point attempted.

Released this month by Mulholland Books is McKinty’s The Chain, a story so unlike anything out there and with writing so pitch-perfect, McKinty will have to stretch far to ever hit such pure notes again. He will be showered with the prizes for this book that he certainly deserves, but if he can’t duplicate the pathos and subtle suspense in his next book, McKinty risks being tossed into the dustbin of nearly great crime writers. The Chain is a big risk for McKinty, and I’m sure neither he nor his handlers know just how big of a risk a book this good presents.

Telling you anything about The Chain is telling you too much. Author Don Winslow calls it “Jaws for parents.” It’s the story of Rachael O’Neill, a more than middle-class, divorced mother who gets a call an hour after her 13-year-old daughter, Kylie, walks to the corner to catch her school bus. “I’m so sorry Rachel, I’ve got some terrible news for you. Have you got pen and paper for instructions – I’ve kidnapped your daughter.”

Nothing unusual in crime fiction about kidnapped children, right? But this is different. This is like a chain letter, that if you don’t pass on your child will be killed: “You have to do it exactly the way I’ve done it,” the electronically distorted female voice instructs. “You must write down all the rules and you cannot deviate from them. If you break the rules or call the police, you will be blamed and I will be blamed. Your daughter will be killed and my son will be killed. So write down everything that I am about to tell you ... you’re in The Chain now Rachel. We both are ... you have to produce $25,000 and kidnap another child. And The Chain is going to protect itself. If you ever talk to a cop, they’ll know and they’ll tell me to kill Kylie and pick a different target and I will.” This is all revealed before p. 13, and there are 321 pages in this hardcover book available July 9. Get your order in at Maria’s, and don’t forget to ask for your 15 percent “Murder Ink” discount.

There are two more standout books that you need to know about, both released two weeks ago. Denise Mina is the muse of crime fiction writers, fittingly from Glasgow, Scotland. Her new book is titled Conviction, and it is every bit as insubordinate as we would expect from this recusant novelist. She’s made the varsity with The Red Road, The Long Drop and The Dead Hour. I love her books; she has frequent, remarkable moments that can make a reader swoon.

And another late June release, from William Morrow, is Girl in the Rearview Mirror, a debut novel by Milwaukee aspirant Kelsey Rae Dimberg. Finn Hunt is spotted working at a dull office job by the entrepreneurial son of a senator from Arizona and is hired to be nanny to his precocious 3-year-old daughter. Dimburg’s story is so alive, her characters so real, her writing so chaste that you’ll be reading this at stoplights. If Girl in the Rearview Mirror isn’t shortlisted for big literary prizes, it’s only because Dimburg is the new kid on the block and has a bad agent. Look it over at Maria’s; it’s a subtle, domestic mystery that I’ll look forward to reading again next year.

I’m out of space. Start with the Dimburg book, move on to McKinty’s The Chain, then read Mina’s book quickly. Carpe diem.