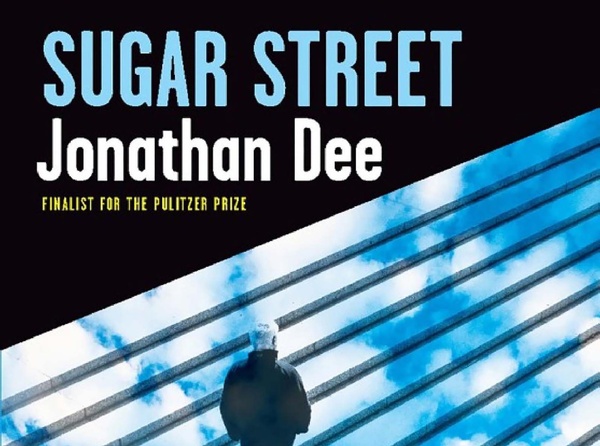 Let’s start out the new year with a peculiar little book that’s fascinating in its atypical way and maybe even unusual enough to fit in with our conspicuously peculiar sociopolitical climate.

Jonathan Dee was contending for a Pulitzer Prize in 2011 for his novel “The Privileges” and has received fellowships from the National Endowment for the Arts and the Guggenheim Foundation. He’s a former contributing writer for the New York Times Magazine, a senior editor of the Paris Review, and a National Magazine Award-nominated literary critic for Harper’s and the New Yorker. He certainly has the bona fides to be taken seriously, and with his latest hardback novel from Grove Atlantic spanning a courteous 206 pages, we have to give Dee respect for writing an unconventional story well. And in my opinion, he’s written an interesting and even poignant narrative reflecting the extraordinary times we find ourselves living in.

“Sugar Street” is the name of Dee’s seventh published book, about an unnamed, mostly ordinary man who decides to embezzle $168,048 from his partner in a failing travel agency then disappear forever.

Written in the first person, “Sugar Street” is an avenue where our protagonist rents a room after meticulously avoiding a minefield of surveillance for five days to arrive at nowhere he’s ever been or heard of and after a quick but thorough reconnoitering. “Your first instinct might be that the best place to disappear would be the country, the woods. But no, it had to be a city I figured: navigable by foot or mass transit, big enough to be anonymous in. Nothing too cosmopolitan, though, not someplace anyone of my acquaintance would go for a vacation or for some conference or convention. I’ve never so much as passed through; I know no one here; I know no one who’s ever even been here. Nothing to connect me to it: not the tiniest filament of logic or intuition to lead anyone who knew me to suspect that this is where I might have gone to ground.”

Disappearing is more than difficult anymore, nearing impossible when you get right down to trying. “Sugar Street” is more of a memoir of a fictional character attempting to outsmart the systems that are smarter than anyone trying to be perfectly smart.

The book opens with:

“The American Interstate highway system. Wonder of the twentieth-century world. Smooth, wide, fast, inexhaustible; blank, amnesiac, full of libertarian possibility; burned into the continent like the nuclear shadow of the frontier spirit, even if you happen to be traveling east instead of west, not much difference anymore. Route 66, Jack Kerouac, all that shit. But at some point, I snapped out of it and remembered the truly salient, non-mythological fact about the interstate of today, which is that law-enforcement cameras are everywhere. You can’t travel 10 miles in any direction without your movements being logged, your license plate photographed, your face. Certainly once you’re on the highway, there is no way to get off it again without all those things happening, without your whereabouts becoming data, instantly. Right. No more highways, then. I pulled my hat down over my eyes and got off at the next exit, drove around until I found a nonchain gas station, bought a Three Musketeers and an old, folding paper map of the state. They still make them. I remembered my E-ZPass, another data bomb, and threw that into a construction dumpster.”

Our man sleeps in his car along the route to somewhere that turns out to be Sugar Street, occasionally querying a worn out clerk late at night in a run-down motel lacking surveillance cameras if he’d take cash for a room, finding stand-alone greasy spoons behind burned-out street lights to eat, keeping to the bypassed routes east, obeying every law, looking a facsimile of normal.

When he finally reaches Sugar Street and a “For Rent” sign in a broken, first-floor window, he inquires to a once-comely now booze-ravaged landlady about the rental. With a separate entrance up to the second floor and windows facing the street, a deal is struck, cash is paid in advance for six months so a background check is irrelevant, and a single, pleasant and obviously unattached man is about to blend into anonymity that he knows is against the laws of nature.

Oh, did I say that his money is stolen; did I say that a murder is in the wind? There’s plenty more story here than I have even hinted at. We get to like this man because of his proactive disaffection for the surveillance state, for the goodness he displays on Sugar Street, and as much as we would like tranquility, poetic justice is ofttimes prepossessing.

A peculiar, allegorical book written by a talented, wary penman who’s warming up for another chart topper. “Sugar Street” is just right for January 2023. And Maria’s Bookshop will give you a 15% discount on Murder Ink books, just ask. ?