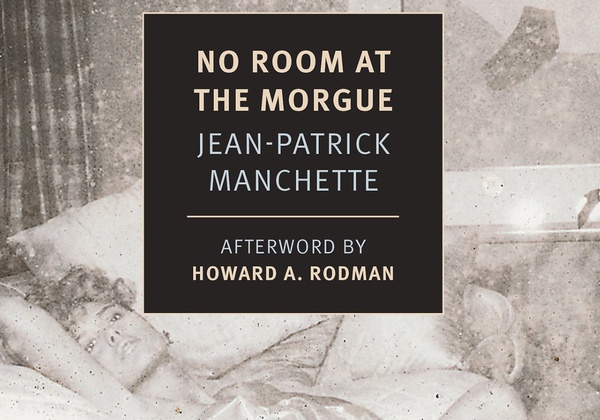 Before the onslaught of spring book releases and as a respite from the ongoing turmoil of sleazy politics and germ warfare, today in “Murder Ink” we’ll be taking a look at one of crime fiction’s original creators of the noir genre. That pioneer is Parisian Jean-Patrick Manchette (1942-95), who originally wrote No Room at the Morgue in 1973, which was only recently translated by New York Review Books Classics, an imprint of the preeminent literary journal, The New York Review of Books.

Manchette’s 10 short noir novels are commentary on social and political devolution through the lens of criminal villainy, not so much about the lurid pulp goings-on of his unfocused characters and messy narratives. He was known during his career as a troubled perfectionist who sweated out each word on every page, doubtful of having talent but driven to write more to challenge the establishment from his leftist perch.

Manchette’s first two novels were published in 1971, Corpses in the Sun and The N’Gustro Affair, both of which were well received in France. The novels established a nearly sudden change in crime fiction geography from the formulaic police procedurals to what Manchette denominated as “neo-polar” – the feeling of detachment, pulp tragedy, iniquitous politicians and razor -harp ideas rather than intricacies of breathless plotting.

No Room at the Morgue recommissions a familiar private detective of Manchette’s, Eugene Tarpon. We catch up to him after he’s prematurely retired from gendarme police service for shooting and killing a political protester. He opens a private investigator office in a fifth floor walkup where he sleeps on a foldaway and has a junk desk in the small dining area. He’s broke, financially and emotionally. He hasn’t even had his first client and has made all necessary plans to vacate and move back to his mother’s home in the suburbs to veg the rest of his mediocre life away. Then in walks a stunning young woman with the provocative name of Memphis Charles. She has come from her apartment where her roommate Griselda lies in a puddle of blood with her throat cut. She found Tarpon from remembering his TV interview about the protester he unintentionally shot and killed.

“I turned and leaned against the closed door and looked at the damsel in distress. She’d just sat down on my unmade bed and right then she must’ve felt faint; her face turned a greenish color, and she fell over and slid off the bed. She stayed sprawled out on the floor. I didn’t think I’d ever seen her before. I decided to make some coffee.”

Manchette’s protagonists, and in fact all of Manchette’s actors, are losers or has-beens. And the crimes and wrongdoings are just vehicles for social comment: “‘Listen kid.’ I was trying to be fatherly and offer good advice. ‘If there’s a murder, or suicide, or who knows what, you’ve got to call the police, that’s all there is to it. You don’t go running to a private investigator. Not in real life. And then, in real life, a private investigator deals with divorce, store security and, when he has more prestige than I do, industrial spying. Not violent death. There’s a telephone in the next room and you’re going to pick it up and dial the cops.’”

With fatherly goodwill, Tarpon walks Memphis to the phone: “She picked up the phone all right, the vixen, but to use it as a hammer. She knew exactly where to strike. I was suddenly disconnected from the space-time continuum.”

Tarpon came around, Memphis was gone and, of course, this pulp-detective scene sets in motion a romp that will include Israeli criminals, American creeps and kidnapping. Tarpon himself becoming a suspect in all the subsequent murders, car fires and his own stab wounds and torturing. It’s all here, thrown in like a stew made from leftovers. And while Tarpon is putting one foot in front of the other, the irony of a ridiculous plot soon becomes funny – like making coffee as his first client slumps to the floor.

Manchette is not for the amateur mystery reader, but if you’ve been keeping up with “Murder Ink” recommendations, you’ve tasted the best in crime fiction and have the experience to enjoy this respectfully short and sophisticated book. It can’t be gulped down; it’s not going to keep you up overly late or reading at stoplights. But, like that one crème brûlée you’ll never forget, Manchette will set a hook in you and you’ll have another touchstone with which to discern your next reading. My favorite Manchette books are The Prone Gunman, named Top Mystery Book of 2002 by the New York Times Book Review; Ivory Pearl; and Three to Kill.