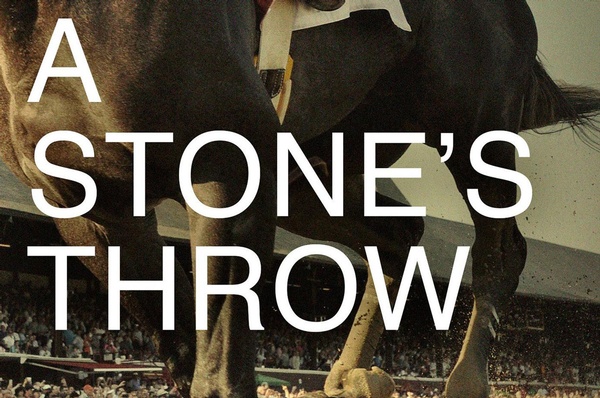 In celebration of a horse called Justify and a 52-year-old jockey who were only the 13th pair since 1919 to win all three jewels of the Triple Crown, “Murder Ink” this month will feature another crafty longshot, A Stone’s Throw by veteran author James W. Ziskin.

This isn’t the first we’ve seen of a Ziskin entry in the “Murder Ink” stables. I’ve reviewed most of Ziskin’s six other Ellie Stone mysteries over the years.

As with Robin Yocum who was extolled in June’s “Murder Ink,” Ziskin is a top midlist author who writes flawlessly plotted narratives with Kodachrome-vivid characters at a length that doesn’t elicit a gasp. I especially look forward to the next Ziskin mystery because of his love for language – we both have an unhealthy adoration for the perfect sentence – and Ziskin nails it time after time. And, more germane to the reader, he has created a most charming character in the small-town newspaper reporter Ellie Stone. Percipient, wily, single and attractive, she is dedicated to uncovering the truth. She likes her scotch and admirers, and is manipulative and terrific.

This is Ziskin’s sixth Ellie Stone story. It’s not his best – the fifth book in the series, 2017’s Cast the First Stone, won a prestigious Anthony Award and was nominated for a host of other crime fiction awards. This latest effort gets a little strained – but Ellie is her usual charming and sagacious nuisance. And even an overplayed plot by Ziskin is carried deftly by our winsome heroine and flawless wordsmithing.

Set in the early 1960s, the story starts when there’s a fire in one of the stables at the once glorious but now derelict racing stables at Tempesta Stud Farm. The stables are not far from the famed Saratoga racetrack north of Schenectady in upstate New York, and close to New Holland where Ellie is one of two reporters for the New Holland Republic. When the barn fire lights up the police scanner, Ellie is out there at five in the morning with her camera, Tri-X black & white film, and a dozen flashbulbs.

Poking through the steaming rubble after the fire department got there, Ellie, accompanied by a dyspeptic Saratoga County sheriff deputy, picks at a length of charred fabric.

“It looked like silk. Black and orange diamonds on white, and soaking wet. … I tugged at the cloth, which was caught under what was left of a long wooden beam … I pulled harder on the silk, and the blackened beam lifted and tumbled off to one side. I loosed a scream and dropped the fabric.”

Considered just another old barn fire set by kids playing with matches, and written off by the sheriffs of two counties overlapping the farm, Ellie discovers and solves the murders of a small man and a redheaded woman all but unrecognizable as victims. Ziskin is the master of suspense, clean and unsuspected surprises pop up throughout his narratives. What one might have thought, coming as close as 10 pages from the ending, will likely make a fool out of any schooled, well-read logic.

Don’t miss A Stone’s Throw, an original paperback from Amherst, N.Y.-based Seventh Street Books, which will be released today, June 5. With Maria’s 15 percent discount for “Murder Ink” books, you can’t have lunch downtown for what this book will cost you. You’ll forget lunch before you get home; you won’t forget Ellie Stone.