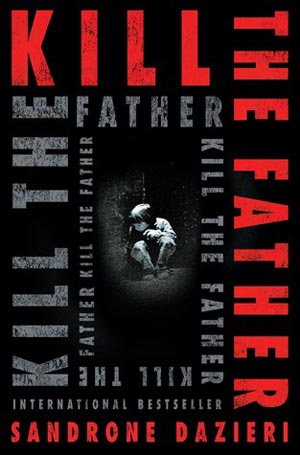 If you want to study how a novel is written, look no further than Italian newcomer Sandrone Dazieri. His cloth-covered American debut, Kill the Father, is impeccable, from the buildup of characters and place to the crisp narrative. He makes tension with a single word, subtle body gesture, breath of exasperation or malevolent eye contact, and any and all vexations go from bad to worse to grave.

First off, let’s dispense with the implications of the poorly chosen title. Kill the Father has nothing to do with patricide. In fact, there is no father of anybody in this terrific story. The father is the nom de guerre of an unknown, unseen man who kidnapped 6-year-old Dante Torre more than 20 years ago and kept him confined in a concrete silo for 11 years. The kidnapping was a bizarre attempt at mind control being conducted on an international scale with orphans. (Richard Condon’s 1959 book Manchurian Candidate fictionalized these experiments.) Dazieri brings the abomination down to earth with the rococo fiction of one evil man, one grown childhood victim of crate training now coping with the fear of confined places as well as open space, and one fragile female Deputy Captain Columba Caselli.

The story goes something like this: Caselli is asked to return prematurely from medical leave consequent to an unnamed bloody “disaster” to assist in the investigation of a decapitated woman, and her missing 6-year-old son. (The crime is similar to Dante’s 20 years ago, in that both mothers were gruesomely killed.) After an immediate arrest of the husband of the slain wife for her murder, and the suspected murder and disposal of their child, Caselli isn’t satisfied with the easy conclusion. She suspects that the murder was intentionally horrid to avert attention away from the abduction of the 6-year-old. As evidence, she cites the decades-old case of Dante, which embarrassed Italian police who wrongly presumed that the boy was taken, killed and disposed of.

Policewomen are chronically under-appreciated in the man’s world of crime fighting. And from whatever ‘‘disaster’’ Caselli was damaged, a covert ridicule festers among her fellow officers. Her insistence to expand the scope of the investigation in the missing boy is seen as simply another fantasy of hers.

But, with the plucky verve that lady detectives exhibit in fiction, Caselli snoops out and contrives a visit with the reclusive, agoraphobic Dante Torre to help her profile someone she believes kidnapped the child. Their exploits are sensitive and brilliantly woven; their complicated characters are fleshed with compassion; and their antagonist shapes up impossibly after all these years as Dante’s tormentor – The Father.

This is a drama as only a histrionic Italian can tell it. Italian mystery writers have always contributed the gilding to the noir fiction genre, such as themost famous and fabulous Andrea Camilleri as well as luminaries Antonio Tabucchi, Gianrico Carofiglio and Massimo Carlotto – all reviewed in “Murder Ink.” And now we have Dazieri. Do not pass this one up; it’s a terrific crime drama by a sensational new Italian voice first translated into English.