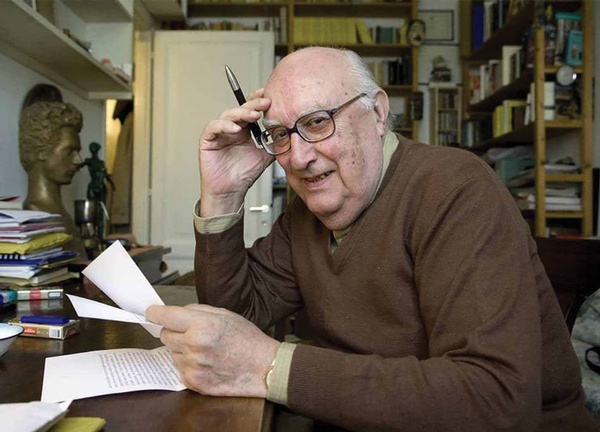 In the world of crime fiction, a few, not many, invented characters have risen to legendary status. We could list the dozen or so that have become celebrities as if they were real: Dick Tracy, created by Chester Gould; Agatha Christie’s Hercule Poirot; Sir Arthur Conan Doyle’s Sherlock Holmes; Lisbeth Salander created famously by the Stieg Larsson in his breakthrough Girl with the Dragon Tattoo; and even television’s Joe Mannix, created without my permission by Richard Levinson.

The most distinctive of all fictional police detectives is a character largely undiscovered by the majority of even the most dedicated crime fiction readers. He was created by an Italian playwright and professor of film direction from Porto Empedocle, Girgenti, Sicily. In 1994, Andrea Camilleri brought into the world Inspector Salvo Montalbano, chief of the fictional Sicilian town of Vigàta.

Camilleri has written 27 of the Montalbano novels beginning in 1994 with La Forma Dell’Acqua. This was translated into English in 2002 by the prodigiously gifted Stephen Sartarelli, of New York University, with a title you may be more familiar with, The Shape of Water, which was published by Viking Press. Sartarelli went on to translate all of Camilleri’s Montalbano mysteries and, in my opinion, elevated Camilleri’s succinct, zany yet intricate crime solving to a level many translators could not have achieved just as most mystery writers are unable to create. Camilleri won the most distinguished compliment in the crime fiction genre in 2012 with the Crime Writer’s Association International Dagger Award.

Camilleri was born in 1925 and died at the age of 93  in 2019. The Cook of the Halcyon is Camilleri’s penultimate book, reworked from a shelved screenplay by Sartarelli and published this past March by Penguin Books. I’ve been promised that one more Montalbano book is due for release next month, and then the mystery world is back to its various mirror images and 500-page struggles.

I’m mourning the loss of Camilleri because of the loss of Montalbano. I’m losing somebody I know well and admire. And I’m already feeling deprived of impeccable, funny, sexy, honest crime fighting by real people, and narrative uncomplicated by flashbacks and multiple narrators, and circumstances made all the more real by Sicilians of big gestures and sentimental hearts.

Camilleri has referred to Montalbano as a “serial killer of characters” – meaning Montalbano has developed a life of his own and demands great attention from his author, to the demise of other potential books and fully formed protagonists. Camilleri adds that he wrote a Montalbano novel every so often just so the character would be appeased and quieted so he could work on other stories.

The Cook of the Halcyon is not one of Camilleri’s best stories, and I suspect Sartarelli had a heavy hand cobbling it together in Italian and then in English. But Camilleri’s stories are eclipsed by his characters and quirky criminal goings-on that Montalbano exposes and extinguishes so cleverly. I’ve read every one of Camilleri’s books, and I have a farrago of stories but clear pictures of the Vigàta police station and Montalbano’s lieutenants, Inspector Mimi Augello and Fazio, and desk sergeant Catarella. And Montalbano’s housekeeper Adelina who leaves Salvo an elaborate dinner in the oven for him every night, and longtime inamorata Livia Burlando who lives a plane ride away, and Nocolò Zito who’s Montalbano’s sometime abettor as director of the Free Channel television station. These are recurring characters in all of Camilleri’s books, and we grow to love them and depend on them. It’s the Montalbano family we come to know, not the unpretentious stories in which they perform.

So one day in Vigàta’s harbor comes the grand yacht Halcyon, flying a Bolivian flag and with nobody aboard but the captain and a dead man.

Preceding the Halcyon’s arrival, the ne’er-do-well son of a recently deceased shipbuilder employing 200 Vigàtans, Giovanni Trincanato, is gallivanting around with an imported, lightly clad consort in an expensive Italian sports car. It is mere hours after one of the remaining factory workers, Carmine Spagnolo, has hanged himself from a beam at the shipyard.

Then Inspectors Fazio and Augello get transfer papers, and Montalbano is ordered to take his 30 days of stored-up vacation, beginning at the moment of the phone call from Montelusa Central Police headquarters.

These are the kinds of madcap things Camilleri throws in the way of Montalbano, but nothing gets investigated until after he has had lunch. And in Camilleri’s books, food is the coin of the realm, to the point that a dozen or more cookbooks have been written with recipes for Sicilian dishes Salvo Montalbano relishes.

That’s all you need to know. I haven’t reviewed a Camilleri book before, I’ll confess. I’ve only lent his books to friends; I’ve always felt that he’s mine, all mine alone. But now that he’s about to be relegated to history, I’m sharing.

Don’t forget to ask Maria’s Bookshop for your 15% Murder Ink discount. This is a $16 paperback; you can’t even eat a cheap lunch for less.