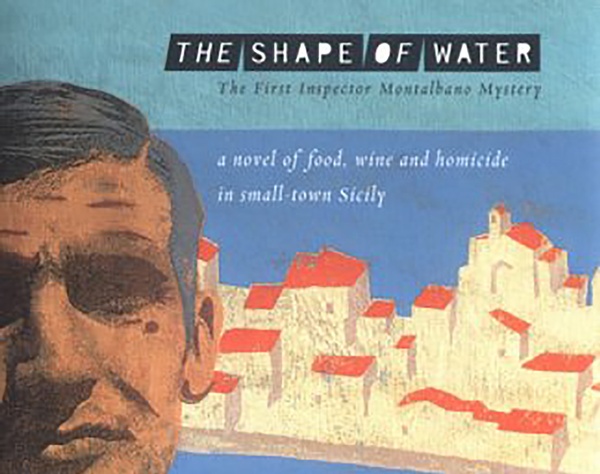 Published in Italy in 1994 and translated into English in 2002, “The Shape of Water” is Andrea Camilleri’s first in a number of Sicilian crime novels featuring the fractious chief of police Salvo Montalbano – an Inspector Jacques Clouseau before the unfortunate dementia.

This isn’t where you have to start, and none of Camilleri’s books are sequels. But after you read one Camilleri book, you’ll want to read another, and you might as well start at the beginning. These are bedtime stories. They’re sweet, sublimely humorous, soothing and relaxing in the unique way Sicilians relax. Montalbano alone is such superb characterization – having been faithfully drawn by Camilleri in 28 books – he is lovable. You want to have him to your dinner parties and introduce him to your father, but not your mother or sister. He is at once brilliant and charming, spirited and coy and devious. Flirtatious by nature, but easily overstimulated and flustered at the sight of beautiful women, who just happen to cling to him with a variety of intentions.

Montalbano is the mustachioed leader of the police department in the second-tier fictional Sicilian seaside town of Vigàta. If Sicily is like its reputation and the way Camilleri portrays it, graft is endemic in everyday life for everybody. Being a chief of police in a Sicilian town is dicey business. Montalbano knows the rules: throw the little fish back; don’t sweat the small corruptions and revenge killings; get down with the homies; and let the big sharks set their own nets in which to get caught.

We are first introduced to Montalbano after the unfortunate death of a prominent engineer and politico, found in a most undistinguished state in his luxury car at the infamous Pasture, with his pants down to his ankles. That he should be with a woman other than his wife can be overlooked, but to die in flagrante of such ignoble circumstances is scandalous. While natural causes is the official and politically correct decree, this is far too mortifying not to look further into the odious circumstances. Quite a mystery ensues.

Camilleri was born in 1925 in Porto Empedocle, Sicily, Italy, and died at the age of 93 in 2019, leaving a finished book, “Riccardino,” with his publisher and instructions not to release it until his death. More than 10 million Camilleri Montalbano mysteries have been sold, with English translations brilliantly interpreted by Stephen Sartarelli beginning in 2005.

Camilleri’s career was primarily as a writer, director of theater plays and cobbler of a couple of undistinguished novels before he began reading the great Georges Simenon’s politically loaded crime fiction. He was so impressed with Simenon – and so angry at the Italian mob, Sicilian culture and the disarray of the government of Silvio Berlusconi – Camilleri began his Montalbano novels to poke fun at Sicily’s thugs and politics with trenchant humor.

I own all of Camilleri’s books, and if my house burned, I would save other books first but mourn the loss of Inspector Salvo Montalbano and the poetic writing of Camilleri. I’d replace every book immediately. These books are to be treasured. Montalbano should be the template for every real and fictional detective and present politician, and Sartarelli should be the model for translation artistry.

Go to Maria’s Bookshop, pop for 16 bucks, ask for your 15% Murder Ink discount and take any Camilleri book in stock. Then write me a thank-you note.