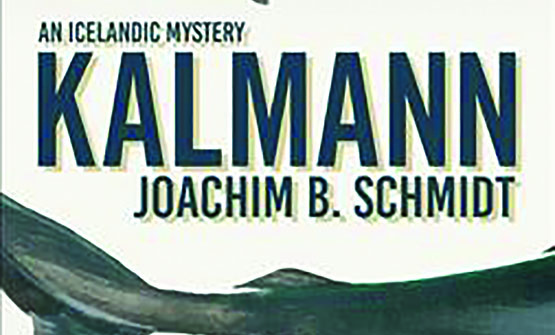 Kalmann Ódinsson is a 34-year-old simpleton living independently in a small settlement in a remote northern area of Iceland. He’s the self-appointed sheriff of Raufarhöfn on the snowy hinterland of the Melrakkaslétta, about 1,000 miles from Reykjavík, where half of Iceland lives. Kalmann is a hunter and shark catcher when he’s not patrolling his hamlet, same as his beloved and legendary grandfather who taught him.

You’ll have to forgive the simpleton label, but a more sensitive portrait of Kalmann’s cast of mind would be unkind. “Kalmann: An Icelandic Mystery” is a story about Kalmann and is written in the first person, often oblivious of the harsh light of what others think of his nonconformities.

Let’s let Kalmann explain, and you’ll at once forgive the characterization:

“I wondered how things would be for me if I reached Grandfather’s age. Because things with me had never really gone forwards. They suspected that the wheels in my head ran backwards. That happened sometimes. Or that I’d never progressed beyond the level of a six-year-old. I wasn’t fussed. Or that my head contains nothing but fish soup, or that It’s hollow, like a buoy. Or that my wires aren’t connected properly. Or that I have the IQ of a sheep. ‘Run Forest, run!’ they used to shout during sport lessons, laughing themselves silly. That’s from this movie where the hero is mentally disabled but can run fast and play ping-pong well. … I can’t run fast, I can’t play ping-pong, and back then I didn’t even know what an IQ was. Grandfather knew, but he said it was just a number used to separate people into black and white, a unit of measurement like time or money, a capitalist invention even though we’re all equal, and then I lost track of what he was saying, and Grandfather explained that only Today counts, the Here, the Now. Me, here with him. Nothing more. I understood that.”

To embrace Kalmann to the full extent of his simple mindedness in Joachim B. Schmidt’s distinctly Nordic noir, you should read mysteries written by Iceland’s quintessential literary luminary, Arnaldur Indridason. Hit up the library for “Silence of the Grave” and “Jar City.” Your reading life will never be the same if you read these two novels. And as much as Indridason has raised the bar of crime fiction to genuine literature, Schmidt has reached deeper into the soul of the Arctic stoic with his character study of Kalmann.

It happens that Ms. Hafdís, the high school principal and town councilwoman, asked Kalmann if he’d do his community the service of hunting and killing an Arctic fox who had been skulking around town in search of food. Himself sworn to the sanctity of sheriff, Kalmann set off into the tundra to track down and shoot the fox he knew as Schwarzkopf with his distinctive blue-hued fur. On his trek into the frozen Arctic, Kalmann came upon a pool of blood after losing his balance in the deep snow and falling hands first into the blood. He went back to town and visited Ms. Hafdís to report not having shot Schwarzkopf. Standing before Ms. Hafdís, Kalmann had bloody hands and sleeves, and herein begins the investigation of what happened to missing person Róbert McKenzie, who simply vanished some weeks before.

Before long, Kalmann is being interviewed by Detective Birna of the criminal police department of Reykjavík, and before much longer the investigation of Róbert McKenzie has been staffed by a cohort of forensic investigators swirling around Kalmann. That puts us on page 45 and anything more I tell you about “Kalmann” the book or Kalmann the simpleton is a plot spoiler.

Surely I shouldn’t have to convince you of the value of a $17 treasure, and don’t forget your 15% Murder Ink discount from Maria’s Bookshop.