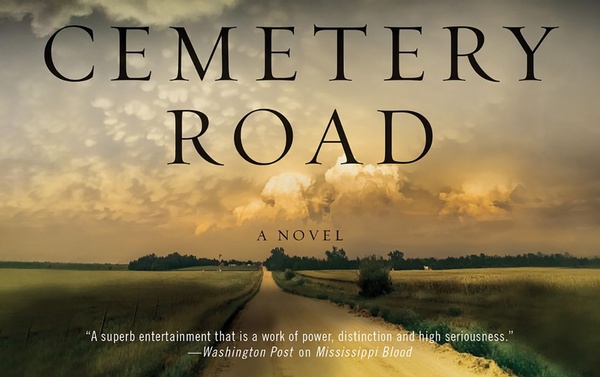 It’s going to cost you five cents a page to read Greg Iles’ 590-page cloth-bound Cemetery Road, released a month ago today. But when you figure it costs 27 cents a cigarette, five bucks for a rolled joint and $6 for a glass of wine, a nickel a page for Iles’ big-screen doorstop will be a bargain if you’re looking for some time off from the bewildering state of world affairs. Cemetery Road is a luscious story built by a writer who knows how to use the English language.

Cemetery Road is indeed a road in Iles’ story, so you needn’t anticipate anything distasteful, and it doesn’t matter why it’s called that. Iles’ characters are as real as the life we never notice around ourselves for the constant chatter in our heads, and his tableaux will leave you breathless.

Iles is from Mississippi, and his stories are rooted in that part of the country. It is a region proud of its generations of benighted, particular and dissolute adults who believe the South got the best of the War Between the States. It believes laws are made to delineate a place for minorities, women and the underclasses, same as always. And the men, the owners of the black sedans, the men of bespoke suits, manicured nails and shirts that need cufflinks and starch, they’re the arbiters of society. In New York City or Chicago, the men of personage in Bienville, Miss., would be called mobsters. In the town that Marshall McEwan couldn’t wait to vacate when he came of age, they are the glorified men of The Poker Club. They meet often as a hierarchical coterie to drink whisky, smoke cigars and talk investments. Between the half dozen of them, they own everything but what they don’t want. They carry on with tradition: patronage, lending, taking what they want and prevaricating. You wouldn’t want to know these men, but if you lived in the South, you would.

It’s the men of The Poker Club who welcome home Marshall after 35 years gone. An internationally celebrated journalist in Washington, D.C., Marshall puts his career on hold to assist his mother with the failing health of the father, whose mien mirrored his reputation as a fourth-generation newspaperman. He was the publisher of the legendary Bienville Watchman, known as the “Conscience of Mississippi.” To Marshall, Duncan McEwan was too grandiose to be much of a father. So it’s with a wince of resignation that Marshall comes home to close down the wheezing, century-old newspaper and stand by his mother to wait to bury the flag bearer of a small, delusional, backwater Southern town.

And then, Marshall’s boyhood mentor, archaeologist Buck Ferris, is murdered at the river’s edge where The Poker Club grandees are in negotiation with the Chinese to rebuild a paper mill. Everybody knows that Buck had found ancient Indian bones at the site. It’s unspoken that the Chinese are too concerned with a low-profile deal to spend too much money they’ll be helped to repatriate by The Poker Club chums who have a big score hovering. It seems, though, that nobody told the unctuous profiteers that you never, ever pick a fight with a man who buys ink by the barrel.

What transpires after Buck’s murder is the genius of Iles and the reason to read Cemetery Road. This is a rich, textured story of the South and the lives of people who might as well be from Palermo, Sicily. Cemetery Road is the cheapest high you can get.

And before we leave this go round, you mustn’t overlook the April 2 release of Mark Bowden’s The Last Stone from Grove Atlantic. This is a dizzying example of narrative nonfiction, and Bowden has to be the leading practitioner. It recounts the kidnapping of the preteen Lyon sisters from the Wheaton Plaza shopping mall in suburban Washington, D.C., in 1975 as a cold case investigation 40 years later. The Last Stone absolutely deserves the cost of a hardback, and it’s a good bet that you’ll buy another copy to gift a friend who relishes a one-in-a-hundred story.