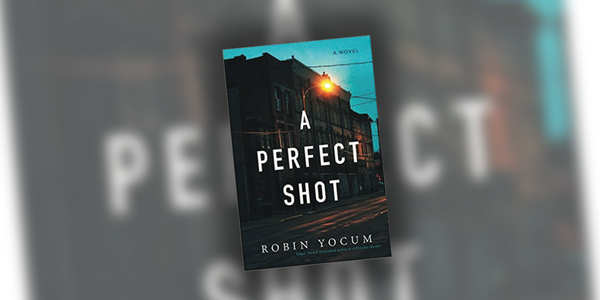 No author would like to hear it, and publishers are loathe to admit it, but the book-selling business is held aloft by midlist titles from journeymen authors. Never the bestsellers raking in the millions, midlist books keep the office rent paid, editors employed and reputations elevated with potential to snag or luck into the next prize winner and franchise player. Everybody is gambling; everybody is guessing. Hope is the currency keeping the competition alive for us the readers to bring in the win or kill off the bet.

“Murder Ink” has had a remarkable history of picking the meteoric mysteries – the advance reader copies sent to book reviewers months before publication – but most of the good reading comes from the midlist novels in between. These are the bench players, with all the skills to make the big leagues, and the go-to position players who hold the team together and, on occasion, show a talent worthy of celebrity. Robin Yocum is such a midlist author of very finely crafted crime fiction for Seventh Street Books in Amherst, N.Y., one of the top crime fiction publishers with perhaps the best midlist in the business. Yocum’s A Brilliant Death was an Edgar Award finalist in 2017, and he has a host of notable mentions from various publications and organizations in his native Ohio. There he was a crime and investigative reporter for the Columbus Dispatch for a decade before opening his own public relations firm in his hometown of Westerville, Ohio. He’s not schmoozing the literati crowd in New York or working the cadre of literary agents for better position and bigger advances. He’s home in Ohio working a day job and writing at night and on the weekends, and apologizing for being a part-time husband and father. But he’s producing excellent work, and A Perfect Shot is yet another gem of a story well told.

After some 20 years, Nicholas “Duke” Ducheski is still the most celebrated man in the eastern Ohio steel town of Mingo Junction. His winning shot, made in a tie basketball game with five seconds on the clock in the 1971 high school state championships when he was 18, still outranks anything anyone has accomplished in this Ohio River Valley community. Now age 40 and working in the steel mills, The Duke of Mingo Junction wants more from life than a dismal marriage and a miserable job and a moldy reputation for throwing a ball up in the air. Duke opens Duke’s Place, “a real restaurant with a nice menu and cloth napkins.” And that draws in his brother-in-law, Tony DeMarco, an enforcer for Salvatore Antonelli who controls the drugs, prostitution, numbers and loan-sharking in a large swath of southern

Ohio and northwest West Virginia. Tony wants Duke to handle betting slips and to make Duke’s Place a front for his move to take over from Antonelli. And to prove that he’s sincere and is not to be simply taken as his wife’s unexplainably rich brother, he brutalizes Duke’s manager and oldest friend, Moonie, and leaves him to be found by Duke the next day in unspeakably dead condition.

The good guys always win, don’t they? Just barely most of the time, but The Duke of Mingo Junction is the best of the good guys. And just like that jump shot from the corner back in Columbus in 1971, Ducheski sees the play he has to make and hears the hush before he edges toward the corner for a shot more unlikely than his jumper in 1971.

A Perfect Shot is a trade paperback, and with Maria’s 15 percent discount for “Murder Ink” books, it’ll will cost you less than lunch at Olde Tymer’s Cafe?. Brown-bag a sandwich this week and buy this delicious story that may just be the 2018 Edgar Award winner. If this isn’t one of the better books you’ll read this year, I’ll buy lunch