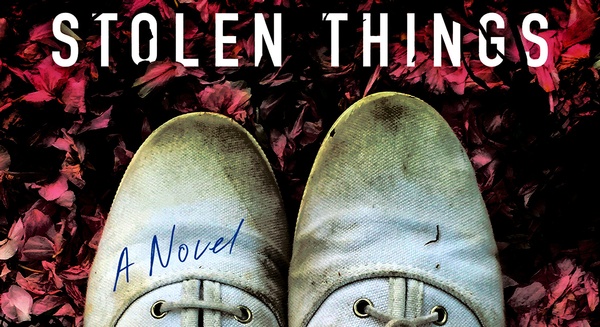 It’s always exciting to come across a debut novelist with a quality book to show for all the anxiety and waves of incredulity that go into such an audacious act of actually writing a book. Writing a book – especially a book of fiction that depends on making up a long story with believable characters and a beginning, middle and end – is at once cathartic and terrifying. Like the standup comic “whose monstrous ego is matched only by the abject conviction that he stinks,” writing for others has the specter of always being a step away from ignominious failure. And the freshman novelist must be rhapsodized if she can illuminate a path through a dark sky that was a moment before nothing.

R.H. Herron offers up such a beacon in Stolen Things, published valiantly by the Dutton imprin of Penguin Random House in August. We follow the frenzied panic of a veteran 911 dispatcher when she hears her teen-aged daughter begging for help on the other end of an emergency call. After 20 years on the job, Laurie Ahmadi had heard every conceivable life crisis, counseling victims to keep them alive, giving instructions to deliver babies, stop bleeding, hide from drunken husbands after Super Bowls and diagnose drug overdoses, and comforted mothers of lost children. Nothing surprised Laurie until hearing the hysterical voice of her disoriented, insensible daughter on the phone just before her shift ended – “Mama? Help me.”

An adrenaline junky and a veteran of crisis management, Laurie ignores her chest pain and goes to work. She teases out that Jojo, her daughter, is on a mattress in a pitch-black room, barely able to coordinate her body enough to fish out her mobile phone from her back pocket to make the call.

You can imagine the panic in dispatch, then the police department. Laurie coaches her delirious daughter into turning on her phone’s location services and badgers her to talk about how she got to where she was and what she knows about where she is while the radio signals cross-reference her phone’s approximate GPS coordinates.

“Turn on the phone’s flashlight for me, OK? While you’re doing that, I’m sending a bunch of guys in your direction, and they’re driving as fast as they can. You tell me when you hear a siren, all right? Listen for me, baby.”

Laurie takes off in search of her daughter as the police become uncharacteristically clumsy in efforts to find the daughter of one of their own. What’s going on? Something isn’t right. Instinct is making an appearance. Trust in the system takes flight.

Laurie tears out of the parking garage in pursuit of the phone signal. She finds Jojo in a vacant apartment. She’s been mauled sexually and doesn’t remember how she ended up at the home of Kevin Leeds, Laurie’s friend and a pro football player known for his work with Citizens Against Police Brutality. Kevin isn’t there. Jojo swears he didn’t do this to her. There’s a dead man in the closet, and none of the swat boys seem to want to interview the damaged teen as they send out APBs on big Kevin. This could be a career maker for cops if Kevin, a black man, is found guilty or if he resists arrest with the slightest argument.

You see where this is going? The police badge is protection from the same vigorous scrutiny the badge indulges others in, and what Laurie discovers is a sex trafficking sideshow behind the thin blue line. Stolen Things is fashioned from a true story author Herron, a former dispatcher herself, followed when she was first learning the trade. It burned a hole in her and finally forced her, 20 years later, to write about it knowing she would lose all her friends and put herself at risk over a mostly made-up narrative. And here it is; the story must have poured from her, and she was up to the challenge of writing well. Having the badge is power, and absolute power corrupts absolutely, except when it doesn’t. It’s like Russian roulette, absolutely predictable if it’s played recurrently.

This book needs to be widely read. It’s an exhilarating ride as well as an experience of unexamined hierarchies and woebegone oversight. Stolen Things is in paperback at Maria’s Bookshop, with a 15 percent discount if you mention “Murder Ink.” It’s the cost of a hamburger and you will have made a healthier investment in your future.