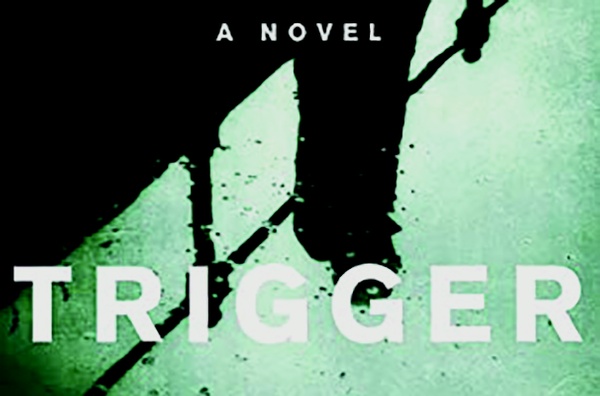 I’ve got a real sleeper for you in this month’s “Murder Ink.” If you’ve become an aficionado of what can arguably be called “literary” crime fiction – the fare offered exclusively in “Murder Ink” columns – Trigger, David Swinson’s new book to be released by Mulholland Books on Feb. 12, will be below your standards, at least for the first 50 pages or so. After which it will be like straightening out the cut lines and nibbling the rest of the lemon merengue pie at three o’clock in the morning.

Frank Marr is Swinson’s unreliable Washington, D.C., ex-cop who, like most ex-cops,
lied and cheated, planted and stole evidence, drank and used on the job, and basically did what every cop on a metropolitan police department does until younger, coming-dirty cops move them over and out. And ex-cop is not to be confused with a retired police officer; the ex-cop has been effectually fired. Now Frank is a PI with no manual of standards, no wife or pets or clean suits, socks or underwear. And he’s found his place in the swamp without having to worry who’s sniffing the reek off his unwashed disinclination. Frank’s been shelled out. All former career police detectives are burnt toast. Who can live that kind of life – on the streets, with a badge attitude, gun and predilection to get even – and then go into retirement tending a flower garden and feeding hummingbirds? It doesn’t end that way for those guys.

Problem is, Frank’s so corroded from so many years of being a bargain basement cop under a tower of bespoke D.C. criminals that he almost forgot that he’s a nice guy. So when his partner of many years is benched and being investigated by internal affairs for putting too many bullets into a black youth who was found to have no weapon, Frank finds renewed purpose. He will not, under any circumstances, do even one line of coke until he finds out what happened to the gun his partner supposedly used to shoot the kid 18 times over. And to help him, Frank conscripts Calvin, a black street punk he’s been arresting every year or more since he’s been 14 years old. They make quite a pair, each testing the other, both rising to the occasion and making a crime-fighting duo that is sure to be repeated and copied.

Trigger (too bad about the title; it’s apropos of absolutely nothing and is reminding of a horse) is a hardboiled, inner-city pulp procedural that went the way of vinyl records. The style is simplistic, dusty and monochromatic. And to add to the grainy black-and-white imagery is Swinson’s own D.C. cop background: 16 years, an upstream swim for writing an actual novel. After only six pages, I set the cop jive down, but I left my bookmark in place. Then, after reading two other books, I went back to Swinson’s Trigger just for a dose of urban absurdity for an evening (I was raised in New York City). Within an hour, I was on those D.C. corners and alleys with Frank and Calvin, lying their way to leads on what happened to the perp’s gun, leads like snakes that all bite or sting or kill.

This is very good inner-city street drama with no trace of a writer trying to construct overwrought sentences, the kind that Terry Gross would highlight in the interview Swinson won’t be getting. You’ve got a few days before Trigger (the book) is available in hardback at Maria’s Bookshop (which will give you the 15 percent “Murder Ink” discount.) Go in with somebody and each buy half with the fastest reader going first. It’s not a book you’ll read again, so think of a timeshare. You’ll like this book, damn the name