All together now
Building a music community takes a village 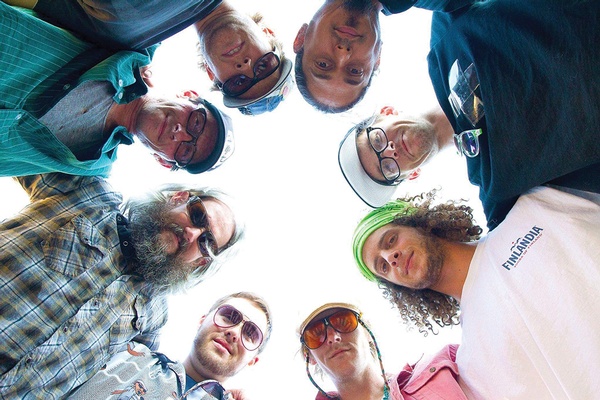 When it comes to music, there are two driving forces that keep me coming back. One, brewing the creative stew while composing with bandmates, and two, experiencing that music in a live setting and building energy in the room with the crowd.

Garett Dickinson, formerly of local hip-hop act Diabolical Sound Platoon, sat down with me to talk about his highs, lows, influences and philosophy on creating powerful tunes as well as an inclusive and welcoming space for viewers.

Dickinson grew up in Durango and described his search for connection and identity through the creative process. In his youth, Dickinson was hungry for an engaging music scene, and in high school, his dear friend Sam Redman’s older brother started passing down rock ’n’ roll classics. This sparked a drive in Dickinson, and he began lingering outside of venues and bars, hoping to get a taste, or at least a glimpse, of the magic on stage.

Eventually, Dickinson started sneaking into venues in the early afternoon before the shows that night. Once in, he and his friends would sit in a poorly lit corner drinking water, or soda if they had money and try not to attract attention to themselves. Once the party started, they felt safe enough to stay under the radar and soak up the glory of live music.

Once in college, having developed his taste in music as well as new schemes to enter shows, it became easier to participate in the music scene. He reflected fondly on seeing local punk acts such as The 13’s, Freeman Social and Smut Vendor. “If it wasn’t punk it wasn’t music!” Dickinson said with a rebel smile.

While punk and rock ’n’ roll fostered Dickinson’s musical upbringing, he started to notice similarities in potent lyricism across genres. “I want intentionality in lyrics, and the quality of lyricism looked the same in hip-hop and punk,” he said.

In the early 2000s, Dickinson started working on lyrics and song concepts with Redman. In 2005, both joined Diabolical Sound Platoon. Since groundwork for the group had already been established, the two new members jumped in hot and heavy, and the engine of the band was rocking full steam ahead. “We found that the scene was real accepting of hip-hop once we leveled up and took ourselves more seriously,” Dickinson said.

The group would mostly play punk shows since these were the only ones available and accepting. Dickinson appreciated the inclusion into the scene. “It was a window where it didn’t matter if you were hip-hop kid or a mandolin player for a local bluegrass group. Together, we make the scene better by cultivation, connection and education,” he said.

He added that a thriving scene consists of people from all walks of life, giving people the opportunity to learn from one another. “Counter culture is made from real stories, and if we really embraced that, we would connect with people who may be opposite of us,” Dickinson said. “If we can suspend the need to be validated by being right, and be vulnerable … then we can expand with an open mind.”

Dickinson played alongside upwards of 30 members in DSP during his 11 years with the group, the core members being Ben Fisher, Jon Hunt and Redman. Over the time Dickinson was involved, they opened shows for big-time acts such as Living Legends, Sunspot Jones and The Coup. After a heyday for DSP, however, he noticed a trend of dwindling music venues, in downtown Durango, with many building and business owners looking for the cheapest acts to provide live music, which mostly consisted of college DJs.

Perhaps some potency was lost, but Dickinson thinks the scene is reviving. “It has been renaissance time, and now we get to see the work people have been putting in,” Dickinson said.

Of course, any art form progresses through participation, so get yourself into an alternative music show. Engage with artists, ask about their process and support those who contribute to the scene. This is how we excel and promote our friends, community and local counterculture.

One upcoming chance to do this is at The Hive, which has two upcoming shows. On Sat., Dec. 18, Tractor and the Dirt Bags will offer up a night of jammin’ blues rock,with dusty guitar licks sure to get yer boots stomping. Then, on Thurs., Dec. 23, The Hive hosts Festivus for the Rest Of Us! with music from local bands Canceled and The Icks. They will be joined by New Mexico shredders Scarlet Night and the Mommy Milkers. Expect a night of power chords, spleen bursting drums, fiery lyrics and a mosh pit that will warm your heart this holiday season.