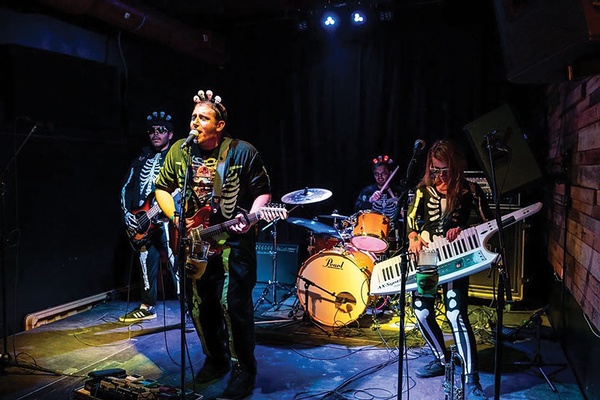 Then I Fly brings its high-energy sound to The Hive on April 27./ Courtesy photo

A welcoming sense of home is something some are born into or have to create for themselves. The Dutch have a term for that cozy and relaxed state experienced among dear friends and family, the sense of immersed belonging – “gezellig.”

For me, the music scene opened the door to a sense of community, with house shows on full volume – an unruly electric frenzy with drums and stomping feet shaking family photos off the wall. For some, a group of friends or a subculture can be the truest form of family and gezellig.

I spoke with Denver-based ska/punk band Then I Fly about when they first felt at home in the music scene. Cody Smith, who founded the band in 2006 in Ohio and now is the lead singer and guitar player, said it took some time to get in the groove.

“It took years to feel at ‘home’ in the music scene,” Smith said. “I grew up in a small town in Ohio where a music scene didn’t really exist.”

Smith’s musical journey started at a young age. “We first got together for a high school class project. We made a terrible metal song about social events. All I remember is the line, ‘I smoked but I didn’t inhale,’” Smith chuckled. “We were idiots. But that same group would go on to become the band we are today.”

Eventually, after years of co-creating and exploring, Smith relocated the band to Colorado. It was here, after playing music with similar bands for several years, that he finally felt a sense of belonging. “I think it really started hitting home when we were starting to be asked to play shows with our friends’ bands,” he said. “We have some amazingly talented friends.”

Smith said music helps bring people together, allowing friendships, ideas and emotions to be developed and shared. “If it wasn’t for our music community, I don’t think I would still be playing music live at almost 33 years old,” Smith said. “I also don’t know what I would do without it.”

Anastasia Canfield, aka Anastasia Rose, joined Then I Fly in 2018 to play a myriad of instruments, including trumpet, keytar, backup vocals, accordion and auxiliary percussion. Rose said her childhood was rich with music.

“I’m a classically trained pianist and horn player,” she said. “Music has been a part of my life since I was a little girl, and I made up nonsense songs about things around my house when I could barely walk and talk. My mother is an artist and pianist, so she began teaching me piano before I can remember. I started formal lessons at about 8, and the rest is history.”

For Rose, music is the channel that brings creates community. “I feel like I have always been home with music as my proverbial community,” she said. “I grew up in Texas and traveled all over the country performing, and I always had a community because I was involved with music.”

She moved to Colorado in 2013 to get a master’s degree and is involved in several projects along with Then I Fly, which was one of her first bands.

Gab Kaplan, who has played with Durango-based groups Profetic Calaveras and Military Wife, joined Then I Fly recently to play bass on the upcoming tour. Kaplan said growing up with music fueled the drive to pull more people into the craft. “Raised with music in my bloodlines and New York City in my back yard, I was able to feel at home in the scene pretty early on,” Kaplan said. “When I was in high school, the musicians I looked up to were mostly my older friends who were further established in the scene than I was. Luckily, those people looked right back at me and welcomed me with open arms and encouragement.”

The music scene has always allowed him to feel seen in a world where he usually feels invisible. “That feels like home to me. I hope to help other people feel seen and at home through music,” he said.

It takes us all to create this feeling of gezellig, and in that space we can grow as individuals. Come warm up to the communal fire Wed., April 27, at 7:30 p.m. at The Hive, located at 1150 Main Ave. right here in cozy Durango. Let’s feel the glow together and welcome each other home through music and the arts.