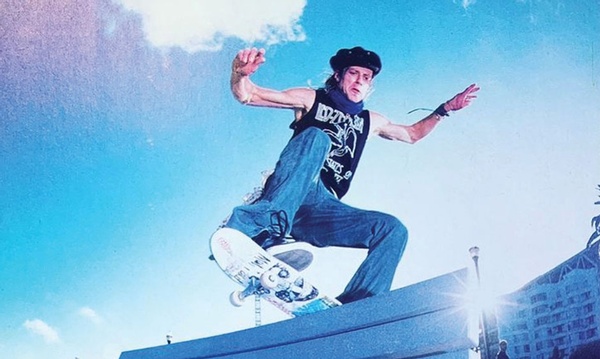 Skateboarding has been a constant influence on the art and music I often enjoy. I remember thumbing through the back of a Thrasher magazine to find new album releases and pausing the credits of a skateboarding video to seek out the song from a specific part. Rock ’n’ roll fused with skateboarding gave an extra raw and fast-wheelin’ explosive energy that captivated me as a youth and to this day.

I found myself immersed in what was seen by my parents as “aggressive music.” With a love of the radical art found on skateboards and on the cover of albums, I would try to reproduce skate logos and art at home in my bedroom in the basement, along to music booming with electric guitars and pounding drums. Some of my favorite shows that I’ve played have been for skateboarding events. There is something so fueling in playing on the edge of a 6-foot quarter pipe, screaming all my feelings into a microphone and having a skateboarder slash a grind going Mach 10 and nearly missing the microphone stand.

The energy of the skaters increases, which in turn energizes the performers, further solidifying the relationship between viewer and musician. When these lightning forces are paired, it creates a firework display of talent and motion.

Recently, I had the opportunity to meet with Kevin Marks, director of Look Back Library, a nonprofit organization dedicated to preserving the history of skateboard magazines. Marks lives in San Diego but was in town to set up a skateboarding magazine library at The Hive.

Marks’ love for skateboarding started in 1986 as a youth in Wichita, Kan., after watching the newly released “Back to the Future” movie. At the time in Kansas, the skate scene was in its infancy, and Marks was thirsty for skateboard knowledge. Because of his isolation, he found a bond with skateboarding outside of his town through magazines.

“My love for mags flourished,” Marks said. “I found a connection to the greater world of skateboarding – this activity I was quickly falling in love with.”

Through the magazines, Marks was able to “learn the nuances of skateboarding” through carefully analyzing sequenced skate trick photos. But work still had to be done to create a skate scene locally. So Marks and his few skate buddies started building ramps, modeling them after the ramps shown in the magazines. Music quickly became part of the work, too, with the crew getting together for “ramp jams.”

“Friends would bring their tapes, and I would bring mine; we’d share and expose each other to new music while skating,” Marks said. “The music gave the aggressive edge to put your fears at bay to try something new on the ramp. We’d go to the ramp and throw on that Metallica tape and get pumped!”

Skateboarding and music has cultivated wanderlust and passion for Marks’ work now. In 2015, Marks was asked by the founder of Launch, an indoor skatepark and community center in Fort Collins, to join its Board of Directors.

“Launch already had an extensive library of skate mags, and it became my pet project to build up and fill in the holes of this collection,” he said.

Months into this project, Marks, now 50, asked himself, “Wouldn’t it be cool if all skate shops had their own libraries?” Upon some self-reflection, Marks began to make this goal a reality and has since curated more than 150 libraries, including 10 overseas. He has also worked with the Skateboarding Hall of Fame and Museum, as well as a number of skate shops that foster the love for the preservation of skateboarding history, including Cowtown, Cardinal, Jokers, KCDC and others.

With many magazines going out of print and moving into the digital age, it has become Marks’ mission to protect and archive this faltering media platform.

“Will all of this be forgotten?” Marks has asked himself. “I look at this work as promoting print. I want to share this knowledge with other skate nerds. This endeavor may only reach a niche group but it’s fun to make connections with others who have lived a part of this history that is so ingrained in me.”

Marks looks into the future and contemplates how to improve the reach that these libraries have. “My role is to establish the physical archive of magazines and maybe one day someone can take all this to a digital platform,” he said.

The library’s mission is to obtain and preserve all skate mags, including publications from other countries. “Every major country has had a skateboard publication,” Marks said,

As Marks combs the Earth for forgotten magazines in need of preservation, he tries to live by his motto: “Keep doing the work and keep looking for new ways to reach people.”