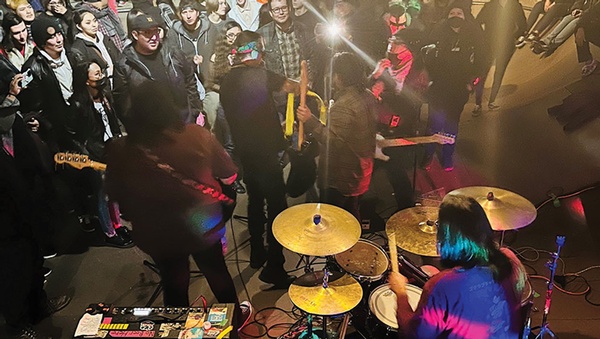 Recently, a student from Big Picture High School, Casper Baxendale, reached out to me for help on a senior thesis on how music helps create, shift and shape community. Casper also asked how we could incorporate other perceptions and voices into this conversation. It just so happened, The Hive hosted a show the previous weekend featuring primarily Native bands, including Lo Cash Ninjas, from Shiprock. We all sat down at The Hive’s office to view the topic through a Native and specifically, a punk rock Native, lens. Even from behind closed doors, the booming of a double bass drum, squealing guitars and a bass tuning shook the room and made for a perfect backdrop for an all-black-leather-and-stud conversation.

Lo Cash Ninjas have been playing music for 12 years, touring across the country and focusing on building community and unity through punk music on and off the Navajo Reservation. On March 12 at The Hive, they played with five members – one who was a former student of the band’s front man, Jordan Steele, who is also a middle school English teacher. The former student, who attended the show, was pulled on stage and handed a guitar. He ended up playing the whole set with as much skill and poise as the other members of the group.

Steele spoke of his experience in the punk scene and the importance of passing down culture and creating a welcoming space for youth. Steele said when the band formed, the music community in Shiprock consisted mostly of metal bands. “We were kinda like the oddballs, since we were playing punk rock, but we endured,” he said. “From there, we branched off further into the reservation where we met tons of people through punk rock music.”

Once established, the band always made a point of cultivating the scene by bringing in more bands and encouraging newcomers. “If I see kids when it’s their first show, I go up and introduce myself so they don’t feel like oddballs. I’ve met some of my best friends that way,” he said. “Now we’re all old, and I still want to pass on that welcoming feel.”

Steele also organized events on the reservation to address community issues and found that music always helped nurture unity. “With a lot of the issues happening within our reservation and outside – whether it be social or resource extraction – there is definitely a lot of music and community behind it,” he said. “I don’t organize as much anymore, but I still put on shows and bring people together.”

Lo Cash Ninjas have performed at the Navajo Nation Fair for a handful of years and love how it brings members of tribes from all over the country to share their talents, arts and music. Jacob Belin, drummer, said over the three days of music, the band meets artists from both on and off the Rez, which further fosters the sense of community. “Sure enough, when we go out on the road and visit these other territories, now we have homies there,” he said. “This brings a community from afar to ours and ours to theirs, and there’s unity in that,” Belin said. “We meet new people through playing music, and I am glad to be a part of it. It’s like meeting with old friends after a while, and you can feel that sense of home, even away from home.”

The band found true passion in punk, and its members recognize how playing music has greatly benefited their own lives as well. “Where we’re from, there’s not a lot to do, not a lot of jobs; it’s really easy to get into bad habits,” Codi Jackson, guitarist, said. “For me, I was lucky to be raised in a background where my dad and brother played guitar. So it was really easy for me to fall into the music.”

Drummer Belin chimes in, “Sometimes people don’t know how to express themselves, and music for me was that gateway to be able to put out my rage and pent-up anger. In a way, I’d say it helped save my life. If it weren’t for music, who knows where I would be right now?”

For Jackson, inspiring others has become a personal endeavor. “I really want to inspire Native kids to sound like themselves,” he said. “I hear a lot of Indigenous artists sing about Native issues through different types of music, but no music that sounds Native. So I’m hoping there will be a group of Native kids that can pick up drums, a bass and a guitar, and when they play, sound Native. That’s how we can take the music back.”

Indeed, the very music most of us listen to has been stolen and white-washed, and the band wants to help people recognize this and use it as further inspiration to young Native musicians. “We always give homage to Black people, because they created the music; we play punk rock, reggae and ska – all that comes from Black people,” Steele said. “White people think that they have ruled the industry, and that creates a lot of white supremacy embedded in the music. We tell kids, people of color can still do it, if we can do it, the kid at home can grab the guitar and do something.”

At the end of our conversation, Belin added some last words of encouragement. “Take the chance to express yourself; some people don’t take that opportunity,” he said. “It’s never too late. See where it takes you. You could be sitting on a masterpiece. There’s truth, emotion and humanity to express, and music can be that gateway.”

If you have Rock N Roll stories you would like to share, upcoming gigs or are looking to join or build a band, contact your Rock N Roll Sweetheart Alex Vick at anvick38@gmail.com