Noodlin' round
From dorm rooms to sold-out shows, Durango band Noodle is on the rise. 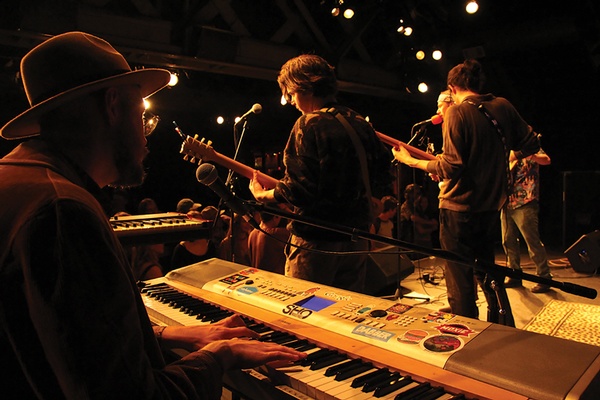 Durango-based band Noodle is set to play their first show since the pandemic.

It’s a Thursday night on Richard Drive in northeast Durango, and I walk into a typical college rental – beer cans on the kitchen table, empty toilet paper rolls on the bathroom floor. But the music being played in the house is anything but typical. This is the first Noodle practice of the year.

I’m sitting on a couch that could sit six but is only comfortable in three well-mapped locations. Taking it all in, I’m pierced by the funky swing and folky-psych energy of the group. Matt Kolbe, on the keys, said the band “wants to achieve a timeless sound and play covers that have aged well.”

Noodle pays homage to technical classics by Pink Floyd, The Doors and Steely Dan. But the band also plays originals. “Lester One,’’ authored by Kolbe, changes in tempo, key and rhythm so many times it’s hard to keep track, and yet all the transitions are seamless, like the song is woven into a beautiful, intricate tapestry.

“This song is like a journey,” Clay Kinder, manager of Noodle, said. “It takes you places.”

Noodle was founded by Kolbe, mandolin player Salvador Sharp and guitarist Alex Eckler after the three starting playing music in a Fort Lewis College dorm room their freshman year, in 2017. From dorm room jamming to opening for Leftover Salmon in August 2021, the band has transformed with multiple musicians and styles. Now, the band consists of six members: Eckler and Eli Emmitt on guitar; Carlo Fourzan on bass; Sharp on mandolin; Alec Mayes on drums; and Kolbe on the ivories.

The first time Mayes played with the band, he had never heard the songs – he was called last minute to fill in for a backyard gig. “I just played from the hip,” he said. Almost immediately, he felt that special click musicians experience when playing together. “Noodle also already had a built-in fan base, which gave good motivation to show up for the fans,” he said.

Fourzan came aboard after seeing the band play and noticing there was no one on bass. “I walked up, asked if they wanted a bassist and then I was in.”

Emmitt, the newest member of the group, said after he joined the band, it quickly started to feel like family. “There’s camaraderie among the members; everyone adds elements and it creates a family feel,” he said.

Kolbe agreed. “There’s collaboration working together for a greater goal and everybody gets a chance to rock it,” he said.

Sharp said because of the different personalities in the band, it creates a fuller sound. “There’s a lot of diversity in what we like to play and listen to,” he said.

This labor of love in creating a family of musicians has also pumped good things back into their community, friends and fan base. Kinder, the band’s manager, was just a friend who wanted to see his buddies succeed in their musical efforts. Equal amounts of help and support have come from other unofficial members of the band in forms like art, flier making and recording. “We believe in these guys,” said Kinder, with a look of endearment in his eyes.

This sense of community has run strong for five years and has propelled them to where they are now: opening for Liver Down the River in a sold-out 2019 show at the Animas City Theatre, and headlining their own show before the pandemic at the Durango Arts Center.

And now, they’re back with a show at The Hive, 7 p.m. Fri., Jan. 28. Whether you’re young, old, folky, rock ’n’ roll, funky or psychedelic, Noodle has a sound that spans genres.

“Noodle puts Americana on a modern stage,” Kinder said. “It’s a sound that fits for everyone. It’s unique and fun, yet familiar.”

Noodle loves its fans and it shows in the band’s live performances, which practically create a glow in the room. Sounds like the perfect party after the Snowdown Parade (planned for 6 p.m., Jan. 28.)

You can also check out Noodle’s newest album, “On a Whim,” recorded in December 2020, on Spotify. Each song has its own flavor and personality, so give Noodle a listen or come see them live to get a taste!