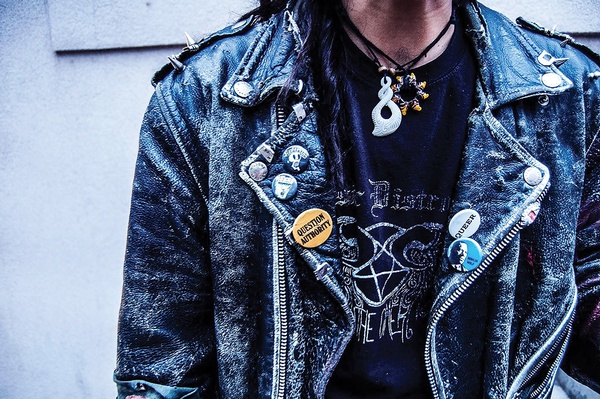 Durango’s rock ’n’ roll scene has seen its ups and downs over the years, from brightly burning support to merely glowing coals, nurtured by only a few. As of late, though, it seems as if it is back on the rise. A few local bands and new DIY venue spaces are working to fan the flames of alternative music in hopes that it will burn bright and draw more folks into its warm glow again.

In the 14 years I’ve lived here, I’ve heard stories – what seem like legends – of a punk rock heyday here in Durango. Local shredders like Bubba Iudice, Josh Darien and Tom Bonanno played with The 13s, the Neighbors and the Randibles, which once pioneered punk in our town. Bonanno reminisces about dressing up in skeleton outfits and playing packed gigs at (the now defunct) Summit, where it felt like the floor would collapse into the pizza shop downstairs. The shows punched out energy and hits, but eventually they just kind of fizzled out.

Attending high school in Pagosa Springs, my upbringing in rock ’n’ roll and alternative music began with playing in hay-filled, manure-smelling barns as well as million dollar mansion-cabins where every little knick-knack shatters just by looking at it. We could only play the high-dollar venues when someone’s parents were out of town.

As a result, I would pilgrimage 60 miles from Pagosa in a friend’s van or beat-up sedan for small punk and hardcore shows in a basement venue at Fort Lewis College, aptly named The Extreme Room. Every couple of weeks, a true searcher could find a dimly lit room full of bad haircuts, smiles, skinny jeans and heavy tunes by local and regional acts such as Arvella, Uprooted, the Dugouts, April O’Neil and Beyond the Citadel of Coup De Gras.

Monica McManus, a local rock enthusiast, reminisced abut the time her band, the Noodles, played The Extreme Room on International Women’s Day in 2008, with the bill packed with all-female or female-led acts. “That place was punk rock as hell!” McManus said. “It was a shame when they took it out and didn’t replace it.”

It feels as though when momentum is gained and the fire starts to burn with enough intensity to bring in bigger acts, circumstances seem to snuff the fire back out. With the demise of The Extreme Room, a rock ’n’ roll drought seemed to fall over town. But slowly, it came back. Small shows could be caught in closets and hallways, small houses packed with sweaty kids looking for their fix. Eventually, the levee broke, more punk bands sprouted up and there was a true call from the community, “We want to listen and feel!”

The Everynight, a DIY house venue, popped up around 2015 near the Everyday Gas Station on 8th and College. It its short time, it hosted bands like Laboon, Toast Ghost, Dirty Faces, Long Con, Sober as Hell, God Awful, Lumpy and the Dumpsters, and Nude Dude. While these shows were great for exposing newcomers to new music, a handful of the gigs were shut down by the police or for neighborly concerns. Seeing the excitement and need for alternative music, a group formed in hopes of securing a venue that would allow for a safe space where punk rock could be nurtured without the naysaying of venue owners, sound guys or police.

In 2016, Sweet 101, a community collective in an upstairs space on Main Avenue, was born to give local musicians and artists an opportunity to perform while knocking down some of the barriers new acts face, such as not having music recorded or a band “resume” to secure gigs. It was a success. Bands came out of the woodwork, and the venue pulled in acts from all over the region and even as far away as Canada and Los Angeles. Sweet 101 was on its way to a bright future, or so we thought. After about eight months, the powers that be evicted Sweet 101 from the building for noise complaints.

The scene fell into dormancy, with small shows popping up here and there until COVID put the wet blanket on the smoldering flames. And then, boom! We were released from music deprivation and isolation. This summer, I have seen a swell in the attendance and energy at shows from those craving high tempos and lightning guitar work. The Olde Schoolhouse Cafe opened its doors to rockers this summer, hosting a punk show, and this fall, Punk Rock Breakfast kept the stoke up. Now, we’re headed full steam into the winter with more projects popping up.

Military Wife, one of Durango’s newest prog rock/hardcore bands, has played two shows this fall at The Hive. Military Wife is built of talented shredders creating catchy riffs, technical lines and huge hits. “There’s kind of everything (music genres) in Durango, even though it is saturated with bluegrass and funk,” Military Wife bass player Gab Kaplan said. “Every punk show has popped off ‘cause there’s a call to it. It’s all word of mouth, which creates a real close community, and it’s cool to have my hand in part of it.”

Kaplan went on to explain the challenges of playing in a rural community. “All my friends and I want music to be in our lives, and it is difficult in a small town to be able to chase our dreams properly while feeling financially stable. More opportunities need to be available.”

With a shaky history, the local rock ‘n’ roll scene needs second and third chances. Be vulnerable, go see a show by a band you don’t recognize, jump in a mosh pit and release the aggressive emotions we all feel in a healthy and uplifting outlet.

The Hive, at 1150 Main Ave., has stepped into the role of firekeeper and is working to constantly stoke the flames. The Hive has now hosted three rock shows and intends to keep pumping it out in its sober, all-inclusive, all-ages space. For the low, low price of a five-buck donation, you can be sure to have enough fluff in your pockets to attend and add a log onto the fire. Be on the lookout for hand drawn flyers and kids dressed in black hanging ‘round storefronts and alleyways.

If you have rock ’n’ roll stories you would like to share, have upcoming gigs or are looking to join or build a band, contact your Rock N Roll Sweetheart, Alex Vick, at anvick38@gmail.com ?

Durango’s up-and-down punk scene is on the rise