Revving up
Pair your life's adventures with a kick-ass soundtrack 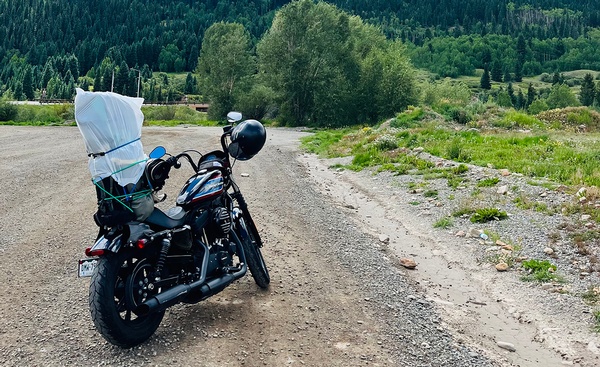 “No-no, no-no, no, no-no-no” – a classic rock tune fired up alongside a guttural cough of exhaust pipes as the engine idled. I could smell gasoline and leather, and adrenaline coursed through my being. “Nobody But Me” by The Human Beinz pumped into my skull under the protection of my brain bucket: “Nobody can do the shing-a-ling like I do!”

The freedom of 55 mph over Molas Pass down into Silverton accompanied by my favorite playlist offered a bliss unmatched. We serpentined into town watching rain clouds build like a crown over Red Mountain. My partner in love and motorcycle companion, Monica Louise, and I loitered outside of the gas station in Silverton to contemplate the weather over the best gas station burger in the state.

“Motorcycle trips are a lot of strapping and unstrapping, followed by a lot of stopping, going, dressing and undressing,” Monica said. I am very new to long distance travel on a motorcycle, but Monica has the experience. “It’s always better to take the time to gear up than to try to tough it out,” she gently reminds me. I heeded her advice and put on the pants. We didn’t have motorcycle-specific rain gear, but we surely had well-worn snowboarding gear. When in Colorado…

Part way up the pass, we could see lightning flashing as thunder boomed in the distance. I revisited the music selection to tailor to the experience – Metalcore seemed to fit the ominous presence of dark clouds. I chose “Hester Prynne” by As Blood Runs Black. The speed and heavy breakdowns perfectly matched the roar of the engine, the cracks of lightning and the building anxiety as I became peppered with raindrops.

I was over-gripping the handlebars, and my Vans high tops were dripping all the way through Ridgway. By Delta, we encountered heavenly clouds lit with gold, and the sun splashed rays of calm and warmth on our shoulders. ABBA’s “Dancing Queen” came on as I celebrated, doing as much grooving as possible on a motorcycle. For ABBA, this means a lot of spirit fingers and jazz hands.

We rolled through farm country with heightened senses. Iron Chic’s “Cutesy Monster Man” came on as we ascended Grand Mesa – a perfect ride with tight turns and tall pine trees. Iron Chic belts out, “I sold my soul, now I age but don’t get old, and to this day it’s the best deal I ever made.” Music has such a magical way of connecting emotion with experience. My musical tastes stretched as long as the horizon, and each song had its special moment along the ride.

“Deep Cover” by Man Man began to sweetly whisper into my ears with a ukulele lullaby rocking us down into our destination. We unloaded at a cabin near Powderhorn Mountain Resort, full of smiles, nacho cheese dip and warm embraces. After an evening of good conversation, heavy tunes and a roaring fire, we pitched a tarp across our motorcycles nestled in a shady grove of scrub oak, drifting in and out of sleep under the light of a nearly full moon. The anticipation of the next day lurked on my mind. I wondered what I might listen to while riding.

After bacon, quiche and goodbyes with new and old friends, we set back out on the road. A doubleheader of tunes by Diarrhea Planet led to fist pumps and feelings of euphoria. We jumped onto I-70, fear setting in, as it was my first time on the interstate. Ripping 75 mph with a throng of city folk in a rush and terrifying potholes left me puckered for most of the ride. Slowly, Elton John’s “Sweet Painted Lady” soothed me and the mach-10 adrenaline slowed throughout my bloodstream.

Then, boom! “Thunder bolts and lightning very, very frightening,” Freddie Mercury’s voice rings in my head. It was time to pull over and gear up once again. Rain was followed by backed-up traffic leading to the Eisenhower Tunnel. I attempted to hold my breath in the tunnel, wishing for smooth travel. I ran out of breath, and it seemed my wish was only half granted. When we stopped next for gas, we noticed a taillight had come off.

I’ve heard it said that “there’s no adventure without adversity,” but remaining open helped the ride and communication between my partner and I, offering us a beautiful adventure. Back on the last stretch of the road, “Party Animal” by Mean Jeans welcomed us into Arvada. We had made it unscathed. After unpacking, we settled into a night of comforts with family, topped off with cake and ice cream on Grandma’s back porch.

Humility is key when learning new things, which I have found to be true in both playing music and riding motorcycles. I encourage you, dear readers, to find something new that captivates and enhances your life. If it’s intimidating, do it. If it pushes you out of your comfort zone, do it. Pursue your big and small dreams, all are worthwhile, and pair the creation of these dreams with an excellent soundtrack.

“If you want to view paradise, simply look around and view it. Anything you want to, do it. Want to change the world? There’s nothing to it.” Gene Wilder’s soothing voice takes us into the sunset as we start down another beautiful road with adventure at every milepost.