The Aztec underground
What it takes to become a rock star in a small N.M. town 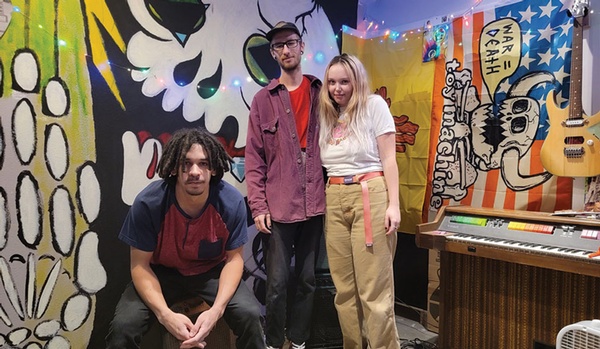 Inspiration can come in many forms and may take years to culminate into artistic expression. As we highlight artists within the alternative music scene, this week, we turn the spotlight on northern New Mexico. Jackson Doom, guitarist for Under/Ground Level, talked with me about the impulse to play music, the boundaries one must overcome and where a musician finds support and encouragement.

Doom, 24, a creative who lives in Aztec, said that his latest spark of motivation came after he joined the Dumpster Beautification Project, a summer art program run by The Hive. The project brings together local artists, at-risk youth and community members of all ages to design and paint… you guessed it, dumpsters.

“My participation felt like I was building toward something more,” Doom said. Seeing the success from committing himself to art and a greater good motivated him to use this same discipline with his passion for music.

Doom describes Under/Ground Level as a garage rock trio that plays a mix of instrumentals and covers from bands ranging from Ween to Rage Against the Machine. But it took years and a community to get Doom to that point.

He started out playing AC/DC covers (“Dirty Deeds”) at first-grade show-and-tells, and from the beginning, he always had support in his musical pursuits. “I can see all the people who stood behind me when I was exploring music,” he said. “I received birthday cards that always said, ‘You are a rock star!’”

These tokens of support may have been small and perhaps, at the time, overlooked. But Doom knew he always had a safety net of positive affirmations when negativity or doubts crept into his mind about the caliber or substance he was trying to achieve.

Despite this support system, there were few options locally where he could participate. Doom said there were some shows at Crash Music (a venue in Aztec now closed) every now and then, but he was underage and couldn’t attend or play shows. A common issue among young musicians, it begs the question: how do you cultivate new and young musicians?

“There were only a couple bar bands that would split their time between the two bars in Aztec,” Doom said. (Doom explained, with a lip-curling smile, “A bar band is like Lynyrd Skynyrd and that song ‘Ride Sally Ride’ for the whole night.”)

The lack of venues and musical options felt isolating. “For a long time, I was only sharing my music with friends; there wasn’t anywhere to showcase it,” he said. So, Doom formed a band in 2020 with drummer Mark Frazier, from Aztec, under the name Foul Tom, spending two years writing and experimenting with their sound. But even during this time, the element of playing live was missing. After getting involved with The Hive in Durango, helping to facilitate visual art, Doom engaged with the music side of The Hive as well, playing shows with Foul Tom.

After two years of playing with Foul Tom, the band decided to add another member, Laurel Pachall, on vocals. The name of the new project became Under/Ground Level, inspired by practicing in Doom’s mom’s basement. “You pull up to mom’s house, which is on the ground level, and then you go underground to the basement,” he said. “That’s where it all happens.”

Under/Ground Level will be making its first public appearance at 7:30 p.m. Sat., Feb. 26, at The Hive, 1150 Main Ave. Also on the bill for the night will be other New Mexico groups, The Mercury Retrograde and Blind Child.

The Mercury Retrograde pulls in musicians from both Aztec and Farmington. The band brings a beautifully fused combo of punk, metal and psyche, executed with kicking drums, lightning guitar riffs and glorious crescendos. Together, this band creates storm-the-gates-type anthems that will leave everyone yelling in chorus.

Now that Doom has found a more established scene here in Durango, he has also taken it upon himself to help new bands get started. Writing music and playing shows, he said, is a collaborative effort. “We have to learn how to get on that level together.”

A show is a larger entity than two to three hours of live entertainment. A show can take months of planning, organizing, promoting and sound engineering. It’s a great deal of work, and as viewers, we only see the tip of the iceberg.

Doom left me with a quote, which hangs above his practice and creative space: “Give it your all, but don’t give it all away.” Let’s take this energy and support local artists and musicians. We can only elevate our community if we put something into it.