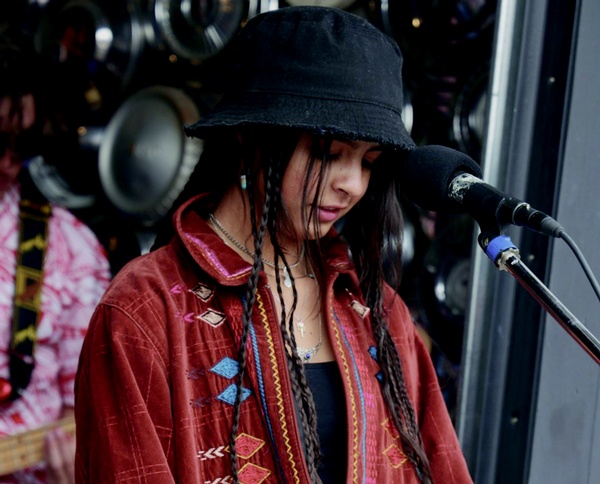 Feedback buzzes from the amp, a muddy power chord roars, voices grow louder as you approach the door, glasses clink on the bar, eight o’clock hits, someone taps on the microphone, testing, testing, test…
It’s showtime. You’ve written some songs, you’re feeling good about them, and you’re ready to share your talent with the world. Perhaps finding a good place in our little mountain town to showcase your talents is a good first step.
It’s intimidating to perform and share songs that you’ve created. Sometimes it can make you feel vulnerable, like taking your heart out of your chest and placing it on the stage while strangers stare at (or ignore) it. As Ted Moore wrote in a previous Plug-iN article, “You have to get those reps in. You have to start separating the good notes from the bad.” So where are some good places to share your songs? Or if you don’t yet have any original songs but – somehow, somewhere – the performance bug has bitten you, where can you start?
Open mic nights.
Open mic nights are usually laid-back environments for people of all levels to share music with an encouraging audience and, luckily, Durango has some really great ones. Playing at open mics is a fantastic way to test your stage presence, share ideas, hear other musicians, have some laughs and gain confidence. The best way to overcome stage fright is to get in front of a live audience. The more you do it, the less scary it becomes.
The sun is out, the river is raging, everything is blooming and we are seeing each other’s faces again. All around town, there are lots of places hosting open mic nights.
Mountain Monk Coffee hosts an open mic on Saturdays from 6-8 p.m. Mancos Brewing has an open mic on Sundays from 1-4 p.m. They have a lot of folk and country musicians, and the vibe is laid back and welcoming. 11th Street Station has a comedy open mic on Tuesday at 8 p.m. Different open mics have different vibes. Scout the scene. Check some of them out and see which ones you like best. See The Durango Telegraph events page for a complete list.
One place in town that always seems to have a crowd and some great local talent is Moe’s Starlight Lounge, which has an open mic every Tuesday from 7:30-9:30 p.m. I recently had the opportunity to speak to Dylan DiMeglio, a.k.a. SunnyD, host of the Moe’s open mic night.
What is it like running open mic night at Moe’s Starlight Lounge?
Hosting open mic has been nothing short of a blessing for me. It has built my confidence as a musician and as a social human in a place in my life where I felt like I didn’t have a lot of friends. It’s also been incredibly opportunistic. Since taking on open mic, I have become a bartender and now have my own band that I am looking to gig with this summer.
What would you say to someone who is going to their first open mic night?
I would say as a performer, the best thing you can do is just get yourself up there. You’re always your own worst critic, and this community is wonderfully supportive and open to collaboration.
What is your favorite thing about running open mic night?
My favorite thing about open mic is honestly getting to create and express myself around other creative people. Whether it’s playing with my band, Hudu, dancing or enjoying a super meaningful piece of music someone shares, the joy I feel from seeing others bare themselves on stage and doing it myself is truly unmatched.
Moe’s has created something really special here. Matt McDermott (part-owner and manager of Moe’s) and Rachael Collier (bartender), and now myself, have done a great job at creating a welcoming and safe bar experience. I believe that’s a huge reason why so many people have been coming out, and it’s become something of a “can’t miss’’ for a lot of musicians in town. I love my open mic almost as much as I love everyone that shows up.
***
So that’s the “where.” What about the “how?”
Just learn some covers and head to an open mic. Everyone loves a good sing-along – especially when there’s beer involved. If you’re a songwriter but you don’t play an instrument, ask someone to collaborate. Also, don’t forget to bring friends as a built-in support network. The time commitment is minimal, drinks are available and the reward is the exhibition of something you’re passionate about. When you attend these events, you will meet other creative people who share a love for music.
For those of you out there who have only played in their bedrooms, garages or basements, I challenge you this month to check out one of the local open mic nights and perform one song. You never know what could happen.
Until next time, we’ll see you on the scene.