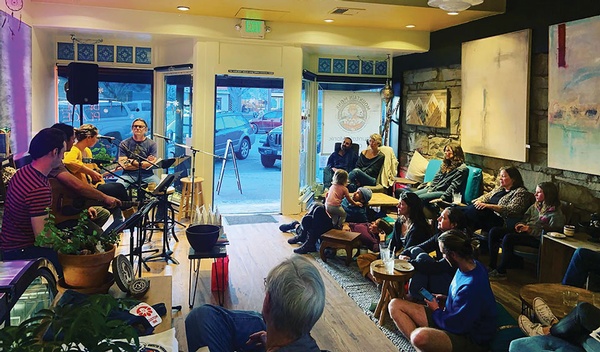 The Gathering at Mountain Monk Coffee is one of many opportunities to share songs./ Courtesy photo

The title songwriter conjures different images – anything from a college student busking on a corner to Bob Dylan, a Nobel Laureate who has written more than 500 songs and sold more than 125 million records.

Songwriting generally falls between those two extremes. Most songwriters have day jobs and don’t share beyond a small circle of friends, if at all. Countless songwriters don’t sing or play guitar. I have a student who each week is eager to show me a new drum beat. He may not know it, but he is writing songs – songs without words, but that fulfill his need to express himself.

Songwriter stereotypes prevent many folks from pursuing their inclination for musical expression. Until recently, local musician Michael Ryan had never shared his songs. Now, he’s a compelling advocate for the benefits of plugging in creatively and overcoming fear. As a regular attendee at iAM Music’s Songwriter Series and founder of The Gathering, at Mountain Monk Coffee, Ryan talked about the excitement available to the nascent or hidden songwriters among us.

What’s your background in music?

I bought a guitar when I was 18 years old because that’s what you do when you’re 18. You think you’re going to be a rock star. So I bought a 1978 Yamaha 12-string acoustic for $250 and took a couple of lessons. I just set it in the closet and would take it out every now and then. And then a long stretch of life happened. Thirty years just came and went. I never played. But about six years ago I started playing again.

What does songwriting mean to you?

Songwriting has been my therapy, my meditation. It’s where I find comfort. And I would sing (by myself, of course) and I would always feel lighter afterwards.

You’ve been a regular at iAM’s Songwriter Series. What’s that like?

Typically about seven musicians come in and perform two or three original songs. The Songwriter Series was one of the inspirations that helped bring me out of my shell. I had turned 60 and I had gone to a couple of those and thought, “Goddamn, I’ve always wanted to do that! I’ve got to get the courage to do this.”

How is The Gathering different from the Songwriter Series?

When we do the Songwriter Series, the artist gets on stage and has their time. With The Gathering, I have three guests along with myself as host. We take turns each playing an original song. Before and after the song we engage in conversation about the song, the process, the individual. We dig a little bit into the songwriting process, what it means to them, what their day job is, what influence music has had on them. The audience can ask questions. Everybody so far is just totally digging it because it validates what they do and gives them an opportunity to talk about what they do, instead of just performing.

What have you learned about songwriters?

Durango has an incredible amount of talent. I am blown away. At the end of each show I’m inspired and I’m intimidated, because they’re just that good. The other thing I’ve learned is that we share a common thread – we’re all passionate about it, we just have to write songs. Nobody’s making a living at it. Everybody has a day job.

There are also differences in song styles. I tend to be a very emotional songwriter. I write a lot about experiences that happened to me – the hard stuff, the heavy stuff. Other songwriters are just more open to things that are happening to them around the world. For them, it doesn’t have to be something bad. They can pull a song out of it. And that fascinates me. You mean they don’t all have to hurt?

You learn about each individual’s process and how they go through it.

What would you say to someone with their own 1978 Yamaha 12-string sitting in the closet?

I would say: Is it a passion inside of you? Does it bring you joy? Is it something that you really want to do? If so, do it. Literally: Pick it up.

If the creation of songs is integral to your life, our April challenge to you is to share one of your songs and listen to someone else’s – a creative exchange grows our community and ourselves.

Until next time, we’ll see you on the scene.