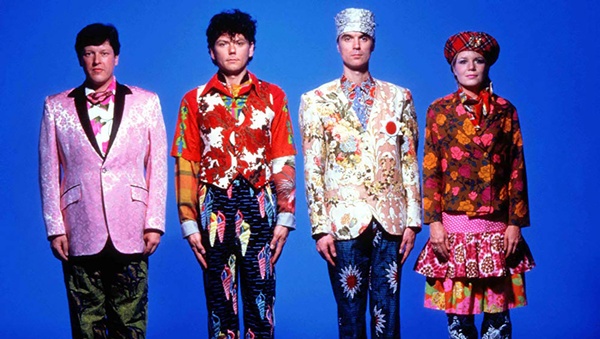 Use your Christmas break to perfect playing your favorite Talking Heads tune. David Bryne & company are the next honorees of KDUR Cover Night, happening March 16, 2019.

My full-time job is development director at KSUT, but I get to dabble in music each week by hosting the Monday “Afternoon Blend” and my “Tales of the New West” show on Wednesday nights. The blends are heavy on Americana, with additional genres like rock, R&B, jazz, blues, bluegrass and world music thrown in for variety. “Tales of the New West” is more focused on country, alt-country and bluegrass. I get exposed to dozens of new records each week.

If you’re searching for some stocking stuffers, here’s a baker’s dozen of the Top Shelf best albums of 2018, starting with my Album of the Year:

2. Calexico, “The Thread That Keeps Us.” There may be no more consistent band in the history of American roots music than these Tucsonans. Part indie-rock, part alt-country and part cumbia, each song on each album is layered in beauty.

3. Brandi Carlile, “By the Way, I Forgive You.” It’s Brandi’s world now. You just live in it. Consider yourself blessed to be able to listen to her heartwrenching tunes.

4. Aaron Lee Tasjan, “Karma for Cheap.” Tasjan has been kicking around for a decade but has really gained steam since signing with New West Records in 2016. While his sophomore album, “Silver Tears,” was a rootsier affair, its follow-up, “Karma for Cheap,” channels 2000s-era Tom Petty with just a pinch of Beck’s urban cool.

5. John Hiatt, “The Eclipse Sessions.” Twenty-plus albums into his career, John Hiatt would certainly be forgiven for mailing it in. Trouble is, Hiatt doesn’t have any idea how to rest on his laurels. “The Eclipse Sessions” ranks right up there with his finest works, “Bring the Family,” “Stolen Moments” and “Slow Turning.” Equal parts elegant and gruff, “Eclipse” is yet another enduring classic from a tunesmith who has few peers.

6. Jesse Dayton, “The Outsider.” Dayton, a native of Beaumont, Texas, who was weaned on George Jones, Hank Williams and Lefty Frizzell, is best known as a sideman. He’s one of the most in-demand and versatile guitarists in the Americana universe, having worked with artists ranging from Johnny Cash and Waylon Jennings to Rob Zombie and the Supersuckers. His 10th solo album weaves politically charged tunes like “Charlottesville” and “Belly of the Beast” with the humorous booze-drugs-and-sex romp, “Tried to Quit (But I Just Quit Tryin’”). There’s acoustic blues, country twang and gritty rock in one tidy package.

7. Town Mountain, “New Freedom Blues.” Longtime favorites of the Durango Bluegrass Meltdown, Town Mountain has always been primarily a vehicle for Robert Greer’s voice (the best in bluegrass the past decade, IMHO). Yet with each passing album, they’ve become a cohesive unit with three lyricists and now, for the first time ever, three strong vocalists. Mandolin player Phil Barker is one of the top songwriters in bluegrass and has always sang some of TM’s most high and lonesome material. On the new record, banjo player and co-founder Jesse Langlais gets to sing, too, with “Life and Debt” becoming the latest in a string of Townie faves. Fiddler Bobby Britt returns to the fold after a brief hiatus to pursue graduate studies overseas. There’s even understated drums throughout!

8. Paul Cauthen, “Have Mercy (EP).” Imagine that the demon spawn of Johnny Cash and David Bowie grows up to be a guitar-toting, acid-tripping preacher and you’ll probably walk the same path as Cauthen. This seven-song set oozes glorious psychedelic country soul.

9. Dave Alvin & Jimmie Dale Gilmore, “Downey to Lubbock.” The album title says it all: Alvin, a native of the L.A. suburb who rose to fame with 1980s punk/rockabilly act The Blasters meets Gilmore, the Zen cool of Lubbock’s greatest post- Buddy Holly export, The Flatlanders. For five decades, both men have blazed the path for what’s now known as Americana. They were even labelmates on High-Tone Records in the ’90s. But only recently have they started working together, first as an acoustic touring duo, then with this fulllength, blues-laden album of originals and covers.

with veterans or their spouses. I can think of no record that captures the enduring pain and resilient human spirit that drives veterans and their families. Songs like “The War After the War,” “Soldiering On” and “Brothers” are essential listening.

11. Lindi Ortega, “Liberty.” Who would’ve thought a child of Canadian and Mexican parents would craft such a texturally diverse collection of goth-country and Spaghetti Western music? Ortega’s latest album, recorded with the Nashville duo Steelism, is one of the most beautiful– and one of the darkest – albums of the year.

12. Whitey Morgan & the 78s, “Hard Times and White Lines.” The best outlaw country comes out of Flint, Mich., you might ask? Blasphemy! But it’s true. The hard-scrabble Morgan spins yarns of the hard life on “Honky Tonk Hell” & the title track, while evoking the spirit of ZZ Top in a stellar cover of “Just Got Paid.”

13. Western Centuries, “Songs from the Deluge.” Of all the bands in this list, the only one I saw live in 2018 was Western Centuries. Their two-hour late-night show at the Durango Arts Center was the highlight of Meltdown for me this past April. Their second album was released just prior to the festival. The Seattle-based Centuries is a three-headed monster that lets singers/songwriters Cahalen Morrison, Ethan Lawton and Jim Miller share vocals and frontman duties. There’s equal parts honky-tonk, blue-eyed soul and psychedelic touches.

Some of the best records of all time were released by the Talking Heads during the ’70s and ’80s. It’s fitting that the next KDUR Cover Night on March 16 honors David Byrne and company. Bands that are interested will need to mark 8 a.m., Mon., Dec. 17, on their calendars. That’s when they can email kdurcovernight@gmail.com to reserve their slot and songs. Bands will be given 10 minutes of stage time on Cover Night.

Say something once, why say it again? Email me at chrisa@gobrainstorm.net.