Quaran-tunes
What to listen to while waiting out a pandemic 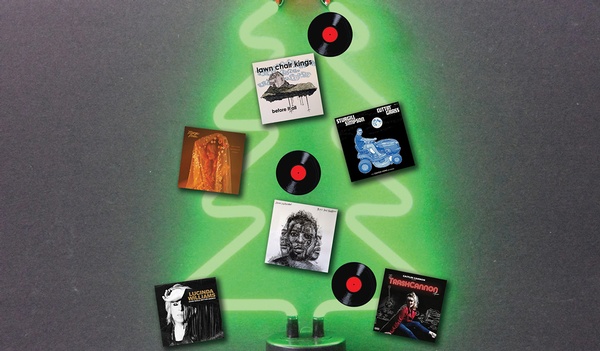 It’s been months since there’s been anything to write about on the music and nightlife front. I felt like a lost sailor adrift on the sea without weekly deadlines to miss and piss off los jefes at the Telegraph. No concerts. No meeting the buddies on Friday night. Hell, I hardly drink anymore. #Sad. Imagine my excitement when Missy Votel called last week and asked for an end-of-year column.

I got to know my 97,000-song iTunes library rather well these past nine months. My living room became my home office, as I only ventured out to KSUT one day a week, usually on weekends when nobody else was around. That meant eight hours of music per day – sometimes on the radio, sometimes on vinyl, but usually deep into my ever-expanding digital library.

Here are a few new things that caught my fancy in 2020:

1. Margo Price, “That’s How Rumors Get Started.” The Midwest farmer’s daughter returned with her third album and veered farther away from the traditional country sounds of her 2016 debut toward something more contemporary, yet eerily familiar. The catchy, wistful title track, in particular, sounds more like “Rumours” era Fleetwood Mac than vintage Loretta Lynn. The rest of the record is solid as well, with the lead single, “Letting Me Down,” and her ramblin’ anthem, “Prisoner of the Highway,” among other standouts.

2. Local vinyl. We don’t even have a record store anymore but that didn’t stop StillHouse Junkies and Six Dollar String Band from pressing wax. StillHouse’s second full-length record, “Calamity,” dropped about a month before the pandemic hit and signaled the start of what was to be a huge year for the Junkies, what with major festival appearances, gigs in the British Isles and signing with a national booking agency. Songs like “Roll it Home,” “Mountains of New Mexico” and “Michigan” still managed to become crowd favorites, thanks in no small part to their Rolling Junkie Revues that swapped festival stages for front porches all summer long.

Not to be outdone, the Six Dollar boys put out “Fire on the Mountain” midsummer. The double LP collects 21 traditional old-time numbers like “Tater Patch,” “Fire on the Mountain” and “Mole in the Ground.” Want to hear the latest from Tony, Brendan, Stephen & Robin? Then you better have a turntable, because this treasure isn’t available digitally or on CD.

3. Sturgill Simpson, “Cuttin’ Grass, Vol. 1: The Butcher Shoppe Sessions.” Despite being young and fit, COVID-19 landed Sturgill in the hospital this summer. He emerged with a vision: to re-record many of his outlaw country hits as bluegrass songs. Sturgill was a bluegrass boy at heart growing up in rural Kentucky and always intended tunes like “Turtles (All the Way Down)” and “Old King Coal” to be done in the high and lonesome style.

4. “On the Road: A Tribute to John Hartford.” I don’t normally go Full Monty on tribute records, but when I fall for them, I fall hard. All the contemporary jam band suspects and a few Colorado collaborations are present on this 15-track collection. Sam Bush, Yonder Mountain String Band, Railroad Earth and the Travelin’ McCourys are all there, along with Leftover Salmon side-projects like the4  High Hawks. My favorites? The Infamous Stringdusters’ handling of “Gentle on My Mind” (a song, it seems, written for Travis Book’s voice as much as it was for Elvis Presley or Glen Campbell) and Leftover Salmon’s “The Category Stomp” (a psychedelic highlight from Hartford’s late ‘60s RCA catalog).

5. Lawn Chair Kings, “Before it All.” It’s no secret that I’m a fanboy of The Nord’s. So when Erik dropped off a copy of the fifth proper LCK album a few weeks ago, I knew it would find a home in my Tundra’s CD changer, probably never to be ejected. The Kings are at their best when they rock, and the 2019 lineup of original members Nordstrom (guitar) and Dan Leek (bass) and more recent additions Patrick Dressen (drums) and Hap Purcell (banjo, guitar) is my favorite of their incarnations. “Runaway Truck,” “Malacrianza” and “Food Fight at the Golden Corral” are welcome additions to their canon.

6. Caitlin Cannon, “The TrashCannon Album.” Our little girl’s all grown up and moved to Nashville and I’m sad/not sad. Quite frankly, she’s way too talented to be our little secret. Tunes like “Going for the Bronze,” “Toolbag” and “Dumb Blonde” are sophisticated and catchy enough for the pop country crowd, yet gritty enough for alt-country snobs like me. But it’s introspective, painful tunes like “Mama’s a Hairdresser” and “Drink Enough” where she wears her heart on her sleeve, airing out all of her dirty laundry for the whole world to hear. Like her friends in StillHouse Junkies, Caitlin’s star was rising in the Before Times. Hopefully the return to normal means she can hang up her hairdresser’s shears once and for all. If Dolly Parton tucked away an orphaned daughter in the San Juan Mountains, she named her Caitlin.

7. Town Mountain, “You Can’t Win ‘Em All.” Social distancing meant Durango’s favorite Asheville band didn’t get to see each other much this summer. But they did release a single midway through the year that signaled a possible shift for the group. “You Can’t Win ‘Em All” is a country tear-jerker that George Jones would have been happy to sing … no coincidence, since Robert Greer’s voice has been compared to The Possum’s countless times through the years. Rather than showcase the ripping banjo and mandolin of Jesse Langlais and Phil Barker (they provide background ambient sounds), the tune is slathered with pedal steel and fiddle, the latter courtesy of longtime Townie Bobby Britt. Barker wanted to write a “last song on the jukebox,” and he certainly succeeded with this slow burner. I can’t wait to see where this leads the band in future years.

8. Songs from the Road Band, “Outside of Omaha” and “Wrong Train Right Time.” How did Charles Humphrey III spend his quarantine? At first, he was on his girlfriend’s landscaping crew. Then he went fishing. And fishing. And fishing. And fishing some more. Whether he was casting flies for Appalachian brookies, browns and rainbows, or on the bay chasing redfish, specs or sheapshead, very few days went by without Sir Charles posting fishing pics on Facebook. But he and the boys did cut a single or three this year. I bought these two the day they dropped. “Outside of Omaha” and “Wrong Train Right Time” will become favorites at future Four Corners festivals, I promise.

9. Lucinda Williams, “Good Souls Better Angels.” Lu is best known for lover-scorned tunes. She finally had enough with the state of American politics to write her angriest and best album in two decades.

10. Devon Gilfillian. 2020 was a hell of a year for Devon. The soul man’s debut album, “Black Hole Rainbow,” came out in January and will likely be drenched in Grammy accolades sometime next spring. With no touring, he then released a stunning recreation of Marvin Gaye’s “What’s Going On” record in October.

Mama, we’re all crazy now? Email me at chris@ksut.org