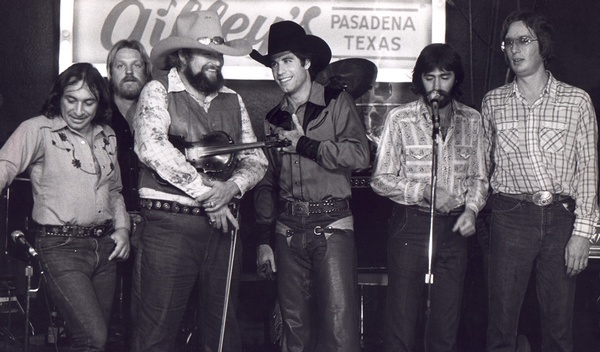 More than a century ago, Ada Habershon and Charles Gabriel wrote what would become one of the most popular Christian hymns of all-time, “Will the Circle Be Unbroken.” Habershon was a lyricist from England who authored more than 200 hymns in English and German during her lifetime. The Iowa-born Gabriel was much more prolific, writing or composing more than 7,000 songs.

Two decades later, in 1927, A.P. Carter of the famous Carter  Family revamped the verses and renamed it “Can the Circle Be Unbroken (By and By).” For nearly a century, his lyrics have stuck, although most versions that followed reverted to the original title. Most notably, the folk-rockers in the Nitty Gritty Dirt Band not only recorded it but named an album after the tune in 1972. That triple LP, which served as the introduction to bluegrass and classic country for millions, paired traditionalists like Mother Maybelle Carter, Roy Acuff, Jimmy Martin and Merle Travis with younger artists like Norman Blake, Vassar Clements and Doc Watson.

In the years since, everyone from the Chieftains to Willie Nelson to Moby have put their own spin on the tune. For country musicians, the song has become somewhat of a national anthem, one that everyone could sing along to during the end-of-night clusterplucks at festivals the world over.

Habershon’s original lyrics (and later, Carter’s revisions), suggested a transition from the pain of the earthly life to a more tranquil heavenly one. But the tune also shows the never-ending cycle of one generation of musicians passing the torch to the next ... the circle of life, so to speak.

Scarborough, founder of the Bar D Chuckwagon Supper and Bar D Wranglers, died May 19 at the age of 93. Back in 1967, Scarborough, Big Jim Blanton and Buck Teeter scouted out land across Colorado to launch a chuckwagon supper of their own. The three were veterans of the Flying W Ranch in Colorado Springs, where Scarborough had performed since 1953. They found a perfect location at the base of Missionary Ridge north of Durango in the Animas Valley. Delmas Dalton owned a large cattle operation there and was a fan of cowboy music, so the trio presented him with a recording of their music. Dalton sold Scarborough and his partners 10 acres at $400 per acre with no money down and the Bar D opened its doors in June 1969. Scarborough worked at the Chuckwagon for the rest of his life, even though he retired from performing on a regular basis more than a decade ago.

This Monday, Daniels died of a stroke at age 83. The Country Music Hall of Famer was a longtime friend of Scarborough’s, sharing the stage as well as the San Juan Mountains with him. Daniels was a once-rowdy longhaired country boy of the 1970s who penned “Devil Went Down to Georgia,” “Trudy” and dozens of other Southern rock hits who was a part-time resident of La Plata County, living north of Hesperus near Mayday.

The two were fast friends when Daniels retreated to his mountain home in between tours. They shared a love of snowmobiling, and Scarborough and his wife, Jeanne, were there when Daniels suffered a major stroke while snowmobiling in the San Juans in 2010, rushing him down the mountain and to the hospital. The two couples dined together frequently, sharing a love for the Old West, the outdoors and music.

Daniels championed the Wranglers, helping them get appearances at the Grand Ole Opry, recording songs with them and, in recent years, joining them onstage at the Chuckwagon.

It’s romantic irony that the two old singing cowboys died within months of each other. They had long since passed their legacy on to another generation, which, in turn, paid it forward.

“It’s kind of like a Western tradition,” local country singer/songwriter Tyller Gummersall said. “In the Western tradition, we don’t bury our heroes, we live them. They live on within you by taking those virtues that have passed down from generation to generation.

“The Bar D is very special that way,” the 30-year-old Gummersall added, noting that high-quality players attract pickers of a similar stature. For the Wranglers, that meant internationally known guests like Daniels and Riders in the Sky joining them at the Chuckwagon.

I actually got to see Ranger Doug and Gary record their instrumental album (2016’s excellent “Springtime in the Rockies”). I feel very fortunate to be in that circle and to be allowed into those moments. When I got to tag along to the Grand Ole Opry with the Bar D, I got to be in those hallways just watching those guys. I got to meet Little Jimmy Dickens before he died. I feel fortunate that they saw something in me.”

Gummersall, who began releasing albums as a 20-year-old in 2010, took guitar lessons from Cook, who frequently joins him onstage and in the recording studio. In many ways, Cook is Gummersall’s mentor. Scarborough and Daniels passed along lessons to Cook, who did the same to Gummersall, keeping that circle unbroken.

To a lesser extent, Daniels helped mentor Gummersall. As writers, the two capture a sense of place. For Daniels, it’s the Dirty South, in such songs as “The Legend of Wooley Swamp,” “The South’s Gonna Do It (Again)” and that little ditty about the Devil. In Gummersall’s case, it’s the mountain valleys and high plains of “Colorado Rain” and “Rocky Mountain Man.”

“He was very gracious and let me interview him for my podcast,” Gummersall said of Daniels, who he interviewed prior to a Charlie Daniels Band concert at the Sky Ute Casino Resort in Ignacio a few years ago. His podcast, “Tales from the Train,” is accessible through Gummersall’s website or Cowboys & Indians magazine.

“They are all so giving and humble,” Gummersall said. “It’s something I don’t take for granted. If I’m ever in a position to help anyone else, I’ll certainly take those lessons to heart.”