A rock & a hard place 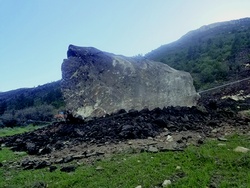 At least that’s the working name given to the 8.5 million pound boulder currently resting alongside Colorado Highway 145 north of Dolores.

For those who may be living under a slightly smaller rock, the boulder and a smaller sibling (weighing in at 2.3 million pounds) crashed onto the road during a landslide Fri., May 24. That was, of course, Memorial Day Weekend.

Although the smaller rock was blasted to smithereens, the larger one remains nestled along the roadside where geologic time had a rare intersection with human time (fortunately, no one was injured.)

Gov. Jared Polis announced Tuesday that the state is opting not to destroy the boulder and instead will re-route the highway around the house-sized rock. In so doing, not only will taxpayers be spared $200,000 but travelers will have a new roadside attraction (and possibly rad new bouldering crag).

“We expect that for generations to come, people will have the opportunity to observe this geological masterpiece that we’re calling Memorial Rock,” Polis said. The cost of the project is expected to clock in at $1.3 million, which will be footed by a combination of state and federal funds.

Of course, no sooner had the dust settled on the so-called Memorial Rock than the twitter-verse lit up with comments.

In an effort to get the rock rolling on a suitable replacement, the Post threw out a few suggestions in a reader poll:

It also asked readers to weigh in (pun intended) on suggestions of their own. Some of our favorites: Trump (“because he’s dumb as one” – their words); Dwayne (as in “The Rock.” Get it?); Rockinlooper; and Rolling Rock.

Of course, we at the Telegraph are never shy with our two cents. Some of our suggestions: Rocky Bal-boulder; Trey (isn’t every guy from Boulder named Trey?); Classic Rock; and Oprah (in honor of the nearby part-time resident).